Pediatric patients can be afflicted by a variety of infectious diseases, from bacterial infections to fungal diseases. While physicians are mostly familiar with these conditions, new challenges arise all the time and can prevent successful treatment. At the Fall Clinical Dermatology Conference in Las Vegas, experts discussed a range of issues facing clinicians regarding interventions and therapies for infectious diseases. Ahead, we recount some of their observations on conditions ranging from MRSA infections to head lice, including clinical pearls for management and prevention.

MRSA infections in pediatric patients offer many challenges to care. The disease itself was first recognized in 1961 and was divided into two types: Hospital Acquired (HA-MRSA) and Community Acquired (CA-MRSA). CA-MRSA is more common in pediatric patients and is increasing in incidence nationwide. It tends to affect skin and soft tissues and is usually susceptible to trimethoprim-sulfamethoxazole (TMP/SMX), doxycycline, and clindamycin. CA-MRSA often presents as an abscess or furuncle, and it may have a surrounding folliculitis. It is can easily be mistaken for a spider bite based on visual presentation. Less common presentations of CA-MRSA are papules and pustules or crusted plaques. There have also been reports of otits externa and paronychia.

Regarding treatment, single abscesses tend to respond to I&D alone, with a cruciate/punch incision (no packing). TMP/SMX and tetracyclines can also provide strong results. Clindamycin has been used to treat CA-MRSA, but resistance can be regional. You might also consider adding rifampin to your regimen as well, as this can provide additional relief. It is also important to remind patients to avoid shared soaps, towels, and towel bars.

Eradication therapies are sometimes employed to treat CA-MRSA, but some of these can be controversial. More reliable eradication therapies include oral antibiotics, chlorhexidine or other washes, and intranasal mupirocin. It's worth noting that mupirocin resistance is on the rise; retapamulin ointment can be an adequate substitution. If you are considering any of these therapies, be advised that there is a percentage of patients that simply cannot be cleared and that long-term success rates have been estimated to be about 25 to 50 percent.

There are several agents on the market for the treatment of head lice that are worth consideration. The first is Benzyl alcohol 5% Lotion (Ulesfia, Sciele Pharma), a prescription agent approved in 2009 that kills head lice by asphyxiation. Ulesfia is indicated for children age six months of age or older. For application, the patient's hair should be saturated in the lotion, and it has been found that two applications about one week apart can be very effective at killing head lice.1 Another agent that has been shown to effectively treat head lice is the antiparasitic agent, ivermectin (Stromectol, Merck). Ivermectin is not approved for the treatment of head lice, however, in one recent study patients receiving two single doses of ivermectin seven days apart were 95 percent lice-free after two treatments (15 days). These results were mostly maintained two weeks after the treatment period.2

Bed bugs became a major story in mainstream media outlets late in 2010, as there were many reports of bed bug infestations in New York, Philadelphia, Detroit, Denver, Chicago, Washington, DC, and other large cities in the US. Since then, clinicians of all kinds have likely fielded a number of questions about bed bugs and who is at risk, how to avoid them, and how to get rid of them. So here is a brief look at some of the more interesting facts about bed bugs, as well as some options for how to treat and prevent them.

Bed bugs are most often early morning feeders. They bite exposed skin, such as arms, legs, face, and neck. They are attracted by carbon dioxide, heat, and pheromones/kairomones. Importantly, not all people react to bed bug bites.

According to anecdotal evidence, anywhere from 20 to 80 percent of those bitten react to those bites. In one recent study of 900 volunteers who were exposed to one to three bedbugs, only 3.7 percent developed a visible reaction to the initial bite. In addition, there was no discernable racial/demographic pattern to the bites. Another study reported that 70 percent of persons in infested facilities reported reaction. In this study, children and elderly individuals appeared to have lesser reactions, but this was not a statistically significant finding.

If you are counseling patients or concerned parents about identifying and avoiding bed bug infestations, experts suggest that 90 percent of infestations occur within three feet of bed. Bed bugs are flat, so they can hide in cracks and crevices. Regarding treatment, it's important to note that bed bug bites can be treated symptomatically. Professional care for homes includes searching dogs and administering sterilizing treatments for home, which mostly consist of heat/steam treatments. 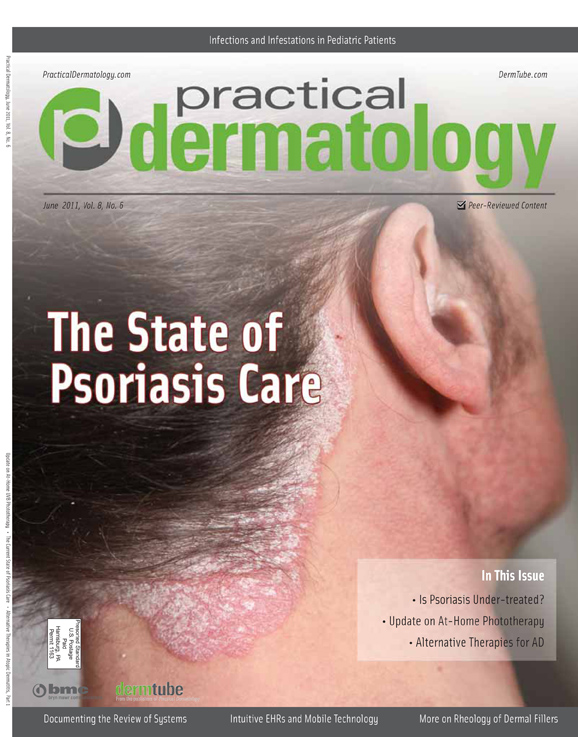