Herbals in the Holistic Treatment of Psoriasis

Dermatologists must be aware of the herbal supplements patients may take and their potential effects.

As patients’ interest in the option to incorporate alternative medicine (AM) into standard medical practice has grown, the medical community has responded in several ways: by beginning to teach related curriculum in medical schools and producing and distributing patient-directed interactive media. A survey of 130 US Medical schools found that around half offered at least one complementary and alternative medicine course or clerkship.1 As evidence of the worth of these efforts, a recent systematic review of the use of complementary and alternative medicine in the general population found that between 34 and 42 percent of Americans have used at least one AM product over a 12 month period.2 These numbers are consistent with what Eisenberg et al. found almost two decades ago, proving that the public’s pursuit of alternative therapies for medical conditions remains strong.3 Results from the most recent National Health Interview Survey, released in 2012, estimated out-of-pocket expenditures for AM in the year 2007 at $33.9 billion.4 Comparatively, $286.1 billion were projected as out-of-pocket expenses for physician services accrued during the same year.5 Reasons stated by patients for using AM include “willingness to do anything, dissatisfaction with ‘standard therapies’ and failure of conventional therapies.”6

It is estimated that only approximately 40 percent of the patients who practice AM (herbals) report this to their physicians,7 often not disclosing information regarding the use of alternative therapies because they do not consider herbals to be pharmacologic (e.g.: a drug with exerts a desired effect on an end organ). Contrary to this, not only are herbals pharmacologic, but they have the potential to significantly interact with prescribed conventional medications.

Psoriasis affects approximately 3.2 percent of the population in the United States (a number estimated as 7.4 million in 2013).8 As an indicator of the importance of alternative therapies in the lives of patients living with psoriasis (e.g.: herbal treatments, dietary manipulation, vitamin treatments), recent surveys indicated the prevalence of AM use in these patients between 42 and 69 percent.9 Patients may combine herbal therapies with standard medical therapies for psoriasis, at times employing alternative or herbal modalities without discussing or disclosing their use to their health care provider.

While not all-inclusive, the purpose of this ‘at-a-glance’ reference table is to raise awareness of the herbal treatments that are used in psoriasis, to aid providers treating patients that are currently using or interested in the addition of herbals to their therapy regimen, as well as shed light on any existing evidence for their use. Provided also are their active ingredients, side effects, and potential interactions with conventional medication. Readers are directed to key resources such as websites by WebMD and Medscape, which both offer information on herbal supplements, their side effects and medication interactions.

Financial disclosure/conflict of interest: Hannah Hill and Mona Malakouti have no conflicts of interest and no disclosures. Dr. Anderson serves as investigator on Psolar study Janssen and speaker (Stelara), speaker also AbbVie (Humira), Amgen (Enbrel), Celgene (Otezla), Leo (taclonex and picato). Dr. Jacob was the Coordinating Principal Investigator on the PREA-1 and PREA-2 Trials supported by Smartpractice USA and serves as a consultant to Johnson and Johnson, Inc.

4. Nahin R, Barnes P, Stussman B, B B. Cost of Complementary and Alternative Medicine (CAM) and frequency of visits to CAM practitioners: United States, 2007. Hyattsville, MD2009.

9. Talbott W, Duffy N. Complementary and Alternative Medicine for Psoriasis: What the dermatologist needs to know. Am J Clin Dermatol. 2015;16(147-165). 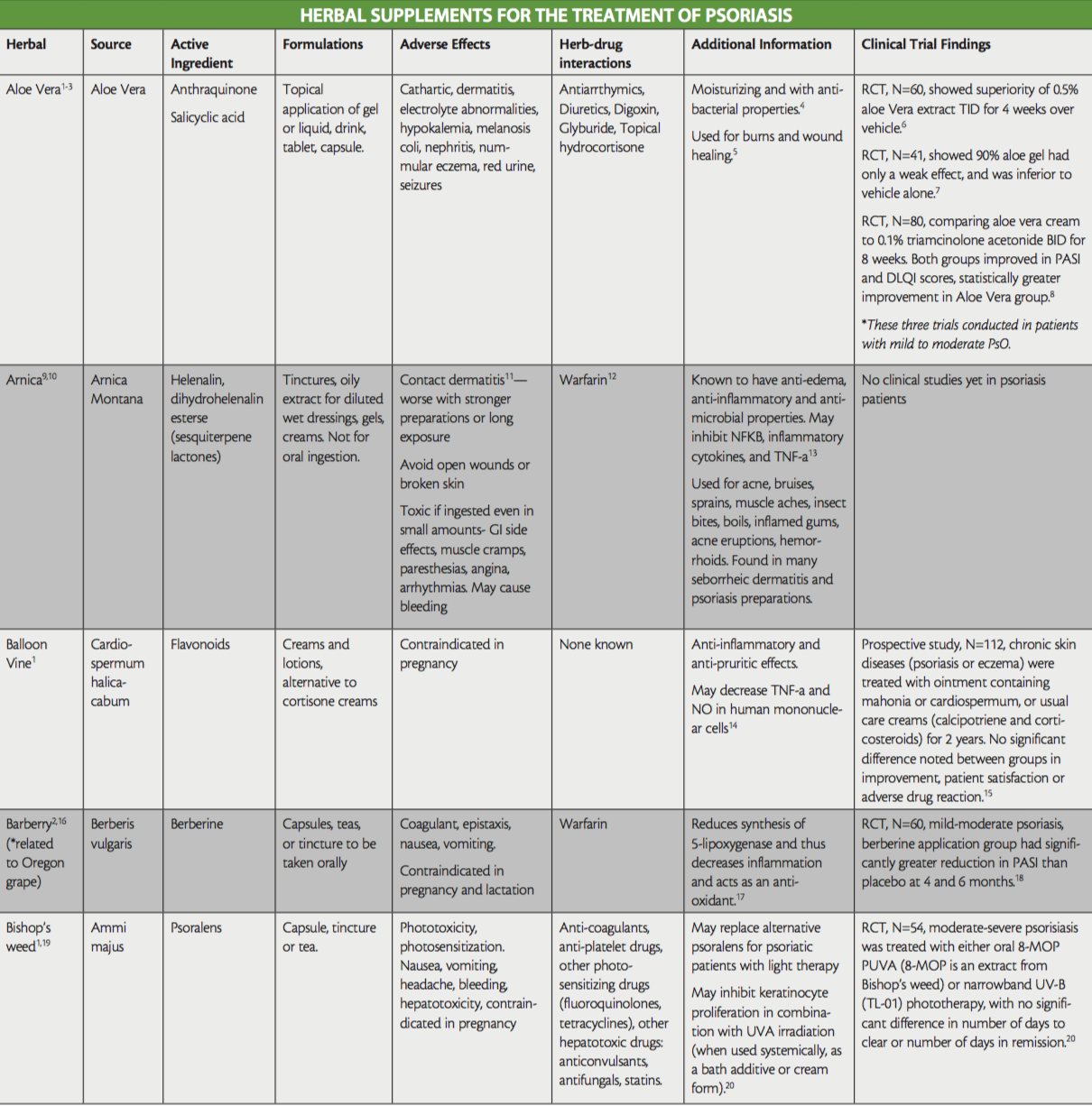 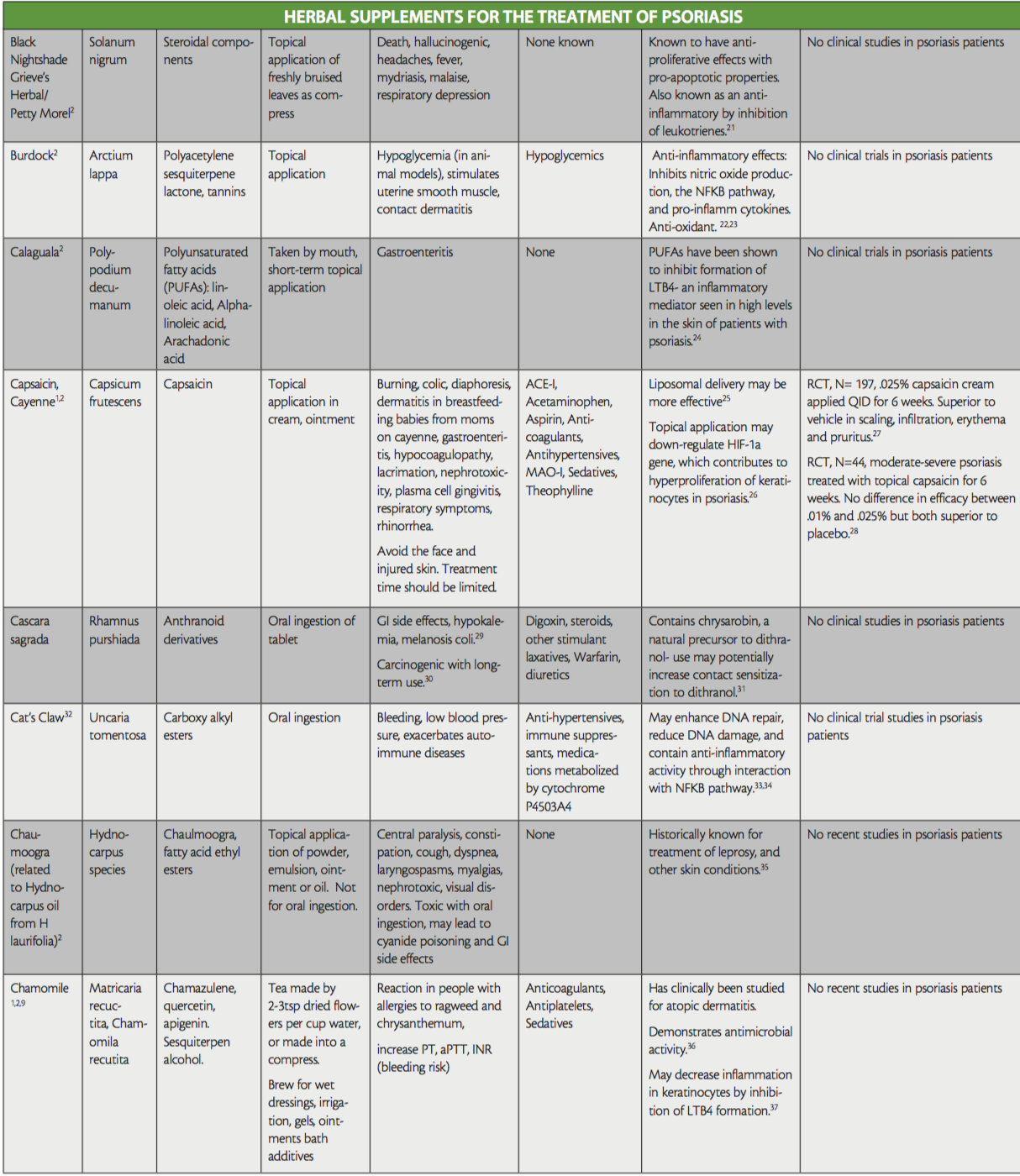 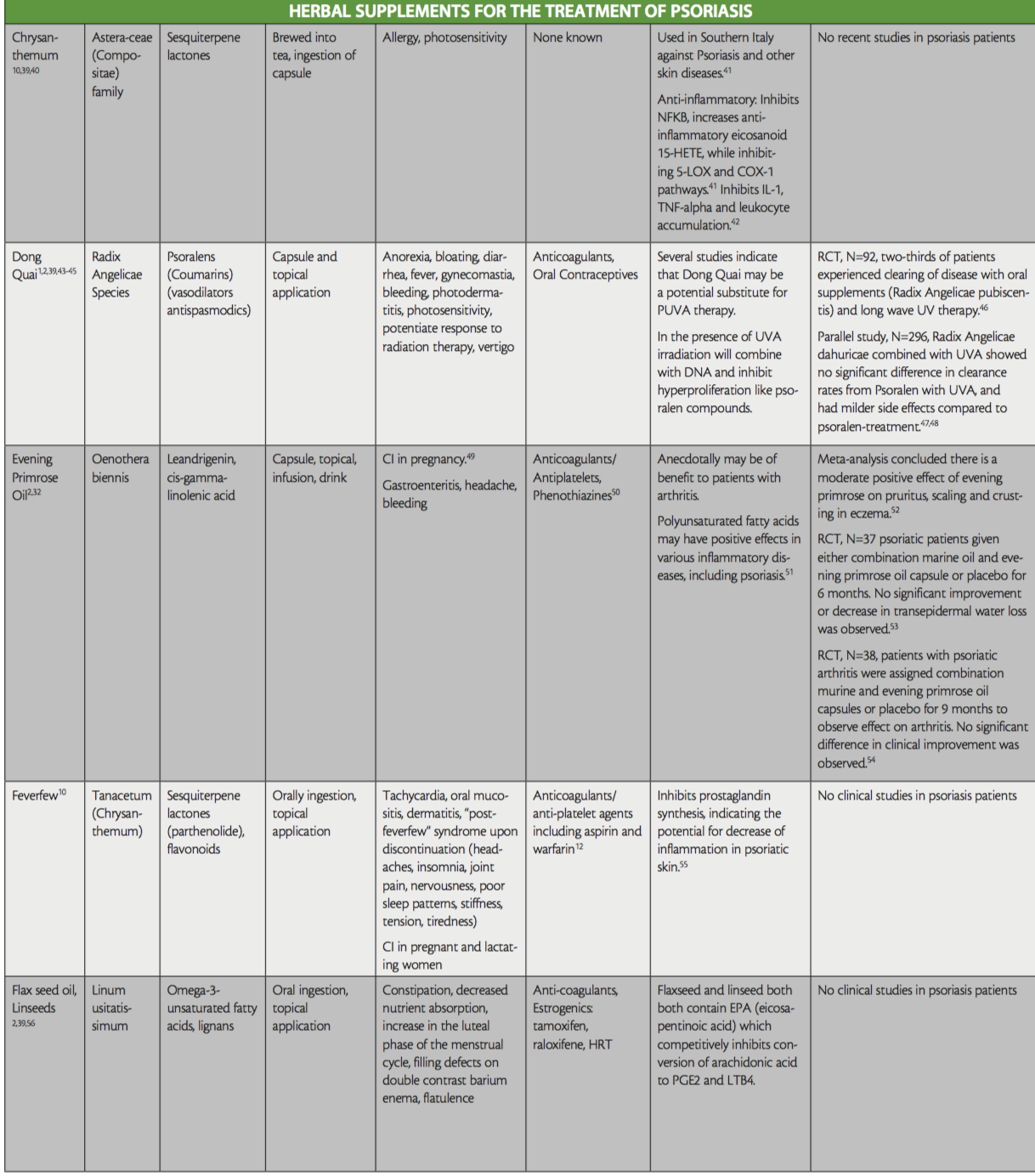 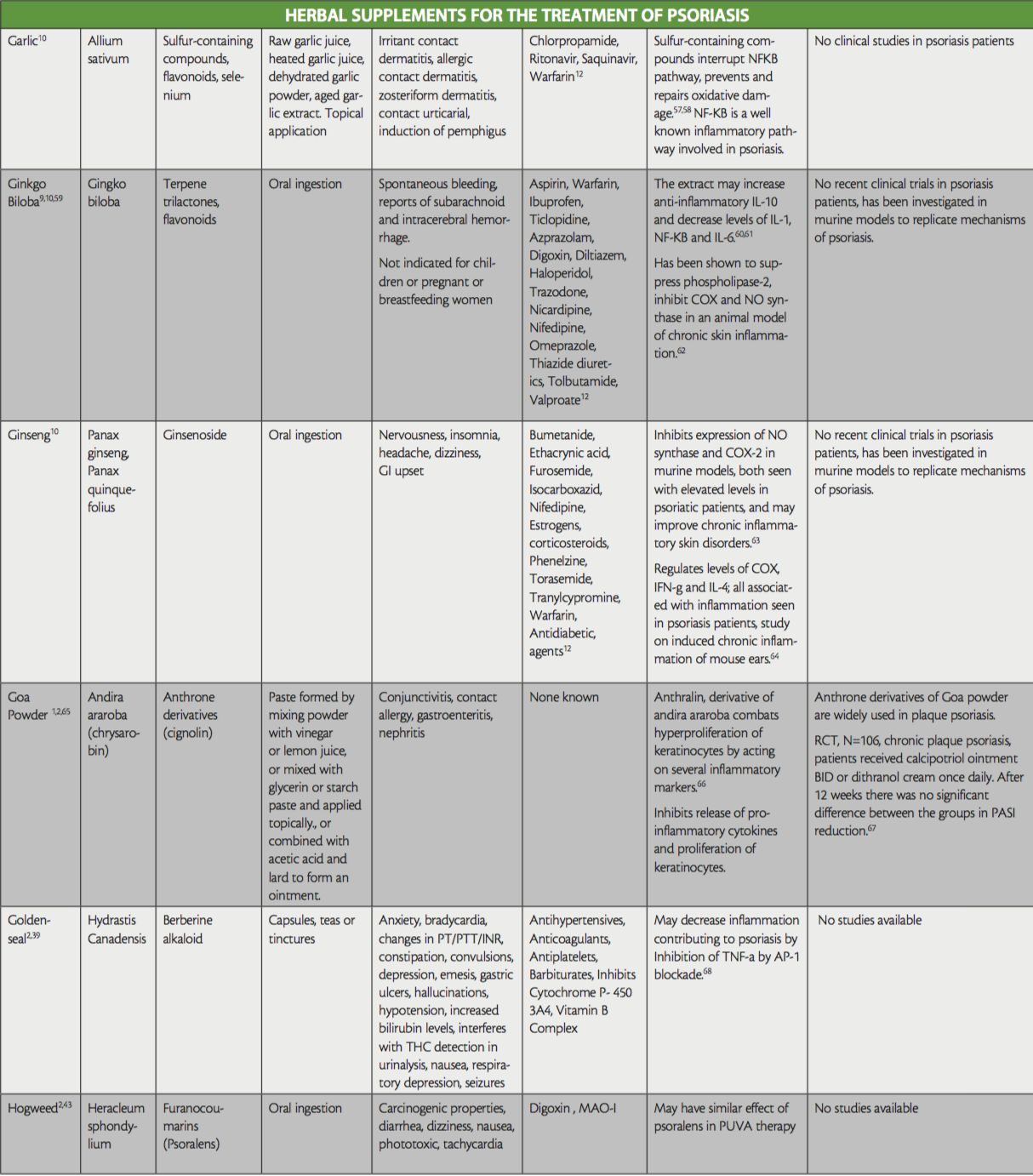 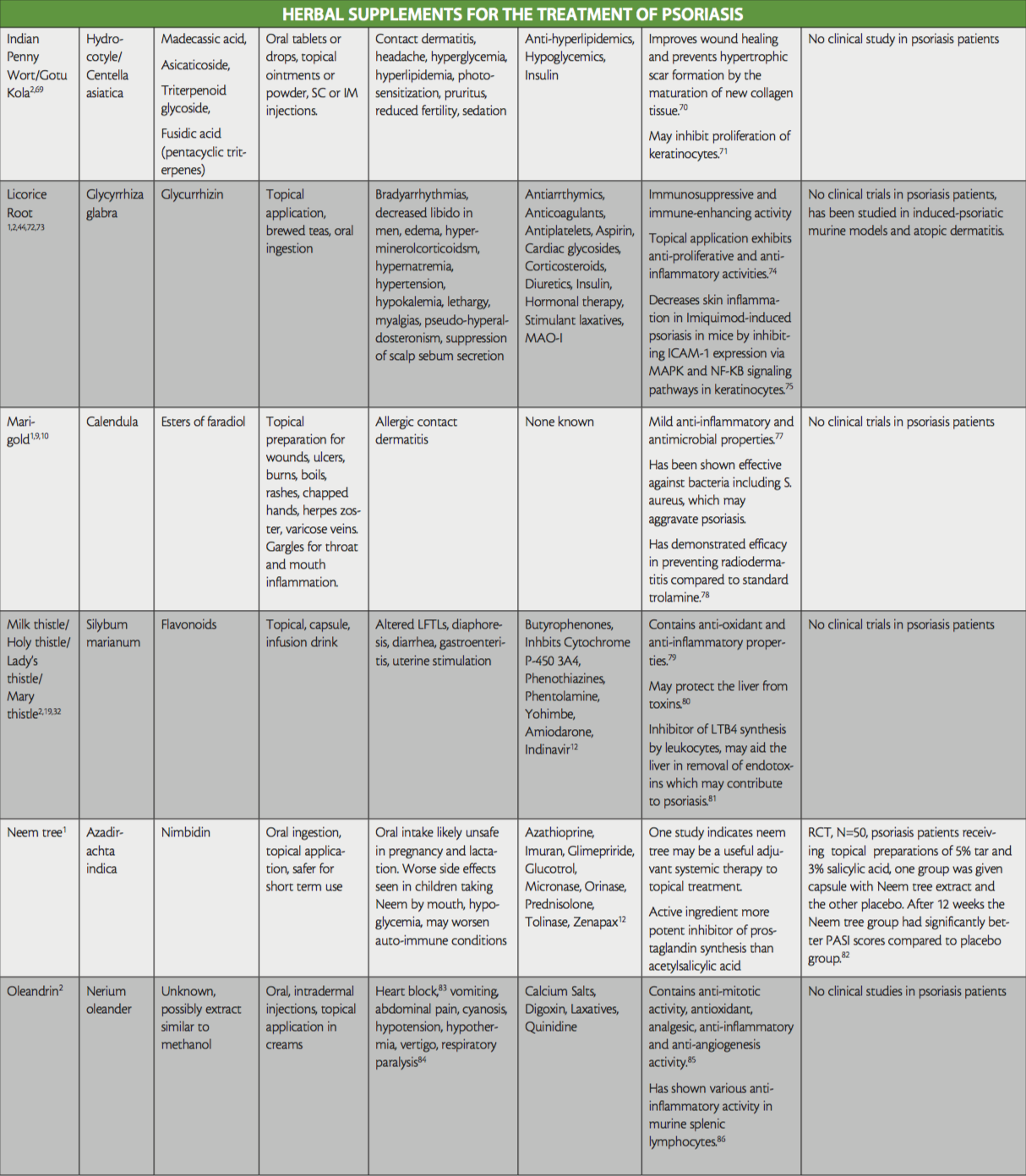 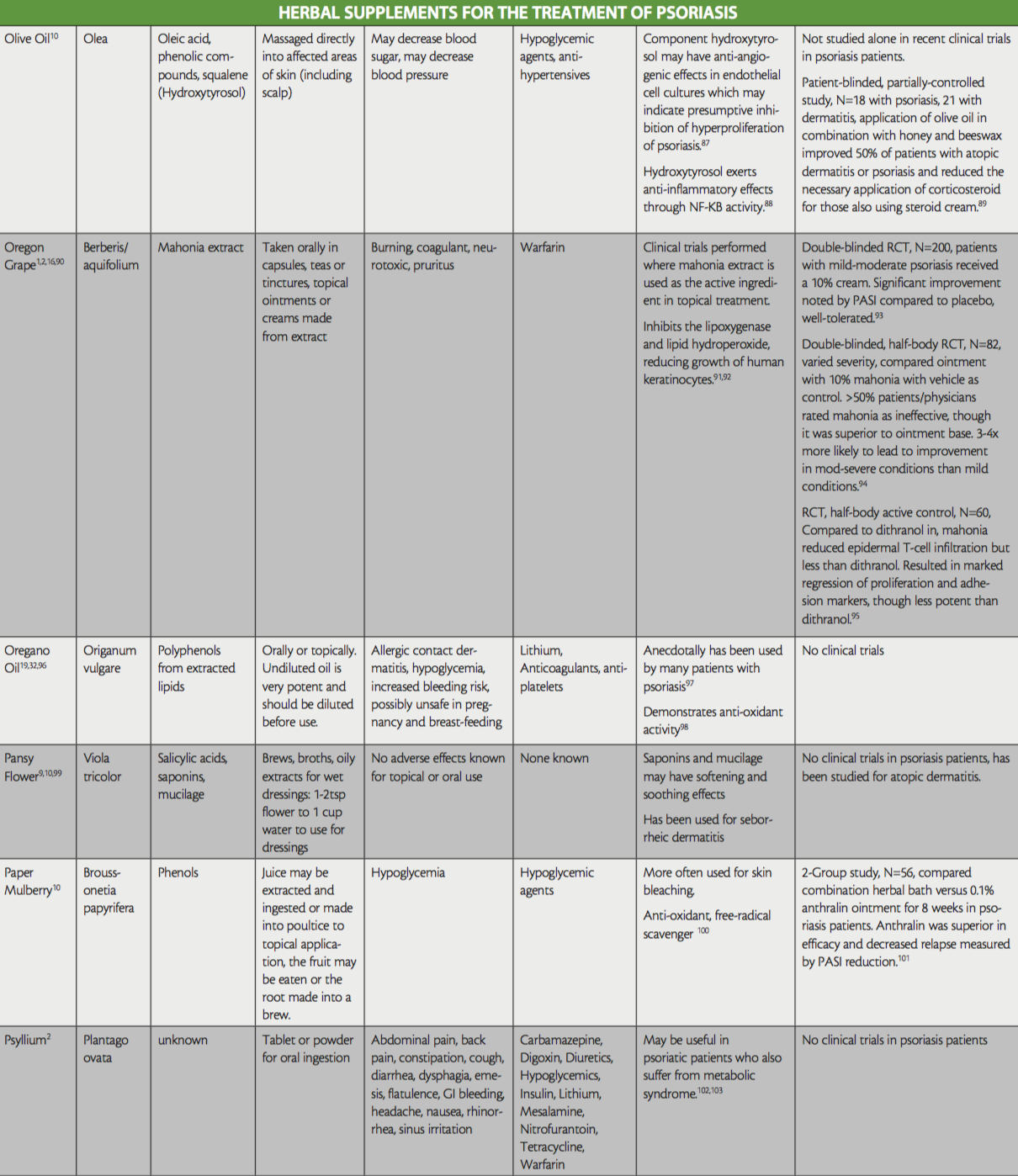 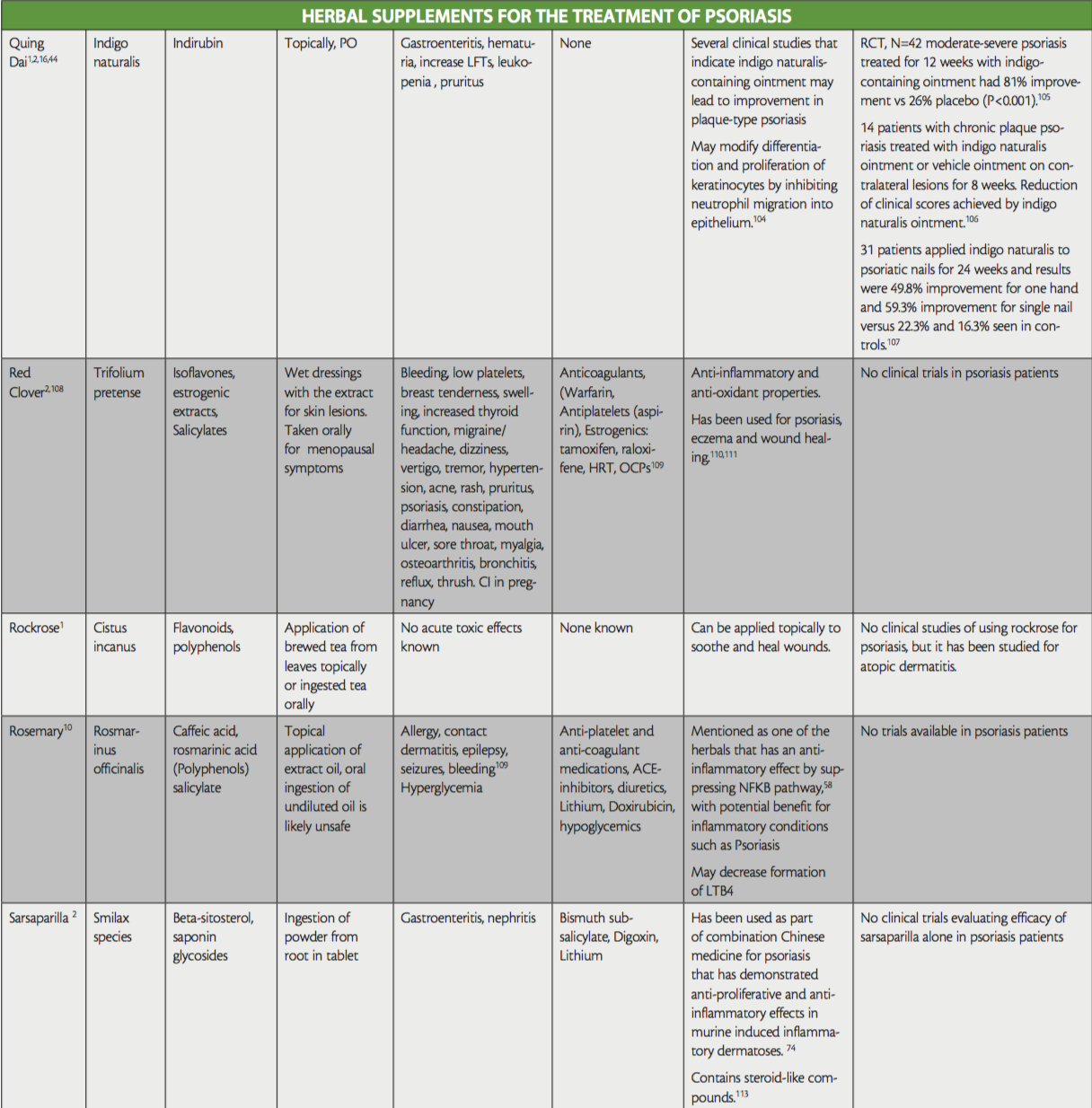 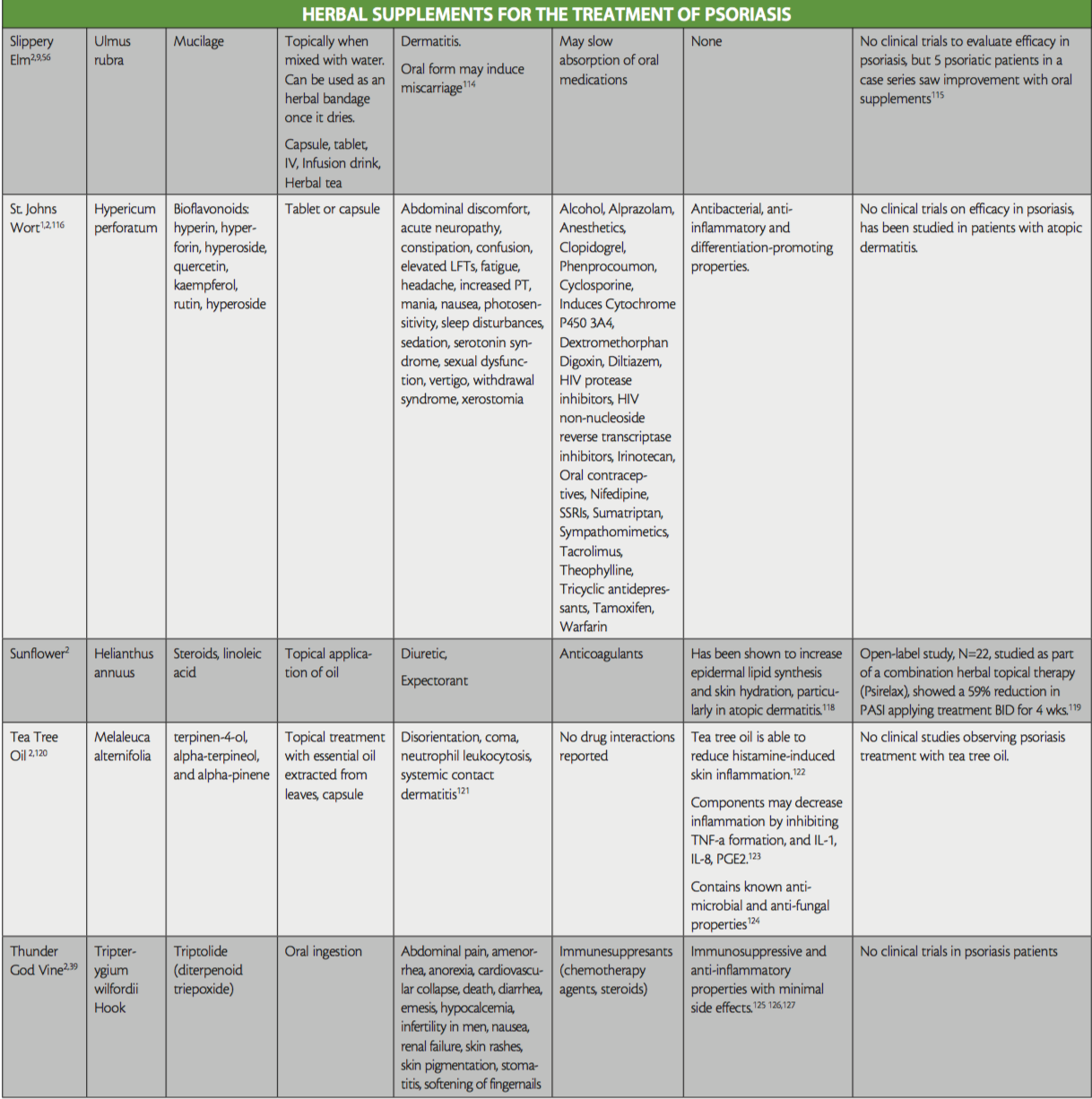 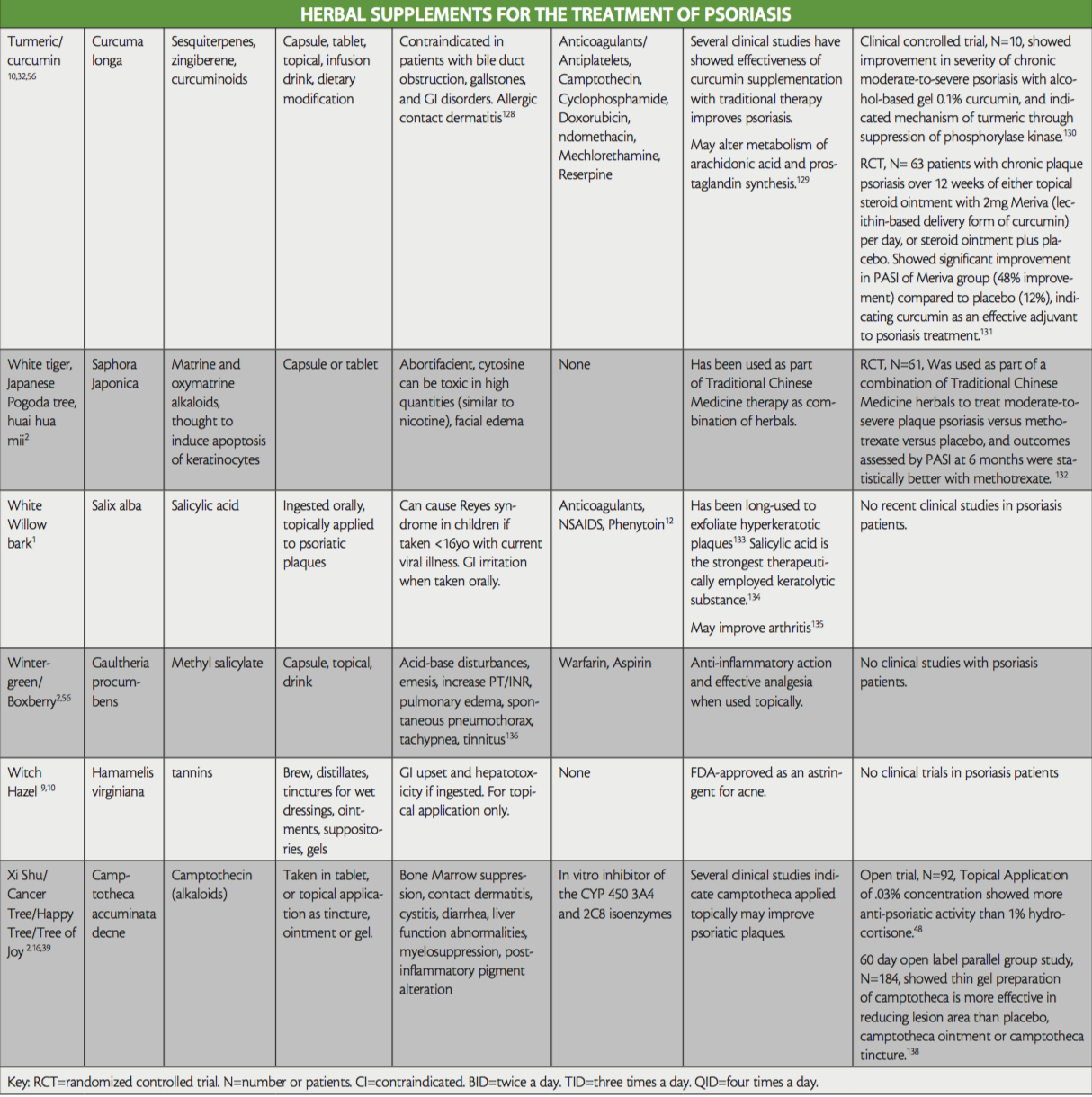 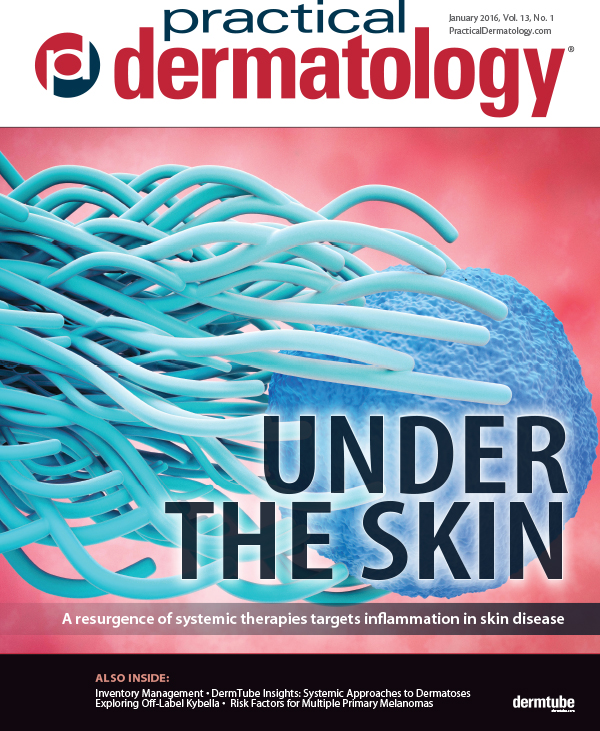 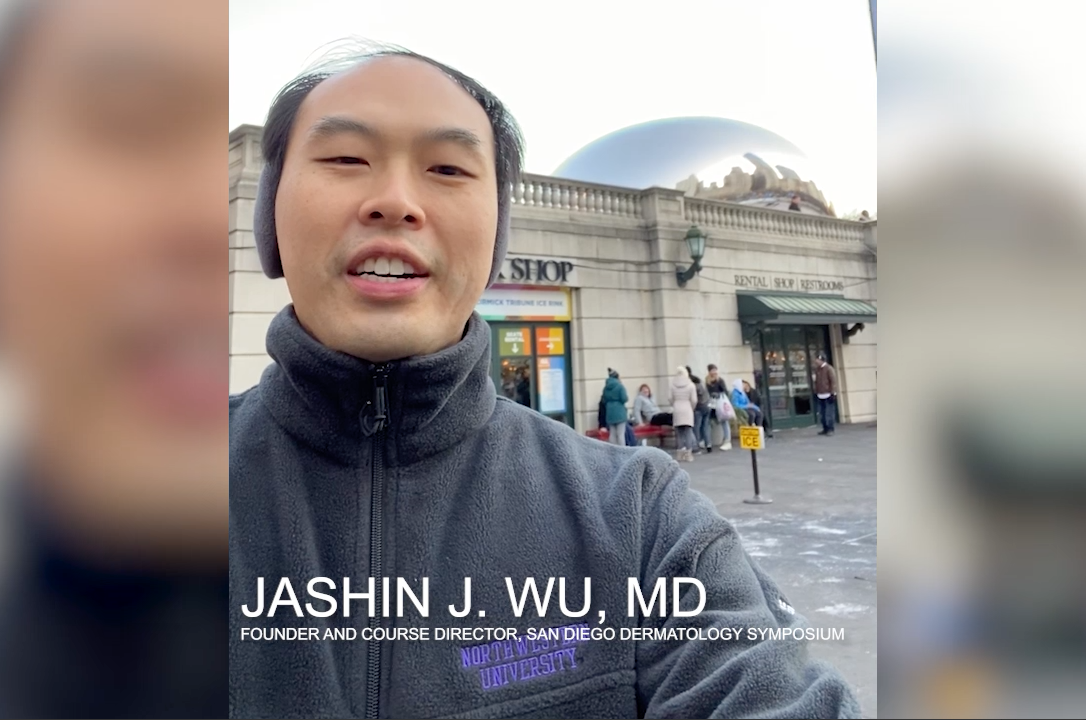 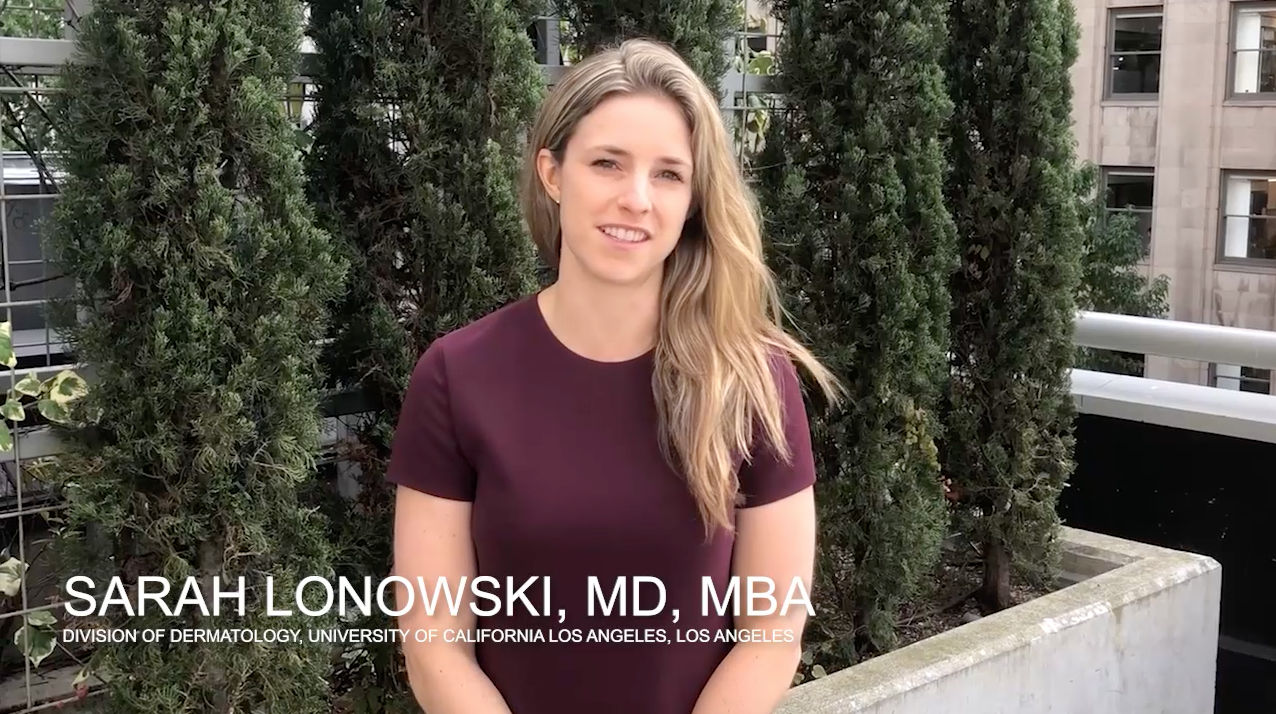