Sexual Harassment and Discrimination in the Workplace: Promoting Gender Equality

Here's what employers can do to ensure that they are following the law and fostering a workplace free of discrimination or harassment.

In the past few years, the #MeToo movement has gained national attention and has turned a spotlight on to the myriad negative issues facing women in the workplace.

As a result of the national attention on the #MeToo movement and other, similar movements, a wave of new legislation has been enacted in several states and municipalities to help address the issues facing women in the workplace.

For instance, last year’s Tax Cuts and Jobs Act passed by Congress eliminated the ability for companies to deduct settlements related to sexual harassment claims that contain a confidentiality or a nondisclosure provision (attempting to ensure that aggrieved parties can share their stories).

Similarly, the State of Washington passed legislation in 2018 forbidding the use of nondisclosure agreements that prohibit (or could be construed to prohibit) discussion of or disclosure of sexual harassment allegations (the law in Washington does allow confidentiality agreements related to settlements of such claims, however).

In addition, New York City passed legislation in 2018, which, in part, extends its anti-discrimination and anti-harassment protections to all employers in the city, lengthens the statute of limitations for filing claims, and requires all employers to post a notice regarding their rights.

Based on the past year’s attention to this issue at the state and local level, employers should expect to see additional, increased protections against harassment and discrimination in other jurisdictions. 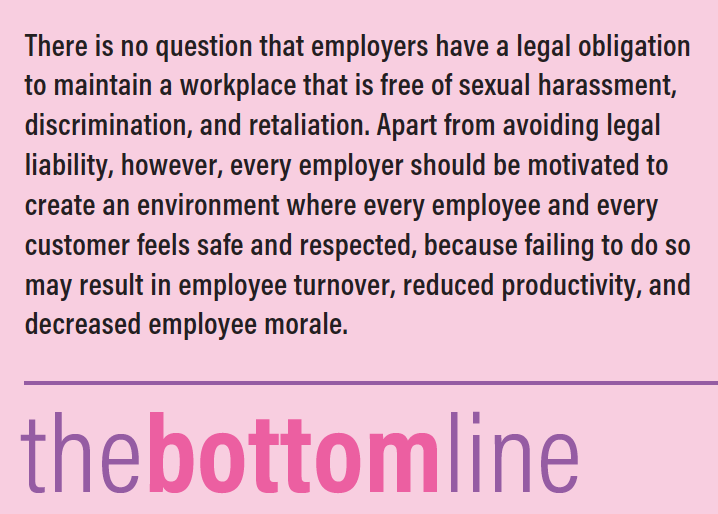 Of course, there is no question that employers have a legal obligation to maintain a workplace that is free of sexual harassment, discrimination, and retaliation. Apart from avoiding legal liability, however, every employer should be motivated to create an environment where every employee and every customer feels safe and respected, because failing to do so may result in employee turnover, reduced productivity, and decreased employee morale.

What can employers do to ensure that they are following the law and fostering a workplace free of discrimination or harassment?

1. Make Sure You Have Clear, Established Rules: Review Your Policies and Procedures

All employers should take the time to review their policies and procedures to ensure that they: a) have created workplace policies that bar harassment or discrimination of any kind; b) offer flexible reporting procedures in the unfortunate event that an employee believes that she or he has been harassed or discriminated against; c) have a plan in place for the practice’s leadership to conduct legally compliant investigations of harassment claims; d) have policies that make it clear that employees will not be and should not be retaliated against for reporting issues of harassment and discrimination to the practice’s leadership; and e) have considered and, where appropriate, implemented policies that address maternity leave, lactation breaks, and reduced work schedules.

Also, keeping in mind that pay inequality is another invidious form of gender discrimination, employers should ensure that their policies and procedures with respect to employee compensation are fair across gender lines.

Based on guidance from the Equal Employment Opportunity Commission (the Federal Commission charged with investigating employees complaints of harassment and discrimination), an anti-harassment policy and complaint procedure should contain, at a minimum, the following elements:

Implementing and following policies designed to prevent and respond to complaints of sexual harassment and discrimination, whether they come from employees or third parties, is the first and most basic step toward gender equality in the workplace.

To be frank, policies are not terribly useful unless your employees are aware that they exist and understand what they say! Employers should be proactive in ensuring their employees know what the employer’s expectations are. Each new employee should be trained on the employer’s anti-discrimination and anti-harassment policies during the on-boarding process. Current employees should undergo ongoing training as policies change or, simply, to refresh their understanding of the policies.

From the onset of employment it should be made clear to every employee that sexual harassment is unacceptable in the workplace and that engaging in such behaviour will lead to termination. Each employee should acknowledge in writing that he or she has reviewed and understands the sexual harassment policy and anti-discrimination policies. It is imperative to stress that all employees exercise good judgment to avoid engaging in conduct that may be perceived as harassment.

A policy that is not implemented through communication, education, training, and consistent enforcement is ineffective. Each manager and supervisor must be able to identify behavior that violates company policy and reinforce that sexual harassment and discrimination will not be tolerated. Additionally, every job description for managers and supervisors should include requirements regarding knowledge and proper enforcement of the anti-harassment and anti-discrimination policies and procedures. Employers should also remember that nonemployees, such as customers, vendors, and guests, could also create a hostile work environment for employees.

3. Make Sure You’re Considering the Whole Picture: Focus on the Culture, Not Just Compliance

The conversation around providing a safe and appropriate workplace cannot simply revolve around policies and training. An employer’s adherence to its stated anti-harassment and anti-discrimination policies is only as good as its leadership’s treatment of and attention to those issues. Sexual harassment is, in part, a workplace culture problem and a leadership problem.

During a recent panel of California State Senate and Assembly lawmakers, University of Southern California expert on organizational behavior Janet Denhardt commented, “You can change all of the formal procedures, you can change the structure. That won’t change anything until you change the underlying culture as well.”

Every employer should create a workplace environment where employees are comfortable to and encouraged to report violations of their employer’s policies and procedures without the fear of retaliation. In fact, employees filing claims alleging sexual harassment often include a claim for retaliation and allege that, when they complained of illegal conduct, they suffered negative consequences. Providing an open and respectful workplace culture that allows for employees to safely come forward to report issues will foster a positive work environment.

From the top down, employers must all take responsibility for our workplace cultures and, “If you see something, say something.” With the statistically high percentage of sexual harassment victims being female, to truly transform the workplace, men who find themselves in rooms with other men must call out and halt the “locker room talk” that demeans and devalues women and trends towards sexual violence. These holdover habits should garner a swift rebuke. While creating pipelines to power that move more women into male-only and male-dominated workplaces, employers should reject the notion that a woman’s presence is required to prohibit and police bad adult behavior.

Instead, employers should aim higher to create more civilized workplaces. As an antidote to sexual harassment and other toxic work cultures, leaders should consider Stanford University professor Robert I. Sutton’s The No Asshole Rule: Building a Civilized Workplace and Surviving One that Isn’t. Sutton’s best-selling book fits squarely in the movement to halt sexual harassment in the workplace. Sutton is not addressing his rule to the person having a bad day or someone with a sour demeanor but, instead, defines a “certified-asshole” as someone with “a persistent pattern” or “history of episodes” that result with “one ‘target’ after another feeling belittled, put down, humiliated, disrespected, oppressed, de-energized, and generally worse about themselves.”

One cannot miss that a sexual harasser’s conduct falls squarely within Sutton’s definition, as a specific and identifiable subset of the broader problem. According to Sutton, “if someone consistently takes actions that leave a trail of victims in their wake, they deserve to be branded” and removed.

According to Sutton, organizations should immediately ban their resident jerks from the hiring process and purge them as employees. Once identified, Sutton explains that effective management should fuel “a virtuous, self-reinforcing cycle between ‘big’ things that organizations do—the stated philosophies; the written policies; the training; and official hiring, firing, and reward practices—and the smaller ways in which people actually treat each other.”

Establishing a culture of openness, intervention, and accountability is crucial to eliminating sexual harassment in the workplace. Organizations instituting Sutton’s Rule will not only elevate their workplace culture and begin to cull their ranks of those but will also guard against potential sexual harassment activity by sweeping up and sweeping out the sexual harassers in the bunch.

Remember that there is not a one-size-fits-all solution to these issues. The issues facing women in the workplace have been around longer than they should have been and won’t be fixed overnight. Take a proactive, positive approach to closing the gender gap in your workplace. Establish mentor programs and make it a point to mentor a junior female colleague. Seek out networking groups or organizations with a specific focus on female employees or with specific opportunities for female employees. Recruit from schools (or competitors) with large pools of talented female students or employees. Review your approach to compensation and ensure that your approach to pay is equitable across gender lines. And don’t be afraid to be creative in designing proactive plans for recruitment and retention!

5. Make Sure You Plan for the Worst: If Things Go Wrong, Investigate and Document Complaints

Companies should properly document employee complaints of harassment or discrimination and fully investigate those claims. It is essential to set up procedures for a swift, robust, and impartial investigation.

Upon receipt of a complaint, a fact-finding investigation should be initiated immediately. An employer may need to take intermediate measures before completing an investigation to ensure that further harassment does not occur. Examples of such measures are making scheduling changes to avoid contact between the parties, transferring the alleged harasser to a different location, or placing the alleged harasser on non-disciplinary leave with pay pending the conclusion of the investigation. The individual making the complaint should not be involuntarily transferred or otherwise burdened, as it could constitute unlawful retaliation. It is also important to keep the complainant apprised of the status of the investigation so he or she can contact an appropriate member of management at any time.

If the complaint is substantiated, employers should take immediate disciplinary action, up to and including termination, depending upon the severity of the issue.

Conducting fair and thorough investigations will help to ensure that your employees will have faith that their allegations will be taken seriously and will demonstrate to potential harassers that such conduct will not be tolerated.

Michael R. Galey, Esq. is a partner at Fisher & Phillips LLP in their Philadelphia office. He concentrates his practice on defending employers against employment-related claims and advising clients on personnel management and statutory compliance issues. mgaley@fisherphillips.com

The Gender Gap in Dermatology: Where Are We Now? 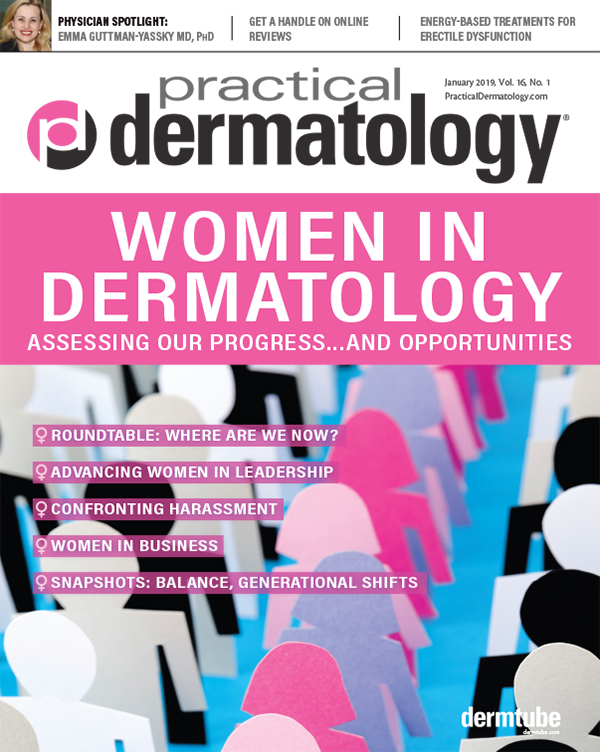