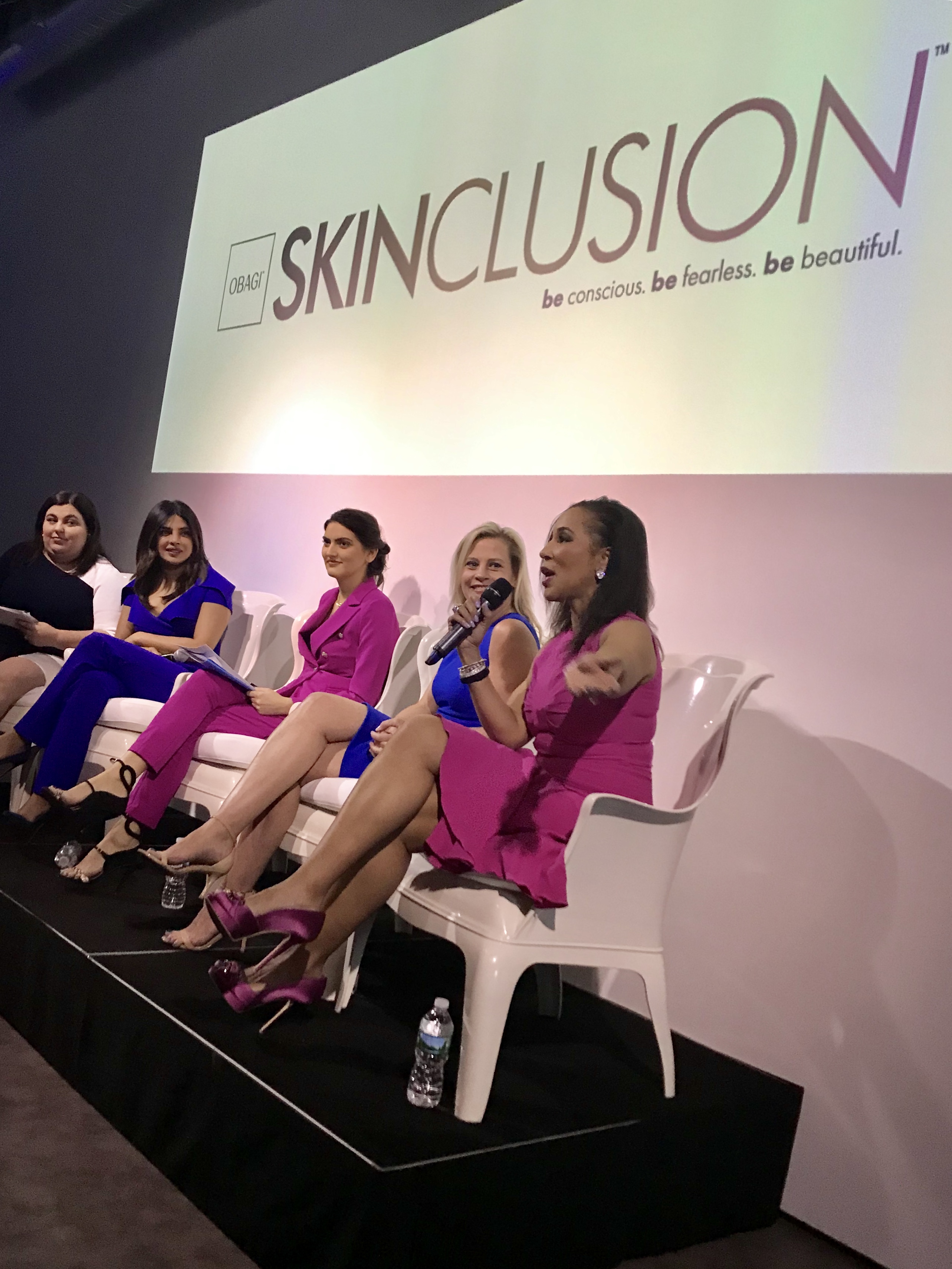 Obagi kicked off its SKINCLUSION initiative, designed to elevate the global dialogue about diversity and how we can all make conscious choices to see the beauty in all of our differences, with an event in New York City introducing Priyanka Chopra Jonas as its SKINCLUSION ambassador. Priyanka, an actor, producer, and activist, has been dedicated to fighting for inclusion and diversity over the course of her 20-year career. “

The Obagi® SKINCLUSION initiative is very close to my heart because it aligns with my values and personal experience,” says Priyanka. “The initiative supports the idea that we should be more conscious about everything we do, including how we address the automatic assumptions we make about others based on their skin tone. We all have unconscious bias, and it’s up to all of us to recognize it and be the change we want to see in the world.”

Obagi President Jaime Castle says the company developed this initiative to focus on the need for people around the world to be fully inclusive and to help people recognize their own unconscious biases, especially surrounding skin tone. Unconscious biases are attitudes and stereotypes that are largely unintentional, automatic and outside of our awareness. At the launch event, she introduced a panel of female leaders who have pledged their careers to diversity inclusion, including Priyanka; Josipa Palac, International Cultural Diversity Organization’s (ICDO) President and CEO; Elizabeth L. Haines, PhD, a research scientist for Project Implicit and a professor and director of the Social Cognition Lab at William Paterson University; and Jeanine Downie, MD, director of Image Dermatology P.C. in Montclair, NJ.

“Obagi’s SKINCLUSION initiative represents our commitment as leaders in the skincare space to elevate the global dialogue about diversity and inclusion, and spark actions that are more inclusive and reflective of all of our beautiful differences,” says Ms. Castle, who is also a member of the CEO Action for Diversity & Inclusion, the largest CEO-driven business commitment to advance diversity and inclusion within the workplace. “We’re proud of Obagi’s 30-year legacy of providing effective, science-based skin care products for all skin tones and that we were the first professional skincare company to specifically design clinical research protocols to include all six Fitzpatrick skin types. We’re also so proud to partner with Priyanka, who has brought an amazing level of passion and integrity to this initiative, and to support the significant work being done by the International Cultural Diversity Organization and Project Implicit.”

ICDO is a Vienna-based global nonprofit dedicated to promoting peace, humanity, diversity and interculturality. Its mission is to raise awareness of contemporary societal issues and of the positive influence of cultural diversity. ICDO challenges cultural misperceptions to ensure equal participation of every individual or group within society. By bringing attention to different cultural expressions and their values, ICDO encourages cultural interaction and connects people by closing cultural gaps. To fulfill its mission, ICDO organizes international events, workshops, research, and social, cultural and development projects. It gathers academic, professional, local and international voices in a mutual dialogue to safeguard diversity and to enhance society through action.

“The ICDO is delighted and grateful to be part of the Obagi SKINCLUSION initiative,” says Ms. Palac. “Obagi’s commitment to diversity and inclusion aligns with our mission to promote the idea that diversity makes society stronger in every aspect. Through everyone’s participation in the initiative and Obagi’s generous support, ICDO will continue to host new and innovative programs around the world that celebrate our multicultural differences and promote a true understanding of humanity.”

Project Implicit is a virtual laboratory and research organization developed by behavioral scientists to provide education about implicit bias through Implicit Association Tests (IATs). The tests focus on 11 different areas, including skin tone, gender, race and sexual orientation; are free to take; and can be completed in under 10 minutes. The IAT is designed to reveal our biases toward various social groups. Individual results are private and become part of ongoing collective research results. Project Implicit is made up of a team of scientists whose research found new ways of understanding attitudes, stereotypes and other hidden biases that influence people’s perception, judgement and behavior. Since its founding in 1998, more than 22 million people have taken the IATs and 28 peer-reviewed research articles have been published on their findings, including the January 2019 publication in Psychological Science that highlights strides made in skin tone implicit bias.

“We are delighted Obagi is supporting the work we do at Project Implicit,” says Elizabeth L. Haines, PhD, a research scientist for Project Implicit and a professor and director of the Social Cognition Lab at William Paterson University. “Implicit bias refers to a bias that is mostly unintentional, automatic and outside of our awareness. It’s unique to every individual and influenced by our background, cultural environment and personal experiences. Oftentimes, it can be at odds with our own perceptions of ourselves and our conscious values and standards, and it plays a role in our everyday lives—from our interactions at work, to those with friends and acquaintances and even at the doctor’s office. Recognizing this bias in ourselves and how it impacts us can be a step to making changes that can make a positive difference.”

Obagi has pioneered many skin care advances, including being the first medical skin care brand to design its clinical research protocols to cover all six skin types across the Fitzpatrick skin spectrum. Obagi believes that protecting and nourishing skin depends on developing a skin care regimen with a provider, and choosing products that are highly effective, clinically proven and right for an individual’s specific skin type, age and skin care needs.

“I am delighted to see that Obagi is putting its commitment to diversity and inclusion front and center,” says Dr. Downie. “The reality is that not all skin tones are the same when it comes to determining what kinds of products and treatments are effective. The fact that the team at Obagi has ensured their clinical trials are designed to include skin types across the entire Fitzpatrick skin spectrum is significant and should be the way forward for the entire skincare industry.” She encourages all skincare companies to do research on skin types I-VI, to have an ethnically diverse staff, and to include all ethnicities in their marketing campaigns.

As part of the SKINCLUSION initiative, Obagi is supporting these groups who work to expand diversity and inclusion efforts around the world, including the work being done by the ICDO and Project Implicit.

The SKINCLUSION initiative encourages people to:

1. Visit SKINCLUSION.com to view resources from the ICDO and Project Implicit, and take the Skin Tone Implicit Association Test

4. Follow Obagi social media channels to participate in social challenges led by Priyanka and Obagi throughout the year, including a chance to meet Priyanka at a special SKINCLUSION event

For every social action taken using #SKINCLUSION, Obagi will donate $1 to support the ICDO and Project Implicit, with a total donation of $150,000.