The non-invasive fat reduction category is growing rapidly, and savvy doctors are coming up with innovative ways to use these technologies alone and with skin tigthening and anti-cellulite devices to produce results that take patients “this much” closer to what was once only achievable with surgery.

Some body-slimming devices heat or chill localized fat pockets, while others tap into radiofrequency or ultrasound energy to kill fat cells. There’s also a first-in-class lipodissolving shot (Allergan’s Kybella®) that takes aim at submental fat. The protocols and specific approvals vary, with some treatments promising results after just one session, and some requiring a series. In general, most promise about a 20 percent improvement when used as monotherapy. (See Chart)

Today’s aesthetic patients are increasingly interested in these procedures. There were 26.3 million page views for non-surgical fat reduction content on RealSelf in 2015, making it the sixth most-visited category on the site. Non-surgical fat reduction was No. 2 for all minimally invasive treatment groups (just behind fillers).  Zeltiq®’s CoolSculpting was the fourth most visited minimally invasive topic in 2015, and there was a 40 percent spike in searches for Kybella® in the last quarter of 2015 compared to the third quarter. (Kybella® was approved in Q2 2015.)

The first rule of thumb is to choose the right patient for non-invasive fat reduction, says San Francisco dermatologist Vic A Narurkar, MD, FAAD, director and founder of the Bay Area Laser Institute. Dr. Narurkar recently chaired a session on body contouring at the 2015 American Society for Dermatologic Surgery meeting. “The appropriate patient is in relatively good shape with a reasonable BMI and discreet areas of fat that diet and exercise can’t treat,” he says. 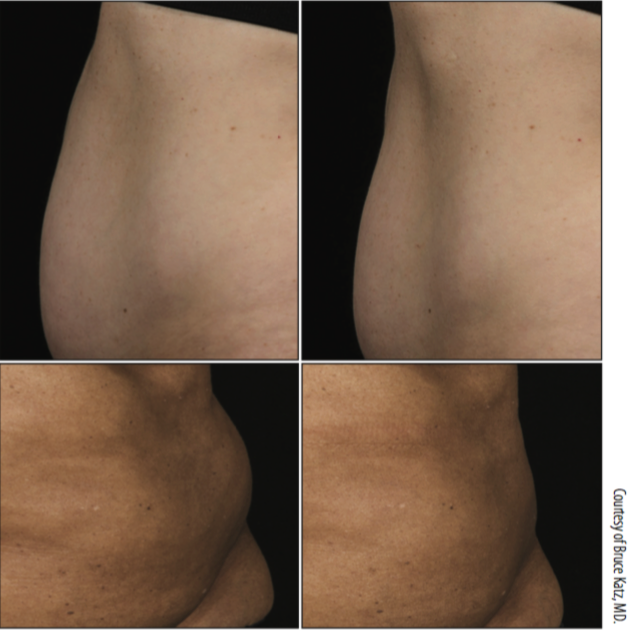 Patients before and after treatment of abdomen and flanks with SculpSure.

Beverly Hills, CA dermatologic surgeon Jason Emer, MD, agrees. “If you don’t need or want surgery, we now have a multitude of things to offer that can help you achieve the ultimate look when used along with diet and exercise,” he says.

Not every modality is right for every patient—even if they fit the overall profile, Dr. Emer says.

For example, he says, “with Syneron-Candela’s Ultrashape®, we can treat any problem area whether large or small, but CoolSculpting requires that you have enough fat to get into the applicator.”

“In the right patient, the question now becomes ‘do you want something with little downtime that takes a few months or are you an instant-gratification person?,” he says. “Some people are happy with 20 percent reduction, while others want that 90 percent improvement that can be seen after liposuction.” 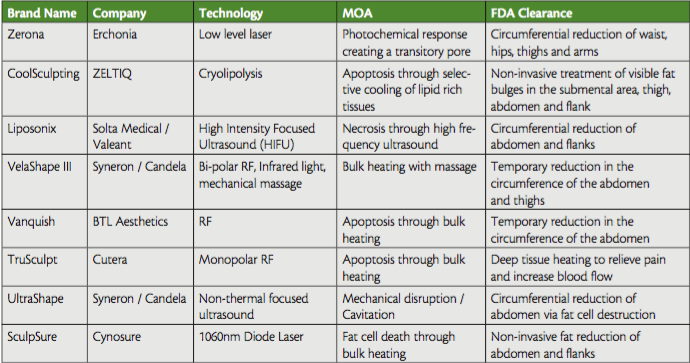 Dr. Narurkar always asks if the patient has looked into surgical modalities before discussing non-invasive options. “It is really impossible to replicate a surgical result, however, in the right candidate even just montherapy with one fat-reduction technology can get good results,” he says. 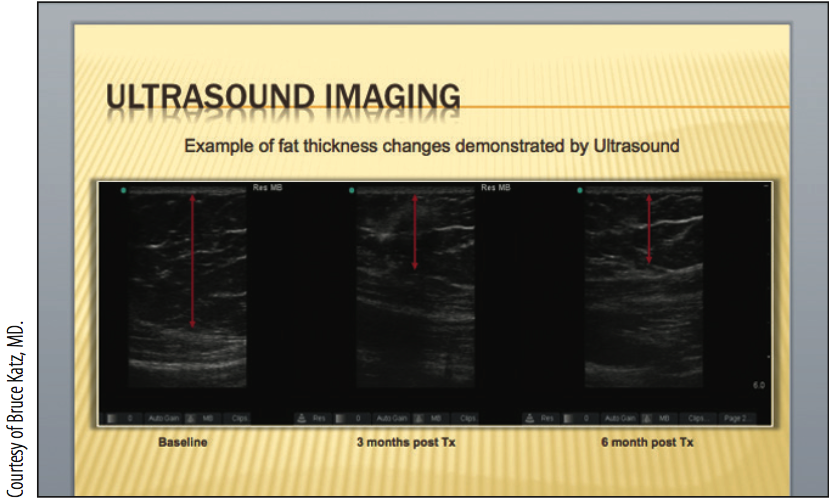 Ultrasound images before and after SculpSure.

Another selling point when discussing expectations with patients is repeatability, says New York City plastic surgeon Lawrence Bass, MD, at an event sponsored by Cynosure for Sculpsure®, the latest addition to the non-invasive fat reduction category. “Repeatability is a key thing for non-surgical body contouring because there are many things that can cause weight gain—such as a twisted ankle so you can’t exercise,” he says “You don’t want to do liposuction five times in your life, but doing SculpSure® five times is fine.”

Separating the Wheat from the Chaff

Given the multitude of non-invasive fat reduction treatments available, evidence-based medicine is the only way to separate what works from what doesn’t, Dr. Narurkar says. “There are all heavily marketed but until we have the treatments, we don’t know what the clinical outcomes will be,” he says.

Hi-definition contouring showing the use of hi def ultrasonic and water liposuction with radiofrequency skin tightening in combi- nation (3 months).

Zeltiq®’s Coolsculpting was among the first out of the gate, and the studies leading up to its 2009 FDA approval really show us how it should be done, Dr. Narurkar says. “This should be the standard of care for any device that makes a claim for a special indication,” he says. “There were MRI and laboratory studies to see what happens to fat,” he says. In addition, there is now a standardized protocol, with more than two million cycles performed with Coolsculpting worldwide that has optimized treatments. Coolsculpting also has the largest number of FDA clearances including the abdomen, flanks, thighs, and submental area.

There are more options today than ever before and this will ultimately boost patient satisfaction. “We can compare CoolMini to Kybella to see which produces the most significant effects in the submental area,” Dr. Narurkar says.

Evidence-based study is the way forward, says Bruce E. Katz, MD, Clinical Professor of Dermatology, The Mount Sinai School of Medicine and Director, Cosmetic Surgery & Laser Clinic, Mount Sinai Medical Center Director, Juva Skin & Laser Center in New York in New York City. “Anyone who is investing money in these devices should be looking at evidence-based studies before buying,” he says. “Circumferential measurements of the thigh or abdomen can be inaccurate, but MRI and ultrasound studies can provide objective measure of changes in fat layers.” Dr. Katz conducted such studies for Cynosure’s SculpSure®.

Some devices are ‘set it and forget it’ while other treatments can be more hands-on for the provider, all of which, along with objective data, may factor into the path to purchase.

When One Plus One Equals Three

“The next wave of studies will be to see how energy devices work in combination and then when patients come in and say ‘I want to look better in a swim suit,’ we can offer a validated approach in an algorithm to help them achieve these goals,” Dr. Narurkar says.

“Combining these technologies will be the wave of the future and get us closer to a fine contouring,” adds Dr. Emer.

For example, Dr. Emer combines Ultrashape® with Velashape® or Venus Legacy® for skin tightening and fat reduction. One such protocol involves three treatments at once: Velashape®, Ultrashape®, and Velashape®. The VelaShape® treatment irritates the fat cells, making them more vulnerable to the Ultrashape®. “Instead of 20 percent to 30 percent improvement, we get 30 percent to 40 percent when we add Velashape® to Ultrashape®,” he explains. Dr. Emer also uses energy-based devices following liposuction for extra contour.

Before (left) and 8 weeks after first CoolMini treatment (right).

“The new and exciting part of Coolsculpting is that the treatment times are now cut in half with new conformable applicators,” says Dr. Stevens. He is conducting studies using the CoolminiTM submental applicator to freeze fat above the knees and under the bra line. The results have not been published yet, but so far, “it looks fabulous.” Dr. Stevens is also conducting trials using Coolsculpting to treat the anterior thigh and ‘c’ankle. In sum, we can expect “shorter times, more applicators and treatment for every body part with CoolSculpting.”

“If you reduce fat, the cellulite looks worse. I combine a fat-reduction device with a skin tightening and anti-cellulite device such as Venus Legacy®, ZWave, or Cellfina™ and now you have the potential for a surgical improvement,” he says. “The trend is not just a single-set device, but an individualized treatment plan that can incorporate fat reduction, skin tightening and cellulite treatment for optimal correction,” he says. “If you want a body shift, its not one treatment. It’s a couple of treatments to multiple areas.”

When discussing treatment plans with potential patients, Dr. Emer doesn’t take an ala carte approach. “I put together a plan that includes all of the areas they want to address and say ‘this is the cost for the optimal outcome,” he says.

Other doctors are also combining non-invasive treatments to kick results up a notch. “We might add something like ThermiRF™ or Alma’s vShape for skin tightening among people who have skin laxity after fat removal,” Dr. Katz says.

“Down the line, I can see fire an ice treatments where heat and is cold are used sequentially for fat reduction,” says Marina Del Rey, CA-based plastic surgeon Grant Stevens, MD.

By and large, today’s non-invasive fat reduction technologies deliver on their promise and in coming years, there will be even more options for patients who don’t want or can’t undergo surgery, Dr. Narurkar predicts. n

Skin of Color: Cosmetic Procedures on the Rise 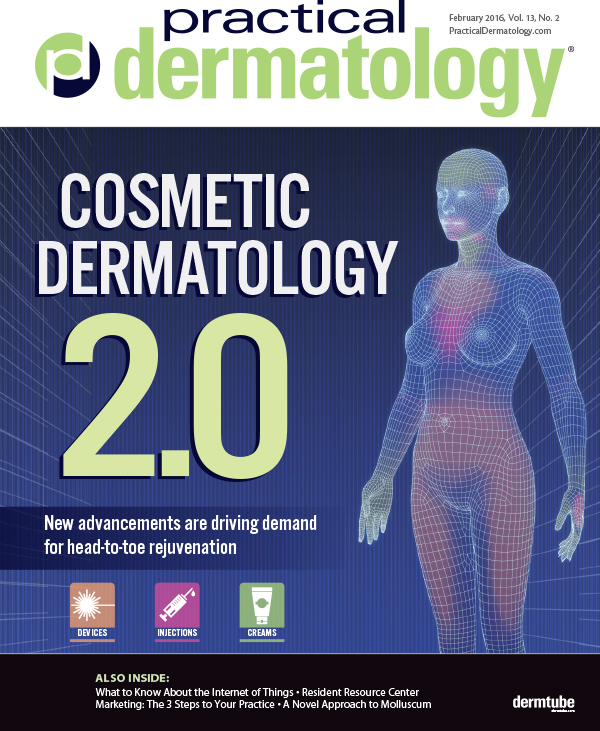