The “Aged Microenvironment”: New Understandings of Melanoma Spread and Aggression

New research sheds light on pathways through which melanoma may become more aggressive.

Cancers are more common in older individuals. Although there are broad understandings of this phenomenon, it is known that specific pathways of metastasis and spread vary based on tumor type. There have been numerous attempts to elucidate these pathways. Now findings from recent investigations may help to explain why melanomas may be more common and perhaps more aggressive in older patients. They may also explain non-response to certain therapeutics. The findings suggest that there are both structural and biochemical changes in older skin that may converge to promote the proliferation of melanoma. The aged microenvironment is crucial to the process.

DAILY SPF USE LINKED TO REVERSAL OF PHOTOAGING SIGNS

Could daily SPF use actually reverse the signs of skin aging? “We know that sunscreen is the most effective and scientifically proven agent to prevent signs of early aging,” says Steven Wang, MD. “The good news is for the first time we show that someone using a moisturizer with sunscreen in the morning without any anti-aging product can actually prevent as well as reverse some of the signs of early aging.”

It’s unclear what accounts for the improvement in the appearance of the skin. One possibility is that some benefit may derive from the prevention of new damage, and providing an opportunity for the skin’s natural repair processes to proceed. “Especially with hyperpigmentation, a lot of times when you just prevent the ongoing damage, the body may have some sort of way clearing it and making the skin lighter,” Dr. Wang notes.

Dr. Wang sees in the results an opportunity to encourage compliance with daily sunscreen use. “The major motivation as a skin cancer specialist is that I want my patients to process and reduce skin cancer,” he says. But, he suggests, dermatologists could use “the aesthetic approach, beauty approach, and encourage them to use sunscreen that can reverse the signs of aging. And that will, I think, enhance compliance much, much better…We can say sunscreen actually helps you prevent skin aging. I think that element right there will provide strong motivation for people.” —Practical Dermatology® staff

In a recent article for The New England Journal of Medicine (August 18, 2016), Claudia Wellbrock, PhD offers an explanation of recent research.1 Specifically, she addresses a study by Kaur, et al., which suggests that fibroblasts in the aged microenvironment play a key role in driving tumor development.2

Kaur and colleagues investigated the behaviors of melanoma cells in models of old and young human and mouse skin. Melanomas in older mice grew more slowly than those in younger mice but were more aggressive. Researchers observed that aged fibroblasts secrete the Wnt antagonist, sFRP2. The Wnt signaling pathways are a group of signal transduction pathways made of proteins that pass signals into a cell through cell surface receptors. When they administered sFRP2 to young mice with melanoma, they observed increased angiogenesis and lung metastasis.

Researchers believe that sFRP2 induces a decrease in β-catenin and MITF, leading to the loss of a key redox effector, APE1. Without APE1, melanoma cells are less able to self-repair following oxidative stress. Previous research cited by Kaur, et al, associate resistance to BRAF inhibition with accumulated ROS damage and decreases in both β-catenin and MITF. It would appear therefore, that older fibroblasts secreting high amount of FRP2 leads to higher levels of oxidative damage, angiogenesis and metastatic ability. This may also influence the response of melanoma to treatment with vemurafenib with age.

Kaur’s team decided to look at age as a function of response to BRAF-inhibiting therapy. They looked for age-related trends in response to vemurafenib in human trials (n=79, RECIST). Using age categories of under 35 and over 55, these investigators saw a shift from a 41% (mean) response in young patients to 25% (mean) response in patients over 55. Numbers of young patients were too low to achieve statistical significance. Efforts on identifying an age cutoff where a statistically significant difference could be observed revealed a striking separation (p=0.016) between patients under 65 years-old and over 65 year-old (~25.6% reduction in tumor burden in aged compared to ~47% in the young).

Another recent investigation looked at melanoma metastasis and the role of aged fibroblasts. For their study in Nature Cell Biology, researchers undertook histological evaluations of melanoma samples and compared them to normal skin.3 Whereas normal skin was characterized by melanocytes in the basal layer of the epidermis and few fibroblasts in the dermal layer, in primary melanoma fibroblasts accumulated in the dermis. As cancer progressed, the team noted that fibroblasts surrounded melanoma cells and filled the dermis.

Through a series of investigations, the researchers identified several probable steps in the communication process that allows melanoma cells to proliferate and invade. This communication was not shown to be largely dependent on alpha-SMA expression, a protein felt to be required for fibroblast contractile activity. However, there was a four-fold decrease in miR-21 in normal skin dermis compared to melanoma in situ. MicroRNAs (miRNAs) have been discovered as naturally occuring non-coding RNAs, controlling gene expression. Increasing numbers of reports implicate an aberrant expression of certain miRNAs, in particular miR-21, in tumor growth, carcinogenesis, and response to chemotherapy in different malignancies. Melanosomes apparently transmit exosomes that contain miRNAs, and proteins that support tumor growth.

Metastatic and aggressive melanomas are associated with worse prognosis for patient. To some extent, therapeutic development has been hindered by an incomplete understanding of the mechanisms of metastasis, especially the early stages of dermal invasion and spread. Additionally, while the emergence of BRAF-inhibiting therapy has offered some promise in the management of advanced melanoma, non-response has been a puzzling and frustrating issue.

The current findings provide evidence that treatment could be developed to target the pathways of melanoma metastasis and invasion. If clinicians could interfere with melanosome/fibroblast communication, dermal invasion could theoretically be halted, and the tumor’s ability to spread would be effectively cut off.

In the case of resistance to BRAF therapy in older patients, the latest findings help elucidate the mechanisms of non-response. Kaur, et al note that small studies have suggested that antioxidant therapy may be beneficial in the treatment of BRAF-mutant melanoma and suggest that this may be especially relevant for elderly individuals.

Further research is needed to ascertain what existing interventions may be optimized in older patients. Hopefully new findings will continue to point the way to new, effective therapies. n

A History of Phlebology – Warts and All, Part 2 of 3

Getting to Know Juvéderm Volbella XC 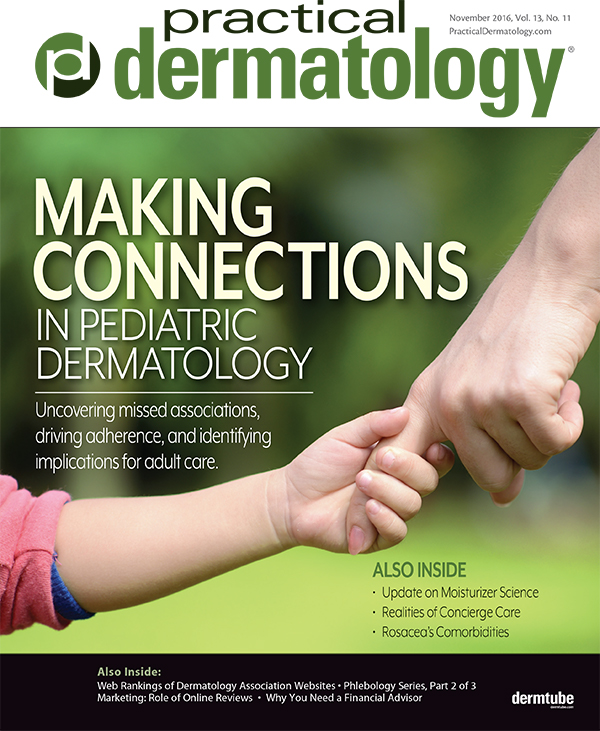