Harnessing the power of nanotechnology to treat infections.

Adam Friedman, MD, FAAD, is an associate professor of dermatology in the department of dermatology at George Washington School of Medicine and Health Sciences in Washington, DC where he also serves as the Residency Program Director and the Director of Translational Research.  He is currently investigating novel nanotechnologies that allow for controlled and sustained delivery of a wide spectrum of physiologically and medicinally relevant molecules with an emphasis on treating infectious diseases.

How is nanotechnology changing the practice of dermatology?

Dr. Friedman: Nanotechnology, the study, manipulation and development of materials at the billionth of a meter scale, confers numerous benefits to the practice of dermatology, but let’s stick with some very basic ones.

First, at the nanoscale, topically applied ingredients can be made invisible (as they do not scatter visible light) and suspended in cosmetically elegant vehicles which could not have been possible at the macroscale, making them more consumer-compliance friendly. Nanoscaled delivery vehicles, due to their size, can sit and remain on the skin more evenly and for longer periods of time, creating 1) an occlusive film, and by definition, decreasing transepidermal waterloss (always a win); and 2) a depot effect, allowing for sustained release of active ingredients over time or/and improving penetration through the stratum corneum. A topical agent is only as good as its ability to get where it needs to be. We have already witnessed the impact of nanomaterials in the consumer space with more effective and consumer-friendly sunscreens and anti-aging ingredients which are more stable and penetrate the barrier better to reach their biological targets.

What are some of the more exciting nanotechnology applications?

Dr. Friedman: I think some of the most exciting applications are utilizing nanotechnology to deliver undeliverables, so to speak. Active agents that either don’t have good bioavailability or solubility, like the potent anti-inflammatory, anti-infective, and anti neoplastic polyphenol Curcumin, or stability/survivability, like small interfering RNA that can purposefully silence genes to exert a wide range of impacts from shrinking tumors to accelerating wound healing. Even more importantly, nanomaterials can be purposefully designed to carry out incredible chemical reactions such as generating nitric oxide (NO) from it’s precursor sodium nitrite through a novel pathway facilitated by the structure of the nanomaterial itself.

That’s the beauty of nanotechnology—you can pick and choose your ingredients to design a unique material with the clinical target in mind. This can include a nanoparticle that only releases its contents when exposed to a certain pH; nanospheres that aggregrate to form a macrostructure in response to a change in sheer stress; and nanocrystals that respond to external magnetic forces, but don’t themselves exert a magnetic field, to be guided to any location in the body. The sky’s the limit.

Why would nanotechnology by more effective at  treating infected wounds?

Dr. Friedman: Would you rather use a tiny dart to hit a massive target or vice versa? Bacterium and fungi are huge at the nanoscale. The likelihood of your nanoscaled anti-infective hitting its mark is much greater then its bulk counterpart. Furthermore, as you shrink the size of a material, its surface area to volume ratio exponentially increases, meaning you have a super reactive surface, once again increasing the likelihood that your bug buster nanoparticle will reach its target and interact with it.

There are multiple studies, even some of my own, showing nanoparticles literally lining up along the cell wall or membrane of these pathogens on electron microscopy, ultimately resulting in their death. Nanomaterials delivering antibiotics/fungals or antimicrobial agents can be designed to fuse with these external structures, creating a depot effect and allowing drug to flow through into the pathogen cells and overwhelm any potential resistance mechanisms. One could also design a nanomaterial to deliver synergistic or combo anti-infective therapies to improve efficacy and lessen the risk for antimicrobial resistance. As dermatologists we are already down with this concept as we use many combo therapies for a wide range of disease states.

Lastly, as mentioned early, nanomaterials can be used to generate or deliver highly unstable gases like NO, our own bodies’ evolutionarily conserved weapon against all microbes. NO is a triple threat: a direct cytotoxic, cytostatsic, and immunomodulatory agent, therefore providing the most powerful anti-infective impact. Only through nanotechnology can this biological marvel be translated to the bedside.

What role does nano-crystalline silver play in managing skin and soft tissue infections?

Dr. Friedman: They are two general classes of materials that at the nanoscale are inherently antimicrobial. The first are cationic metals, like silver, that when reduced to the nanoscale, can both get at pathogens much easier but also disassociate their positively charged cations much easier, which then go on to obliterate the negatively charged pathogens. There are numerous silver gels and dressings on the market because of both the established safety and efficacy of nanosilver. The best time to use nanosilver is early in wound healing, when even just colonized bacterium can prevent progression of wound healing. The other category includes organic materials like soy bean oil or chitosan (derived from chitin) and curcumin, all of which have significant data though mostly in the pre-clinical space.

Given many of their supportive safety profiles and ease of use at the nanoscale, I am hopeful we will see many of these ingredients enter the marketplace as we are in a constant state of emergency against the rising number of multi-drug resistant organisms. This threat fuels my drive to move this work forward to the marketplace. n

Get More From Dr. Friedman

Updates on Nitric Oxide As a Topical Anti-infective

Update on Diagnosis, Treatment, and Management of Onychomycosis

A History of Phlebology: Warts and All 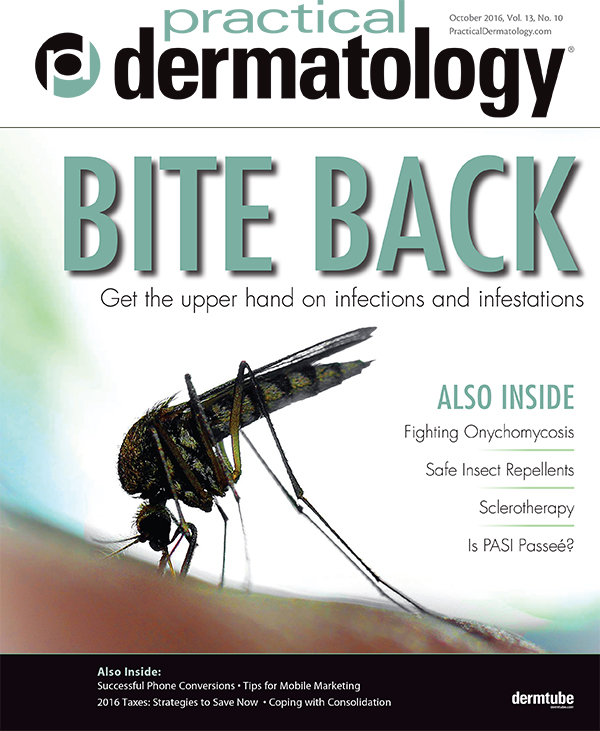