The FDA has approved Ilumya (tildrakizumab-asmn) from Sun Pharma for the treatment of adults with moderate to severe plaque psoriasis who are candidates for systemic therapy or phototherapy. Ilumya selectively binds to the p19 subunit of IL-23 and inhibits its interaction with the IL-23 receptor, leading to inhibition of the release of pro-inflammatory cytokines and chemokines. Ilumya is administered at a dose of 100mg by subcutaneous injection every 12 weeks, after the completion of initial doses at weeks 0 and 4. Ilumya is contraindicated in patients with a previous serious hypersensitivity reaction to tildrakizumab or to any of the excipients.

The FDA approval of Ilumya for the treatment of adults with moderate to severe plaque psoriasis was supported by data from the pivotal Phase 3 reSURFACE clinical development program. In the two multicenter, randomized, double-blind, placebo-controlled trials (reSURFACE 1 and reSURFACE 2), 926 adult patients were treated with Ilumya (N=616) or placebo (N=310). Results from these studies were published in The Lancet in July 2017, with primary endpoints presented at the 25th European Academy of Dermatology and Venereology (EADV) Congress.

The FDA has approved a label update that includes pharmacokinetic data showing negligible to low transfer of Cimzia (certolizumab pegol) through placenta and minimal transfer to breast milk from mother to infant. The label update is relevant, since approximately 17 percent of patients in the US with rheumatoid arthritis (RA), ankylosing spondylitis (AS), psoriatic arthritis (PsA), and Crohn's disease (CD) are women aged 18-45, according to UCB.

Limited data from the ongoing pregnancy registry on use of Cimzia in pregnant women are not sufficient to inform a risk of major birth defects or other adverse pregnancy outcomes.

UCB has been studying how biologic drugs impact women of childbearing age. Findings from two studies have strong implications for this patient population as they consider pregnancy. Based on results from the CRIB study, there is negligible to low placental transfer evident from mother to child during pregnancy. Data from CRADLE, the prospective pharmacokinetic trial measuring the presence of an anti-TNF in breast milk, found minimal transfer of Cimzia during lactation. UCB developed the CRADLE study with input from the FDA, including the agency's Division of Pediatric and Maternal Health.

Bruce H. Thiers, MD, FAAD, will be installed as president-elect in March 2019 and hold the office of president for one year beginning in March 2020. He is a distinguished university professor in the Medical University of South Carolina Department of Dermatology and Dermatologic Surgery in Charleston, SC.

Susan C. Taylor, MD, FAAD, will be installed as vice president-elect in March 2019 and hold the office of vice president for one year beginning in March 2020. She is an associate professor of dermatology at the University of Pennsylvania in Philadelphia.

Larry Green, MD, FAAD; Adelaide Hebert, MD, FAAD; Alexander Miller, MD, FAAD; and Cyndi Yag-Howard, MD, FAAD, were elected to the Academy's board of directors. They will each serve a four-year term beginning in March 2019.

The International Society of Hair Restoration Surgery (ISHRS) has updated the terminology of the hair transplantation method known as FUE from Follicular Unit Extraction to Follicular Unit Excision. The ISHRS explains that this change is driven by the need to emphasize the actual surgical aspect of the procedure, especially among patients in countries where the term “extraction” has non-surgical implications. The group says it has already received worldwide support and acceptance from hair restoration surgeons.

“The purpose of clarifying that surgical graft removal with FUE involves excisions of hair and tissue is to make this terminology more scientifically, clinically and surgically accurate,” says Ricardo Mejia, MD, ISHRS Board Member and Chair of the Ad Hoc Committee on Issues Pertaining to the Unlicensed Practice of Medicine, in a news release. “When performed by qualified, properly trained hair restoration surgeons, hair transplantation is a safe and highly effective procedure to correct hair loss. However, it is a cosmetic surgical procedure and any attempt to downplay the significant surgical aspects of FUE to appear less invasive is misleading, and potentially dangerous, to patients.”

Sonoma Pharmaceuticals, Inc. has received a new 510(k) clearance from the FDA for an antimicrobial post-therapy gel. Under the supervision of a healthcare professional, the new product is intended for the management of post-non-ablative laser therapy procedures and post-microdermabrasion therapy as well for use following superficial chemical peels. It may also be used to relieve itch and pain from minor skin irritations, lacerations, abrasions and minor burns.

Dr. Michael Gold, founder of Gold Skin Care Center, Advanced Aesthetics Medical Spa, The Laser & Rejuvenation Center, and Tennessee Clinical Research Center, all located in Nashville, TN, says, “This antimicrobial post-treatment gel is a promising new tool for all dermatologists and aesthetic clinicians who are looking to better manage medical procedures, post-procedure itch and pain associated with procedures including laser skin resurfacing, while promoting enhanced healing and protection against secondary infections. In our clinical testing to date, we have seen dramatically improved outcomes with quicker healing times and less patient discomfort when this advanced technology is added to our procedure management protocol.”

The United States Patent and Trademark Office (USPTO) issued US Patent No. 9,895,301, which is directed to methods related to the use and administration of a certain janus kinase (JAK) inhibitor for treating hair loss disorders. This newly allowed patent is owned by The Trustees of Columbia University in the City of New York and exclusively licensed to Aclaris and is the latest U.S. patent to issue in connection with Aclaris' JAK drug development program for hair loss disorders.

US Patent No. 9,895,301 covers the use of tofacitinib for inducing hair growth and for treating hair loss disorders such as alopecia areata and androgenetic alopecia (AGA), otherwise known as male/female pattern hair loss. Additional issued claims pertain to methods of using tofacitinib to treat particular phenotypes of alopecia areata, as well as to treat other hair loss disorders. The ‘301 Patent contains 67 claims and expires in November 2031.

Hydrogen peroxide topical solution 40% (Eskata, Aclaris) is less cytotoxic to living cells and less damaging to melanocytes than cryosurgery, according to a new study led by Adam Friedman, MD, associate professor of dermatology at the GW School of Medicine and Health Sciences.

“There is ongoing clinical work evaluating the safety of this solution in darker skin types,” explains Dr. Friedman in a statement. “Another important take away from this study is to also recognize how damaging even a small amount of cryotherapy, a five-second free time, can be to human skin. These findings should be considered when using for the broad array of skin diseases for which cryosurgery is warranted.”

Findings appear in the Journal of the American Academy of Dermatology.

The American College of Rheumatology's new white paper, “The Science Behind Biosimilars—Entering a New Era of Biologic Therapy,” encourages physicians to begin integrating biosimilars in patient treatment, where appropriate.

“Biosimilar integration into prescription patterns provides more options for patients—hopefully at a lower cost—and improves access to more patients who could benefit,” says lead author S. Louis Bridges Jr., MD, PhD, Anna Lois Waters Endowed Chair and director of the University of Alabama at Birmingham's Division of Clinical Immunology and Rheumatology, in a release. “Faculty members in our division are leading national discussions on biosimilars in the treatment of rheumatic diseases, and we're proud to be a part of this.”

The D.O.S.E technology is able to mix active ingredients, chosen specifically to target the appearance of skin aging issues, like wrinkles, fine lines, and discoloration, into a single serum. D.O.S.E has a production-quality compounder that operates at 1,200 rotations per minute to mix ingredients precisely, drop by drop. The machine combines active ingredients that historically were unmixable outside of a factory setting. Through this technology, skincare professionals can administer a single D.O.S.E serum with multiple active ingredients that address the appearance of multiple skin concerns. More than 250 unique skin types were considered when researching and selecting active ingredients to include in D.O.S.E in order to provide dozens of combinations through over 2,000 algorithms.

The D.O.S.E experience begins with a one-on-one skincare professional consultation to discuss which active ingredients will be most appropriate for the patient. The skincare professional completes an assessment on a tablet, which transfers the data to the D.O.S.E machine that mixes and dispenses the customized serum. A custom label is then printed for each consumer, including an expiration date and a bar code for easy reordering.

CUSTOM D.O.S.E will be available in select U.S. physician offices nationwide in summer 2018.

The skin has always been considered the largest organ in the body, but it may have some competition—the newly defined interstitium.

The Feinstein Institute for Medical Research researcher Petros Constantinos Benias, MD, and collaborators have identified that layers of the body long thought to be dense, connective tissues are actually interconnected, fluid-filled compartments, categorizing this part of the body as an organ – and it may be the body's biggest.

This discovery, published in Scientific Reports, could lead to better understanding and improved treatments for cancer and other inflammatory conditions.

For years researchers have known that more than half the fluid in the body is within cells, and approximately a seventh of the fluid is inside the heart, blood vessels, lymph nodes, and lymph vessels – the remaining fluid is “interstitial.” The interstitium, or connective tissue, up to now, has been thought mostly to exist between cells defined historically as a “third space”, but this does not account for the massive amount of fluid stored within the human body outside of the vascular system.

Occasionally the concept that there is a larger interstitial space has been generally referred to, though its anatomic or histologic features have never been described. The new study is the first to define the interstitium as an organ and as one of the largest in the body.

Alastin Adds to Board of Directors

Colorescience Adds to Board of Directors

David Olsen and Ty Stiklorius are joining Colorescience's Board of Directors.

David Olsen is the Chief Executive Officer (CEO) of Cos Bar. Ty Stiklorius is the Founder and CEO of Friends At Work, an entertainment and social-impact company that partners with leading creators, influencers and brands to elevate important voices.

Kamedis Forms US Medical Advisory Board

Revance Readies for Launch of its Botox Competitor 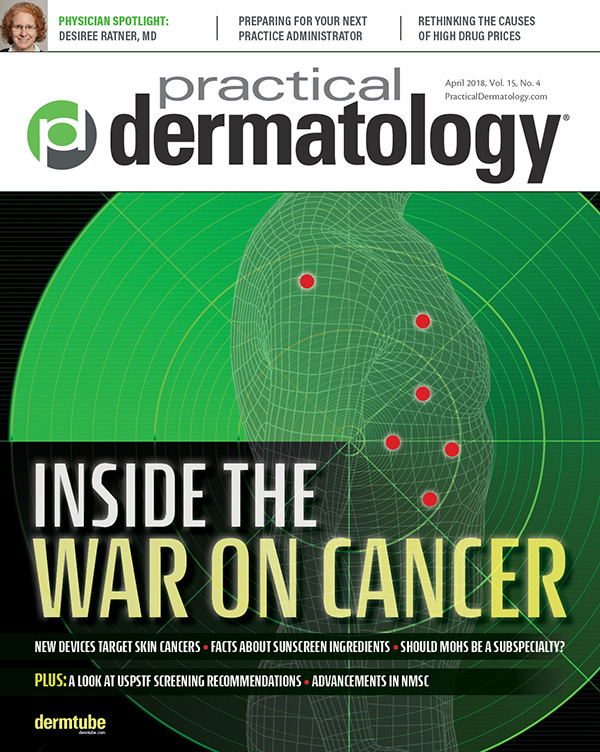