With recent FDA-clearance, microparticles are available to support Nd:YAG based treatment of inflammatory acne.

Use of energy-based devices to treat acne is a well-established practice, despite variations in reported efficacy between devices or operators. Recently FDA-cleared for use in the treatment of acne, Sebacia Microparticles are intended to enhance the outcomes of energy-based interventions for acne using the 1064nm laser. Sebacia Microparticles selectively target the sebaceous glands where they facilitate photothermal heating of the glands for the improvement of mild to moderate inflammatory acne vulgaris.

Previous energy-based approaches attempted either to kill P. acnes bacteria with blue light or to reduce inflammation and potentially increase blood flow with red light, Dr. Lain explains. “The third approach uses the heat of longer wavelength devices to kill, or at least reduce, the size of the sebaceous glands. At its most basic form, the Sebacia Microparticles act as a heat sump, so they absorb the laser energy and help to heat up, and thereby reduce the size and output of the sebaceous glands.”

The microparticles consist of a silica-coated gold core. “The microparticles are specifically tuned to be activated by laser light from a 1064nm Nd:YAG laser, which is commonly found in most dermatology practices, where it is used for hair removal and other applications,” says Ashish Bhatia, MD.

Each treatment session takes about 30 minutes, from the initial prep to the completion of laser application. There is no pain or discomfort, but redness after treatment is typical. “Post-treatment swelling is variable, but redness is universal but temporary. The redness usually lasts for less than half an hour and resolves on its own. Swelling can last a little bit longer, maybe a couple of hours,” Dr. Lain says. He notes that swelling does not persist beyond the day of treatment.

“Could someone do this over lunch and then go back to work? Absolutely. Most of the patients that we've had in the trials did exactly that or went back to school,” Dr. Lain observes. “This could be considered a lunchtime procedure.” 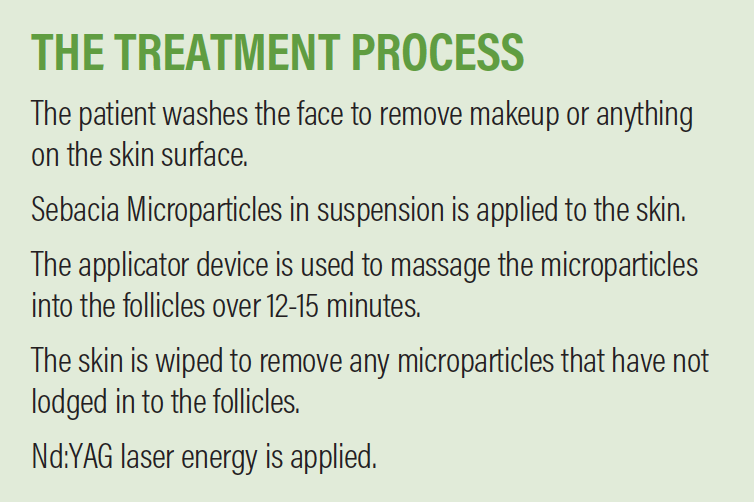 In a US randomized, controlled, blinded trial evaluating 168 patients with mild to moderate acne, Sebacia Microparticles treatment was associated with a 53 percent median reduction in inflammatory lesion count (ILC), compared to a 45 percent median reduction in ILC achieved with the laser treatment alone. Additionally, 30 percent of patients treated with Sebacia Microparticles achieved a clear or almost clear IGA score (Investigator's Global Assessment of acne severity). Reported adverse events, regardless of study treatment, were of mild to moderate intensity. There were no severe adverse events, nor were there any serious and/or unanticipated adverse events related to study treatment.

Similarly promising are results of an ongoing single-arm registry study conducted at nine practices in Europe. Dr. Bhatia presented interim data from this study at the Annual Meeting of the American Society for Dermatologic Surgery this fall. The study is evaluating the impact of a short two- to four-week skin pre-conditioning period of daily topical application of a gel containing 0.1% adapalene and 2.5% benzoyl peroxide (BPO) to help clear the pores and facilitate penetration of the Sebacia Microparticles. Patients are then administered three weekly in-office treatments using Sebacia Microparticles. 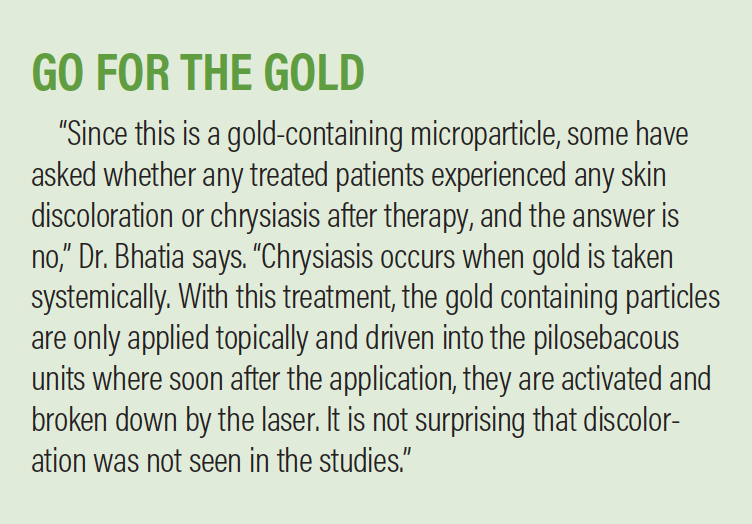 The study was designed to evaluate the extent to which subjects would use systemic therapies following a course of microparticle treatments as well as to compare outcomes for those who pretreated with BPO and retinoids to those who did not, Dr. Bhatia says.

“We learned two things,” Dr. Bhatia says. “One was that if patients did precondition with the BPO and retinoids, they had a faster response to the treatment and they had a bigger percentage reduction in their lesion counts. We know from other studies that when you precondition or when you use retinoids and BPO, it helps clear the debris out of the pores, which facilitates delivery of the gold microparticles into more of the pores.

“The second thing we learned was very interesting: For the subjects that preconditioned, the majority actually didn't end up using any systemic medicines even though they were free to do so. Ninety percent of the patients, even at six months after the treatment, were well controlled without any systemic medications, which is pretty amazing.”

The findings also suggest that patients may safely re-initiate topical acne treatment immediately after microparticle treatment, if they so desire, Dr. Bhatia notes. Patients who are already motivated to manage their acne, therefore, may continue to be active in their own care.

Dr. Bhatia says no other acne treatment has shown a similar degree of long-term improvement in acne. “This is very clinically meaningful data, which is great for the practice and the doctor. Now you're getting great results, durability of response and patient satisfaction.”

Regarding the accumulated data for Sebacia Microparticles, Dr. Lain says he is most impressed by the long-term improvement in acne. “What was surprising to me was the data that showed the continued improvement weeks to months after the laser procedures had been performed, meaning that truly there was a substantial decrease in the activity of the sebaceous glands, such that we could affect the severity of acne for at least the short to medium timeframe after the procedure.” He says he looks forward to data for an even longer timeframe. 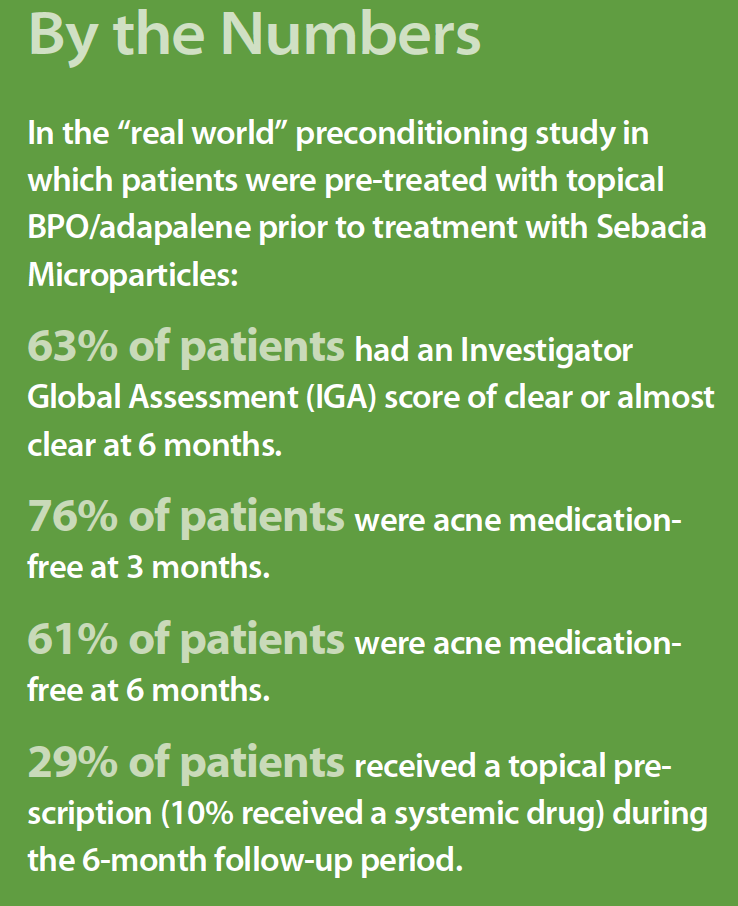 The trials included both adult and adolescent subjects, and Dr. Lain notes he is “very comfortable using Sebacia Microparticles in those age groups.” He adds that adolescents may require a bit more “coaching” about the nature of laser procedures, as the concept may not be as familiar to them.

“I think this is something that's going to be fairly easy to integrate into practices. It will drive patients to practices that offer it, since acne is a frustrating condition for many,” Dr. Bhatia says. “This really does give you a nice option to help those whith acne lesions who want durable results without medications.”

“The clinical trials focused on inflammatory acne…I would say this is best focused on those lighter skinned patients with inflammatory acne. We don't have settings yet, although I personally believe this would be safe for darker skinned patients,” Dr. Lain adds. “Certainly, Fitzpatrick skin types one through three, even a light four, should respond very well to this.”

“One of the things that I think all of us struggle with in practice is that acne is multifactorial, and regardless of what method we use to treat acne, whether it be oral or topical medications, there's always this period of waxing and waning. We often let patients know that it can take up to three months to really see consistent results from topical and oral medication,” Dr. Bhatia says. “Now when we are prescribing medications and they're expecting immediate results, we have something to give them at the same time to actively treat their acne and provide results that are rapid and sustainable.”

Pointing out that a majority of acne patients are adolescents and teens—who may run short on patience—Dr. Bhatia says Sebacia Microparticles may provide an opportunity to jump-start treatment. “A lot of times they give up on medicines. What are the most expensive kinds of medicines? The ones that they don't use! Here we're doing something to actively treat their acne that we can do in the office and they can start seeing results quickly.” 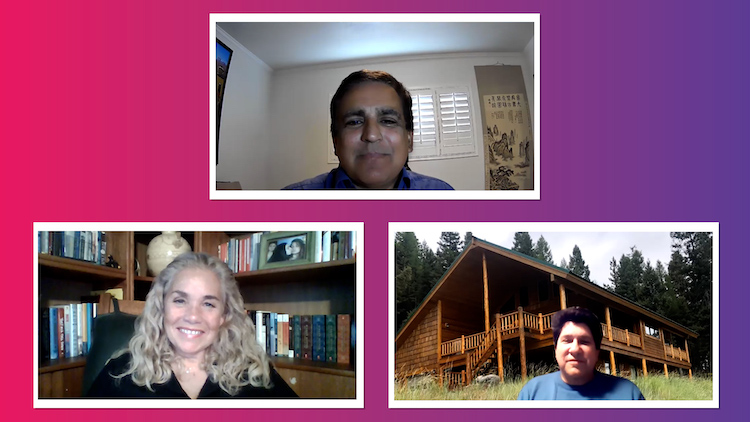