Are TNF inhibitors still the gold standard for PsA?

Over the past few years, the FDA has approved three monoclonal antibodies that inhibit the function of interleukin 17 (IL-17) for psoriasis. Two of these agents, secukinumab (Cosentyx, Novartis) and ixekizumab (Taltz, Lilly), are also approved for psoriatic arthritis (PsA).

IL-17 promotes joint inflammation by inducing the release of matrix metalloproteinases and increasing the expression of receptor nuclear kappa-B ligand, which exacerbates cartilage and bone destruction, respectively. Inhibiting the activity of the elevated levels of IL-17 with various monoclonal antibodies has been shown to be beneficial in PsA.

This article will compare the efficacy and safety of the three approved IL-17 blockers in PsA.

McInnes, et al. reported results from a double-blind, placebo-controlled study evaluating secukinumab 75mg, 150mg, 300mg, and placebo.1 Each cohort had 100 subjects. Loading doses were administered from week 0-4 and then every four weeks from week 4. A higher proportion of patients achieved an ACR20 at week 24 with secukinumab 300mg (54 percent), 150mg (51 percent), and 75mg (29 percent), compared with placebo (15 percent). In the group that was TNF-naïve, the ACR 20 was 65 percent. In the TNF failure group, the ACR 20 was 35 percent. The TNF failure group was the one cohort that responded better to 300mg, whereas secukinumab 150mg dosage was more effective overall for PsA without moderate to severe psoriasis. Adverse events noted in the secukinumab group included upper respiratory infections, nasopharyngitis, and candidiasis.

At week 52, ACR 20 and 50 went to 64 percent and 44 percent, respectively. There were no cases of Crohn’s disease and two cases of ulcerative colitis in this trial. 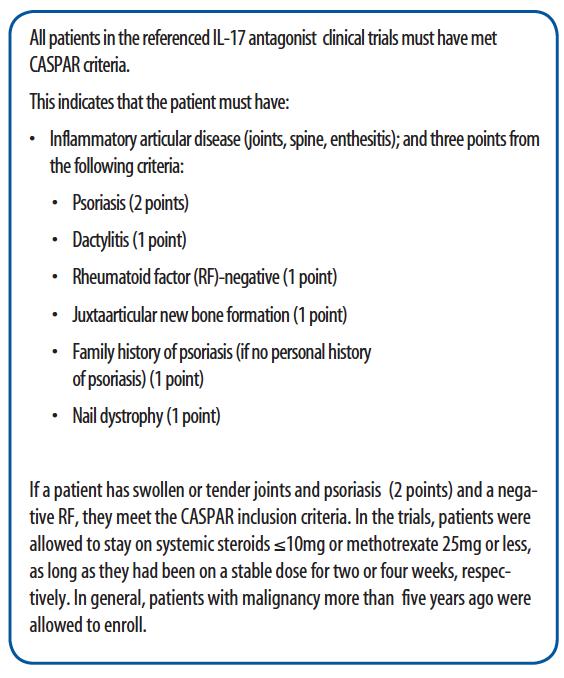 The non-human part is derived from mouse DNA. The nucleotide sequence of mouse DNA is different than that of human DNA. When incorporating mouse DNA, you can create a protein that would not be possible utilizing human DNA alone. This allows for the development of a protein, such as ixekizumab, which has a binding coefficient with 50-times greater affinity for the IL-17 ligand. In turn, this can result in higher efficacy.

The SPIRIT study by Mease, et al.3 evaluated ixekizumab at 80mg every two weeks, 80mg every four weeks, or adalimumab (Humira) 40mg every two weeks versus placebo. Both ixekizumab cohorts initiated with a 160mg loading dose at week 0. At week 24, the ACR 20 was 62 percent, 58 percent, 57 percent, and 30 percent, respectively. The modified total Sharp score, which is a measure of structural disease progression based on radiographic assessment of bone erosions and joint space narrowing in the hands and feet, was 0.08, 0.17, 0.1, 0.049, respectively.

The every-two-week dose was of equal efficacy to adalimumab.

In this 400-subject study, there were no cases of inflammatory bowel disease. There were three cases of depression and four serious adverse effects (gastroenteritis, esophageal candidiasis, cellulitis, and pneumonia) in the ixekizumab-treated cohorts.

Brodalumab (Siliq, Ortho Dermatologics) is a human monoclonal antibody to the receptor of IL-17. Brodalumab blocks the receptor that inhibits the binding of IL-17A, IL-17A/F, Il-17F, and IL-25, thereby not allowing the receptor activation to induce the synthesis of metalloprotease and nuclear K factor B (NF-κB).

In a study by Mease, et al.,4 patients with active PsA received brodalumab (140mg or 280mg subcutaneously) or placebo on day 1 and at weeks 1, 2, 4, 6, 8, and 10. At week 12, patients who had not discontinued their participation in the study were offered open-label brodalumab (280mg) every two weeks. The primary end point was ACR 20 at week 12. Brodalumab significantly improved response rates among patients with PsA. Serious adverse events had occurred in three percent of patients in the brodalumab groups and in two percent of those in the placebo group. ACR 20 was 37 percent, 39 percent, and 18 percent in the 140mg, 280mg groups and placebo at week 12, respectively. ACR 50 was 14 percent, 14 percent, and four percent. An enhanced effect was noted at week 24 with an ACR 20 of 51 percent and 64 percent in the 140mg and 280mg groups, respectively.

For 15 Years TNF-inhibitors were the gold standard therapy for PsA. Their efficacy and safety are well known. Millions of patients have been treated with these agents, and there have been no new safety signals. In the age of newer and more efficacious psoriatic therapies, however, there appears to be an opening for a new class of biologics with comparable efficacy for PsA and better efficacy for psoriasis. Depending on the patient’s past medical history and/or family history, IL-17 antagonists seem promising in the treatment of PsA. 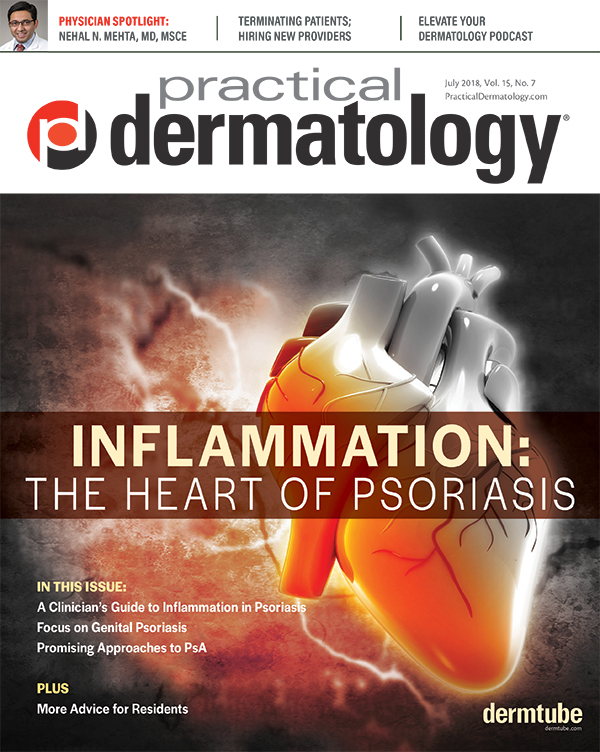 Inflammation: The Heart of Psoriasis