Digital Innovation to the Rescue: The Future of Electronic Prior Authorization in Dermatology

GR is a 45-year-old man who has been suffering from psoriasis for the past five years. It has negatively affected his self-image to the point that he rarely goes out when the weather is warm. He has failed various topical therapies and has been prescribed a new biologic by his dermatologist. The patient met all of the criteria for the new medication and was excited to hear that there might finally be something to control his disease. However, upon arriving at the pharmacy one week after his office visit, he was disappointed to have the pharmacist tell him that his insurance would not cover the medication because his physician’s office had done something “wrong.”

Obviously upset, GR calls his dermatologist’s office and demands to know what went wrong, only to hear something about a “prior authorization” (PA). What GR doesn’t know is all the hoops his dermatologist and staff had to jump through just to fulfill the PA request. He also doesn’t see how many hours the dermatologist and her staff have spent this week processing a few dozen PAs on top of an ever-growing mountain of paperwork, or that they are starting to experience burnout.

Prior Authorization Burdens Both Dermatologists and Patients

The percentage of dermatologists reporting symptoms of burnout is skyrocketing: from 31.8 percent in 2011 to 56.5 percent in 2014.1 Worse, burnout among dermatologists appears to be increasing at a faster rate compared to other medical specialties. A major cause of burnout is loss of autonomy over how physicians spend their time, which is at least in part due to large amounts of documentation burden.2 Thus, ever-increasing amounts of required paperwork leave dermatologists with less time to care for their patients, causing them to experience burnout at unprecedented rates.

As described in GR’s example, PAs are a major and growing source of burdensome paperwork on dermatologists. The American Medical Association (AMA) estimates that doctors get an average of 37 PA requests per week.3 Adding to the frustration, many providers report that payers’ requirements for PA have been increasing in recent years.4 This is evident in dermatology in particular, with many first-line treatments—even simple acne medications—requiring PA. As another example, the recent growth in the number of biologics available for diseases such as psoriasis has been matched by increasing PA requirements for those medications: in 2009, only 16 percent of patients with psoriasis prescribed a biologic required PA versus 75 percent in 2014.5

As a result, PAs place immense time burdens on already-busy staff: primary care physicians spend approximately 1.1 hours per week fulfilling PA requests, clerical staff spend 5.6 hours, and nursing staff spend a whopping 13.1 hours.6 In addition, the mean payer response time may be increasing. The Department of Dermatology at George Washington University reports that payer responses for PAs for newer biologic medications are taking longer, increasing from a mean of 3.7 days in 2009 to 6.7 days in 2014.5 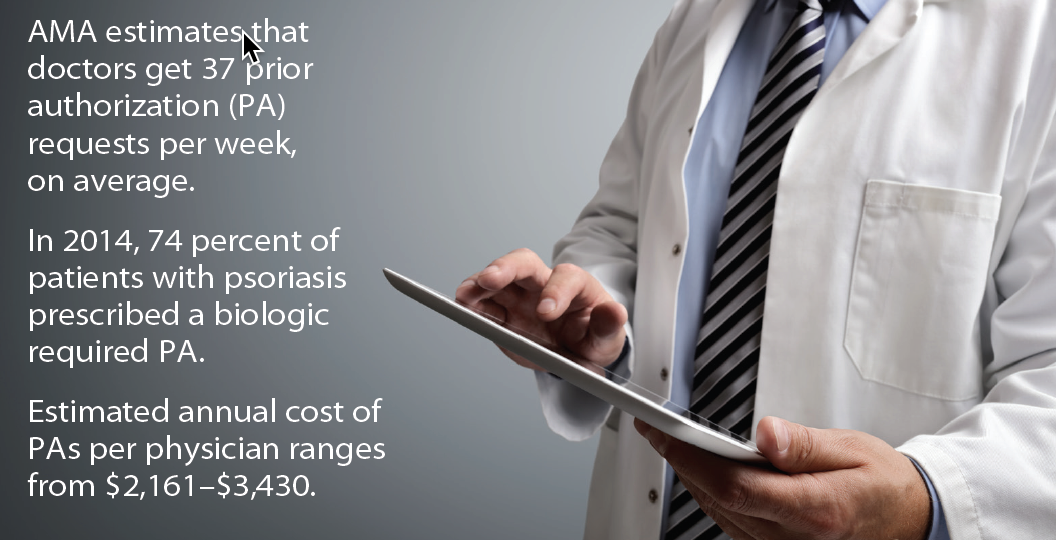 To add insult to injury, PAs incur substantial costs to practices, which are generally not reimbursable. The estimated annual cost of PAs per physician ranges from $2,161–$3,430,7 which is likely to increase further, given the current trends.

Besides burdening providers, PA requests negatively impact patients. Approximately 60 percent of patients wait nearly one business day and 26 percent wait at least three business days to receive their prescribed medication. In many cases, such as the one presented earlier, both providers and patients often only learn that a PA has been rejected at the pharmacy. This delays treatment and means that providers do not have the opportunity to prescribe another medication. Worse, approximately 40 percent of claims rejected at pharmacies are simply abandoned,8 indicating that many patients do not receive essential medication.

The major reason why the PA process consumes so many resources is that providers and their staff complete PAs outside of their normal workflows. For example, many payers require practices to use proprietary portals or manually download forms. This means physicians and their staff must often manually re-enter data or even fax requests. All of this leads to substantial administrative waste and, as mentioned above, can contribute to physician burnout. In other words, the existing PA process is a black box with too many different forms and too many points where things can slow down or be brought to a grinding halt. Fortunately, there is a solution.

How Electronic Prior Authorization Can Help to Reduce Physician Burnout

In 2011, to ameliorate the burden caused by PAs, the AMA recommended the adoption of electronic prior authorization (ePA).3 The proposed benefits of ePA are several-fold: ePA promises to reduce processing times, eliminate the need for payer-specific portals, prevent drug claim rejections at the pharmacy, reduce healthcare costs, and above all, reduce the burden on healthcare providers.

According to the AMA, ePA should integrate into existing electronic health record (EHR) systems and keep all documents within a familiar EHR system workflow. Thus, using ePA in an EHR system should drastically reduce the frequency of interruptions and frustrations caused by PA. Therefore, the ability of ePA to reduce the burden of PA on dermatologists and their staff depends on it being integrated into a “smart” EHR system that learns the unique practice style and shows only what they need to see when they need to see it. Hence, dermatology providers should ask whether their EHR system implements or will implement ePA, how it will work, and how it will reduce the burden of PA.

Ideally, the ePA workflow in an EHR system should be simple and minimize interruptions to visits and providers’ routine tasks, in sharp contrast to existing, payer-centric PA workflows. For example, we intend that in a future release, during a patient encounter in Modernizing Medicine’s EHR, EMA™, the physician will select a medication in the “Rx. tab” as usual. However, if the patient’s payer requires a PA for that medication, the provider will be notified while the patient is still in the exam room. The necessary PA will automatically be added to a list of pending PAs and be accessible to a staff member to start the process.

After a staff member has completed the information required by the payer—all within EMA—the payer will respond electronically by approving or denying the claim, or asking for more information. Appeals can be made in simple text forms using the same interface. Approved PAs can be e-prescribed as usual, hopefully requiring less staff time and with less turnaround time for the patient.

While current PAs can take up to 30 days to process, in one pilot study ePA reduced turnaround time by as much as 90 percent.9 Streamlined ePA workflows can help to reduce or eliminate wasteful duplicate submissions and rejections due to missing information.

By using EMA’s pharmacy benefit check, providers should also be able to tell patients what their out-of-pocket drug costs will be before the medication is prescribed, allowing patients to make informed choices and avoid unpleasant surprises at the pharmacy. In addition, providers or their staff should be able to switch among multiple prescription plans and pharmacies, and inform the dispensing pharmacy if a PA has been denied, cutting down on administrative waste and saving time for everyone involved.

The Future of ePA

If the thought of ePA easing the burden of PA isn’t enough incentive, ePA is likely to become mandatory across the care continuum. Twenty-eight states already have legislation requiring ePA, with additional legislation pending in other states.10 In order to advance ePA usage in Medicare Part D, Congress introduced “The Standardizing Electronic Prior Authorization for Safe Prescribing Act” in January 2018.11

As long as physicians have to file PAs, the burden falls upon EHR companies to partner with practices and make the process as painless as possible for everyone involved. The promise ePA brings to healthcare is to streamline an outdated, cumbersome process that has become overly burdensome for providers, medical staff, and their patients. ePA can also enable processes to reduce the back-and-forth among pharmacy benefits managers, pharmacies, and physician offices.

EHR systems need to empower dermatologists to focus on what they do best—caring for patients. By helping automate documentation such as ePA, smart EHR systems can enable physicians to spend more time with patients and reduce the risk of burnout.

Circling back to GR, our patient discussed at the beginning, imagine if the dermatologist treating GR had ePA integrated into their EHR system that prospectively initiated the patient’s PA. Even if the PA was declined (as it so often is), the dermatologist’s staff would have been made aware of this through the EHR system that day and could immediately file an appeal, which may be approved. Arriving at the pharmacy, GR would receive his prescription with his expected copay, preventing a lot of frustration and confusion on his part, while saving the physician and her staff aggravation and time.

Michael Sherling MD, MBA, is the Co-founder and Chief Medical and Strategy Officer of Modernizing Medicine, Inc. Dr. Sherling is responsible for the strategy and medical innovation within Modernizing Medicine’s suite of products and services for dermatology, gastroenterology, ophthalmology, orthopedics, plastic surgery, otolaryngology, and urology specialties. With CEO Dan Cane, he has developed novel software solutions for EHR, MIPS and ICD-10 automation. Under his leadership, Modernizing Medicine has established a user base of over 11,000 providers and won several awards for #1 EMRs from Black Book.

8. AMA. The Impact of ePrior Authorization on Patients and Prescribers. Paper presented at: CBI eRx/EHR Summit 2015.

Being a Leader is Good For Our Profession 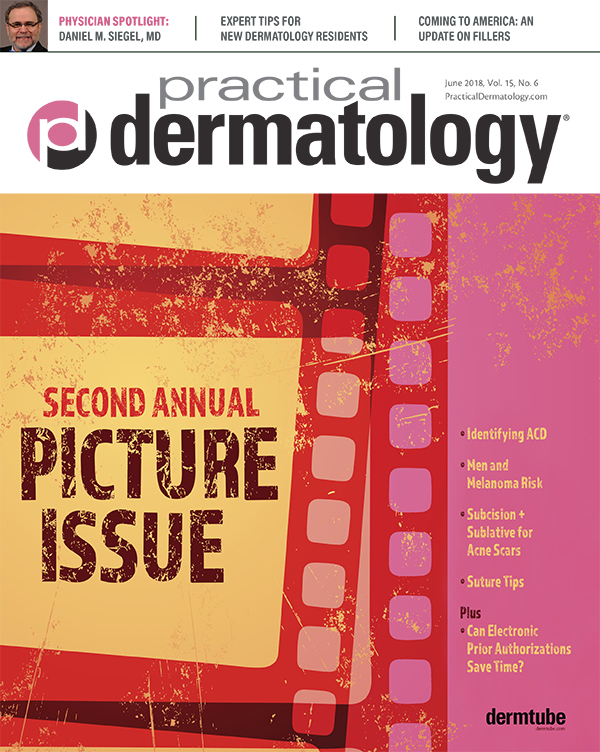 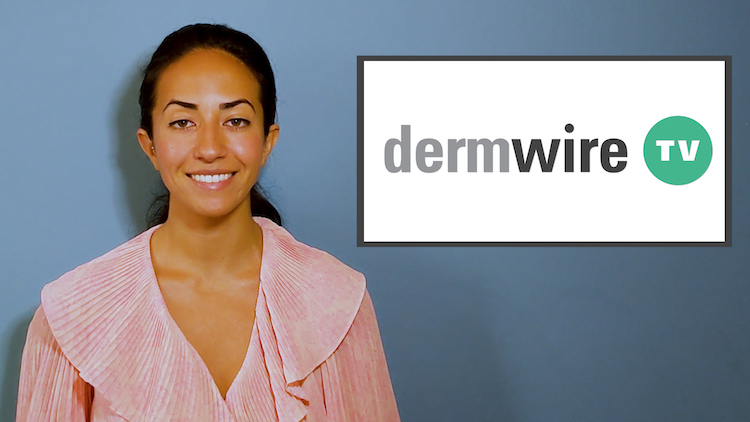