BrandMD introduced their newest sunscreen, HA Physical Tint SPF 44, a water-resistant, mineral-based formulation to provide well-rounded coverage against UVA and UVB UV radiation. In addition to its chemical-free active ingredients, the formulation also contains antioxidants as well as hyaluronic acid to combat aging of the skin, the company says. HA Physical Tint is packaged in a pearlized airless pump in a 1.8oz size. It wholesales for $19 to medically licensed physicians and is available to private label, giving more flexibility on profit margins and deterring from the competition of online sales of other brands, they say. 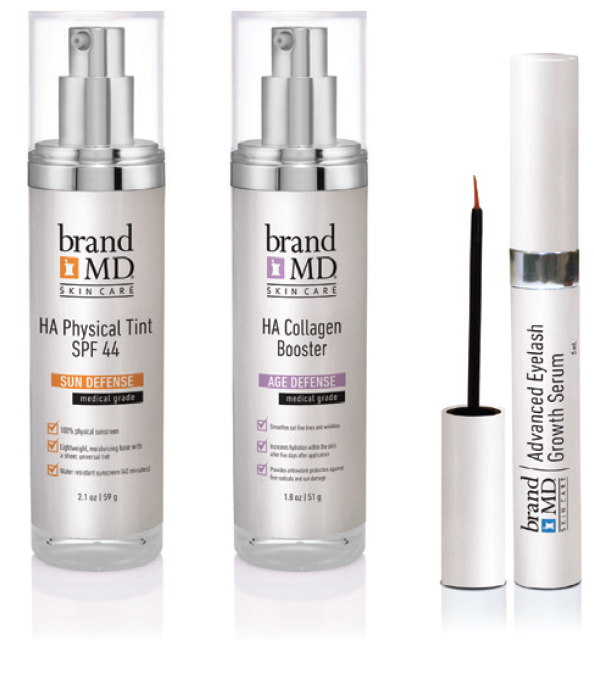 The company also offers HA Collagen Booster, which contains four forms of hyaluronic acid, ranging in low and high molecular weights to penetrate and target the skin at various depths. BrandMD Skin Care’s HA Collagen Booster utilizes hyaluronic acid to increase the moisture levels in the skin up to 48 hours post-application. In clinical trials, the multiple forms of HA effectively decrease the depth of deep wrinkles and improve the skin’s texture and roughness by up to 10 percent. In addition, the product is formulated with a powerful antioxidant, red grape seed extract, to combat against free radicals and sun damage which lead to premature aging of the skin. Packed as an 1.8oz airless pump, it wholesales for $49 to medically licensed physicians and is also available as a private label. 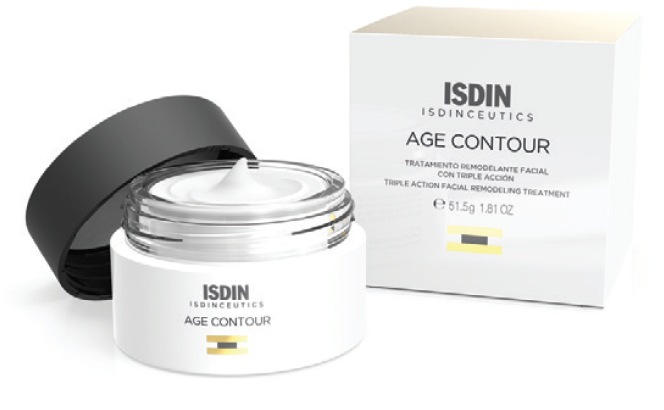 Research suggests that up to 63 percent of patients with psoriasis will have genital involvement at some point during the disease course (JAAD 72(6):978-83). Genital psoriasis (GP) may be under-recognized, and patients may not address it with their dermatologists. “Even before this study was done, we had some insight that genital psoriasis is usually not discussed with healthcare providers,” says Jennifer Cather, MD, lead author of a new study, presented at the annual meeting of the AAD, that assessed the impact of ixekizumab (Taltz, Lilly) on genital psoriasis. “It’s not usually discussed with partners. It’s usually hidden and then when people are not flaring, then they’ll engage in sexual activities.”

For the study, 149 patients with GP were randomized to receive ixekizumab or placebo. The impact of GP on sexual activity was measured using the Genital Psoriasis Sexual Impact Scale (GPSIS) which is composed of the Sexual Activity Avoidance (Avoidance) and Impact of Sexual Activity on Genital Psoriasis Symptoms (Impact) subscales, the Sexual Frequency Questionnaire (SFQ) item 2, and the Dermatology Life Quality Index (DLQI) item 9. Results showed that ixekizumab resulted in a rapid and significant decrease in the impact of GP on sexual activity, including how often GP limited sexual frequency.

On one measure, the impact of ixekizumab treatment was evident by week 1 SFQ item 2 0/1 (p<0.05). Additional measures with early response were week 2 for DLQI item 9 0/1 (p<0.001), and week 4 for GPSIS-Avoidance 1/2 (p<0.01). At 12 weeks, 92 percent of patients treated with ixekizumab compared to 56.8 percent of patients treated with placebo reported no (0) or little (1) sexual difficulties attributed to skin symptoms of psoriasis.

Dr. Cather notes that in some cases, psoriasis will affect the genitals only (equivalent to about one percent BSA). In some other cases, psoriasis will affect the genitals and a small plaque elsewhere on the body. While the BSA involvement may not be extensive, the impact of GP can be, suggesting that more advanced treatment options may be indicated.

Dr. Cather points out that prior to seeing a dermatologist patients may have tried over the counter treatments or received topical prescriptions from general practitioners with little effect. That treatment failure may qualify the patient to try a systemic drug. “You don’t need to redo things,” she says. “You don’t have to wait around.”

Noting that patients may be embarrassed by the condition or may not realize GP is a form of psoriasis, Dr. Cather urges dermatologists to question all psoriasis patients about possible genital involvement. “I think that if we could just do that, it would help so many people,” she says.

The presentation of psoriasis on the genitals may differ from the typical disease presentation elsewhere on the body, Dr. Cather notes. “The lesions in the genitals usually are not thick and scaly. It’s usually macular, red. They might have more fissures. Sometimes they can actually have pustules in that area,” she says. If the diagnosis isn’t clear, ask patients if they have psoriatic plaques anywhere else on the body. Additionally, ask if the genital lesions worsen due to trauma, as this is common with GP.

Ortho Dermatologics, a division of Valeant Pharmaceuticals North America, LLC, shared the results from an analysis of the Phase 3 clinical trial AMAGINE-1, which evaluated mental health comorbidities associated with psoriasis, such as anxiety and depression, at the 76th Annual AAD Meeting.

“Anxiety and depression occur more frequently among patients with psoriasis than the general population,” explains Dr. Melinda Gooderham, medical director at the SKiN Centre for Dermatology in Peterborough, Ontario, in a release. “The data from AMAGINE-1 demonstrated that patients who switched from placebo to SILIQ had lower scores for disease-related anxiety and depression.”

Also presented at the meeting was a pooled analysis of the Pivotal Phase 3 clinical trials AMAGINE-1, -2 and -3, which demonstrated that the safety profile of SILIQ at year two of treatment for patients with moderate to severe psoriasis was similar to its safety profile at year one of treatment.

In addition to its effects on skin inflammation, Stelara (Ustekinumab, Janssen) reduces aortic inflammation, report researchers from the Perelman School of Medicine at the University of Pennsylvania at the annual meeting of the AAD.

Patients who took ustekinumab had a 19 percent improvement in aortic inflammation, as measured and confirmed by imaging, when compared to the placebo group, the study showed.

“The type of inflammation we see in psoriasis is similar to what we see in atherosclerosis—a type of heart disease that involves the build-up of fats, cholesterol, and inflammatory cells in the artery walls,” says lead author Joel M. Gelfand, MD MSCE, a professor of Dermatology and Epidemiology at Penn, in a news release. “Since ustekinumab blocks the specific pathways involved in in both skin and cardiovascular inflammation, we wanted to test whether it can improve aortic vascular inflammation.”

Psoriasis patients were randomly divided into two groups, with 21 patients in the placebo group and 22 patients receiving the treatment. The primary outcome was aortic inflammation, as measured by 18-FDG-PET/CT scans. The imaging was performed before treatment and at 12 weeks.

The treatment group saw a 6.6 percent decrease in aortic inflammation, while the placebo group saw a 12 percent increase. As expected, ustekinumab also resulted in a dramatic improvement in skin inflammation as well, with 77 percent of treated patients achieving a 75 percent or better improvement in psoriasis activity, compared to just 10.5 percent in the placebo group. Both findings were highly statistically significant (p≤0.001).

Also from Janssen, new long-term findings from the Phase 3 VOYAGE 2 study show that a vast majority of patients with moderate to severe plaque psoriasis receiving Tremfya (guselkumab) who achieved at least PASI 90 at week 28, maintained a PASI 90 response with continuous treatment through week 72.

Bhaskar Srivastava, MD, PhD, Director of Medical Affairs in Dermatology at Janssen Scientific Affairs notes in an interview that the data are reassuring, given the reality that in some cases patients will have a medically necessary reason to take a pause from therapy. “An aspect of the VOYAGE 2 data I’d like to highlight is the retreatment phase for patients who were randomized to placebo at week 28,” Dr. Srivastava says. “Approximately nine out of 10 patients who were retreated with Tremfya were able to recapture the high-level PASI90 response by 28 weeks after redosing; and many recaptured the response earlier.”

The Tax Cuts and Jobs Act: What You Need to Know 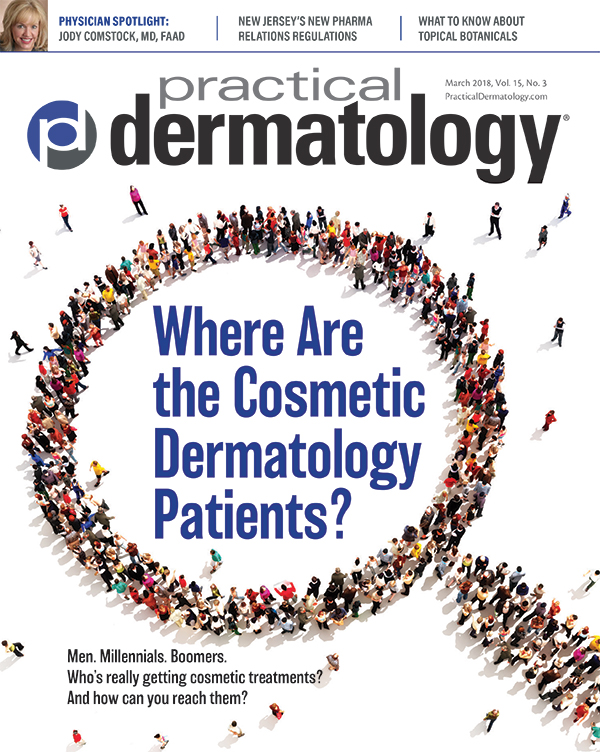