Health Disparities and Skin Cancer In People of Color

Skin cancer diagnosis and treatment may be delayed in people of color, contributing to poor prognosis.

People of color (POC) is a phrase commonly used in the United States to refer to ethnic and racial minorities. Dermatologic literature highlights health disparities in POC across a number of diagnoses, notably including skin cancer.1,2 While POC have a wide range of backgrounds, they most often have Fitzpatrick skin types III to VI.1 As the US population continues to transform, with projections of non-whites being the majority by 2060,1,3 it is imperative for dermatologists to understand potential disparities that affect patient presentation, management, and outcomes in POC.

The Problem of Skin Cancer in POC

Nonmelanoma skin cancer (NMSC) is the most common malignancy in the United States, and incidence continues to rise.6 While basal cell carcinoma (BCC) is the most common type of NMSC in whites, Hispanics, and certain Asian populations (Chinese and Japanese), squamous cell carcinoma (SCC) is most common in blacks and Asian Indians.7 Melanoma incidence is estimated to be 45.8 in whites, 6.8 in Hispanics, 5.72 in Asian Americans, Native Americans, and Pacific Islanders (AANAPI), and 1.35 in blacks per 100,000 persons.8 Though incidence of skin cancer is low amongst POC, disproportionately higher rates of morbidity and mortality are seen in these groups.7,9-13 SCC, for example, most commonly develops within chronic scars in blacks and has a 20-40 percent metastasis rate and greater mortality compared to the typical rate of one to four percent in solar-induced SCC in whites.14-16 All minority groups tend to have a worse melanoma prognosis, but the greatest discrepancy has been observed in blacks, with this group being four times more likely to present with stage IV disease and 1.5 times more likely to die from melanoma than whites.17 This all-cause mortality rate remains even after adjusting for age, gender, stage, decade of diagnosis, and treatment.11,12 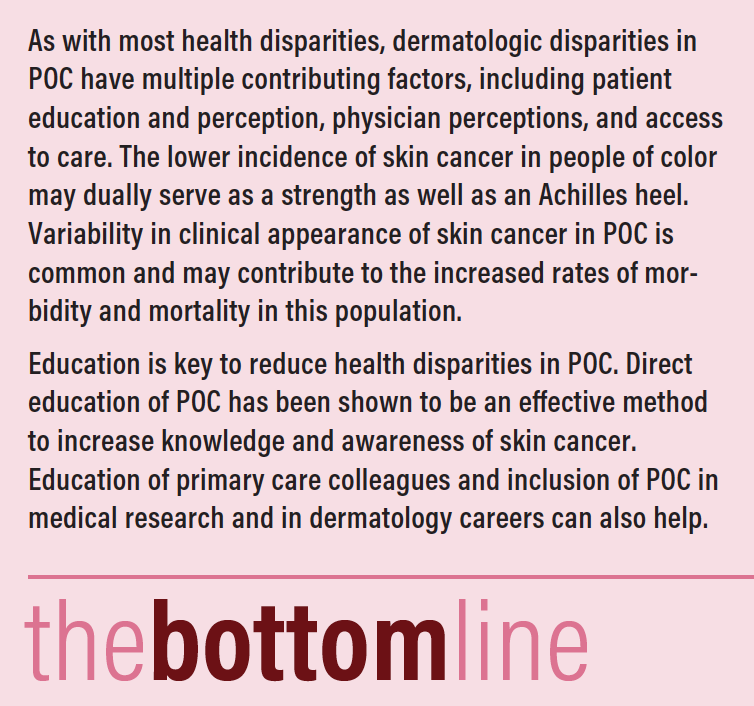 As with most health disparities, dermatologic disparities in POC have multiple contributing factors, including patient education and perception, physician perceptions, and access to care. The lower incidence of skin cancer in people of color may dually serve as a strength as well as an Achilles heel. Patients with lower risk of skin cancer understandably are less likely to perceive themselves as at risk for it18 and thus are less likely to institute preventive measures. A recent study of black and Hispanic young adults found that they were less likely than whites to practice sun safety habits due to lack of family history of skin cancer, limited discussions on skin safety, and a rare history of sunburns.10

Misperceptions about skin cancer are more common in groups with poorer skin cancer outcomes, including POC. An analysis of the Health Information National Trends Survey indicated that blacks were less likely to believe that skin cancer is caused by lifestyle,18 yet we know that ultraviolet radiation exposure is the greatest risk factor for BCC in all skin types.7 Both blacks and Hispanics were also found to be more likely to believe that skin cancer is preceeded by pain or other symptoms and that there is not much one can do to lower the risk of skin cancer.18 Such misperceptions indicate inadequate knowledge of the important role of lifestyle choices in skin cancer risk reduction and prevention.

Differing locations of NMSC in POC could also play a role in skin cancer disparities. While fairer skin tones tend to develop SCC in heavily sun-exposed areas, SCC is found more frequently in non-exposed skin in POC—such as lower extremity and anogenital regions—at a rate estimated to be 8.5 times greater than whites.9,13 Melanoma develops at an increased frequency in the lower extremities and the plantar foot in POC.8,9,19 These are areas that people often do not notice on themselves, and POC are less likely to perform self-skin exams.20 Such factors likely contribute to delayed presentation and poorer outcomes.

It is not just patient perceptions, but those of dermatologists, other physicians, and non-physician clinicians that can affect skin cancer disparities. We tend to expect classic presentations, but variability in clinical appearance of skin cancer in POC is common9,21,22 and may contribute to the increased rates of morbidity and mortality in this population. For example, we commonly see BCC as a translucent, solitary nodule with central ulceration.22 However, more than 50 percent of BCCs in POC present with increased pigmentation, potentially masking translucency and the visibility of telangectasias.7 This has been described as the “black pearly” appearance in Asians.13,23,24 SCC in POC has a wide range of clinical presentations including non-healing ulcer, scaly plaques, nodules, granulomatous lesions, verrucous papules and plaque.23 Acral lentigous melanoma (ALM) can resemble a traumatic injury or fungal infection.25 Different presentation can increase the likelihood of skin cancers being diagnosed as more common benign lesions, such as seborrheic keratoses, leading to delayed treatment. 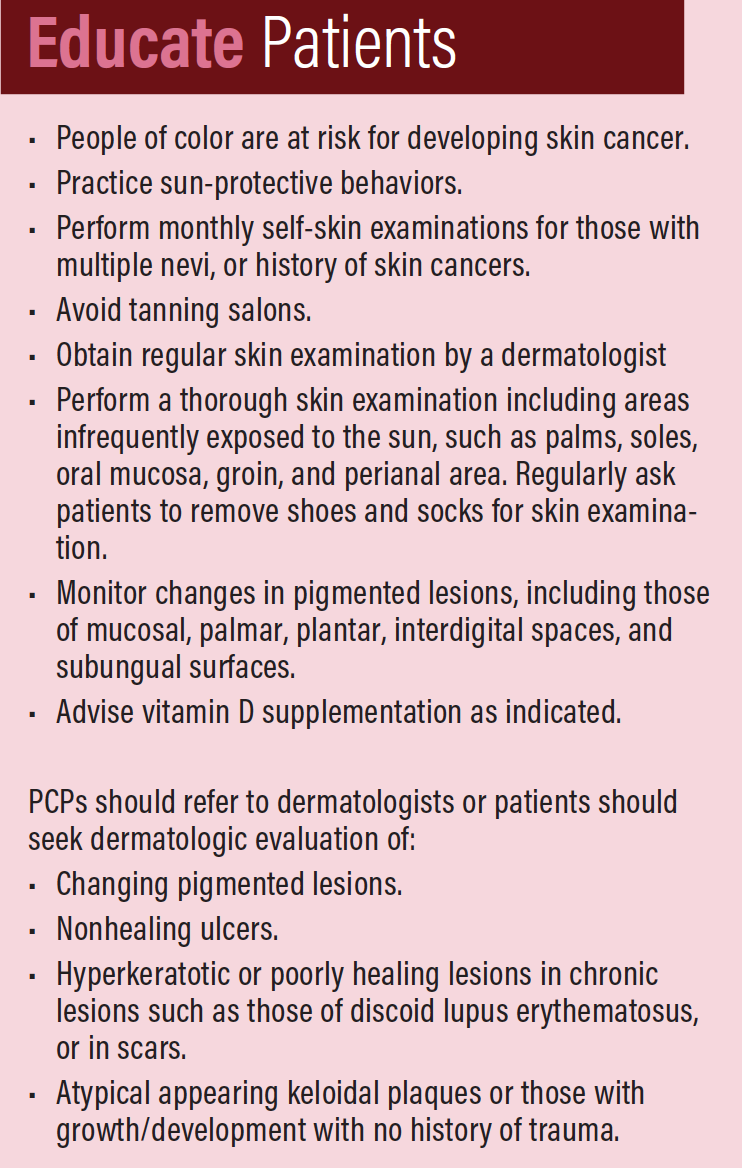 Though limited access to care is thought to play a role in skin cancer disparities in POC, there is limited research on this topic. We know that overall there is decreased access to dermatologic care due to the shortage of dermatologists (overall and dermatologists of color), unequal geographic distribution of dermatologists, insurance limitations, and other factors.26,27 Given the shortage of dermatologists, it is no surprise that, according to the Medical Expenditure Panel Survey, 60 percent of skin conditions seen over the study period were diagnosed by primary care physicians or non-physician clinicians.20 The same survey also found it significantly less likely for blacks and Asians to see a dermatologist compared to whites. A 2018 study showed that in patients with dermatologic conditions, whites were twice as likely to visit an outpatient dermatologist as blacks and Hispanics.28 Non-white race was recently identified as an independent risk factor for delay in melanoma excision surgery of six weeks or longer.29 However, patients diagnosed or treated by a dermatologist were less likely to experience such a delay.

So what can we do to reduce health disparities in POC? 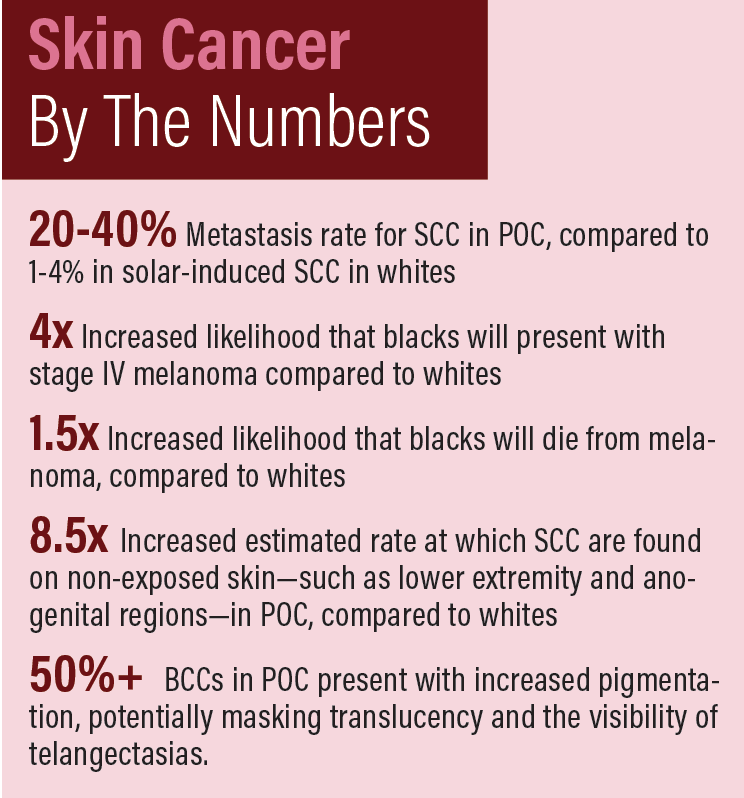 Knowing that we may see a comparatively smaller amount of POC compared to our primary care colleagues, efforts to increase non-dermatologists’ awareness of skin cancer in POC are warranted. The American Academy of Dermatology (AAD) recently identified a number of recommendations for physicians regarding skin cancer prevention in POC.23

The involvement of POC in continued scientific and clinical research may also decrease the health disparities gap. US history and treatment of minorities in science has caused traditionally minimal involvement of POC in research and this is true in the field of dermatology as well.4 A recent five-year retrospective analysis showed the 74.4 percent of dermatology research subjects were reported as white.5 Community engagement strategies (forming outreach teams, using cultural competency, developing relationships with the community, etc.) have been suggested to increase research participation.35,36

Increasing POC in the dermatology workforce is another proposed strategy for increasing dermatologic access and reduced disparities for POC. An increase of physicians of color encourages more equitable patient-physician relations and patient perceived support from their physician, as racial concordance plays a role in these views.37 The AAD has undertaken a number of strategies to recruit underrepresented minorities (blacks, Hispanics, and Native Americans) into the field of dermatology.27 As dermatologists, we can contribute to the effort of increasing awareness of our field through mentorship and involvement with local pre-medical students and medical dermatology interest groups. We can also partner with organizations specifically geared to students of color, like the Student National Medical Association and its local chapters, to increase exposure to the field. Such calls to action will bring us closer to a workforce better representing our continually diversifying nation.

Kesha Buster, MD, FAAD is founder and director of VibrantSkin Dermatology and Laser. Her clinical research has focused on topics in skin of color and dermatologic health disparities and she has served as an invited speaker both nationally and internationally. She is a pioneer in the direct dermatologic care movement and has successfully launched a direct care practice to provide dermatologic services to patients regardless of insurance status. She is an active member of the American Academy of Dermatology and currently serves on the Diversity Task Force.

Ekene Ezenwa is a third-year medical student at the University of Oklahoma – School of Community Medicine. She is interested in pursuing a career in dermatology with an emphasis in public health. She was recently selected as a mentee for the American Academy of Dermatology Diversity Mentorship Program through which she will continue exploring social health in dermatology. She received her Bachelor’s Degree for the University of Oklahoma in Health and Exercise Science. ekene-a-ezenwa@ouhsc.edu.