Melanoma is the most aggressive form of skin cancer and is responsible for more than 90 percent of skin cancer deaths. Genes are a known risk factor for developing melanoma and mutation patterns may have an impact on treatment choice when the melanoma has started to spread.1

We set out to determine whether targeted sequencing of excised tumor samples can be used to distinguish melanoma from dysplastic nevi and cell-free DNA (cfDNA). DNA of tissue and plasma was investigated by next generation sequencing (NGS) (Qiagen GeneReader) including analysis (QIAGEN Clinical Insight Analysis, QCI-A) and interpretation software. We employed the GeneRead QIAact Actionable Insights Tumor Panel (Cat. No. 181910) covering the most tumor-relevant genes including 773 unique variant positions in KRAS, NRAS, KIT, BRAF, PDGFRA, ALK, EGFR, ERBB2, PIK3CA, ERBB3, ESR1, RAF1 and compared the results with the histopathological diagnosis.

In this context we present a patient (born in 1926, male) who developed four melanomas on different areas of his body in 2016. We followed the study procedure to analyze the cfDNA from a plasma sample prior to excision. Histological findings, the tumor location and pathological data are reported in Table 1. 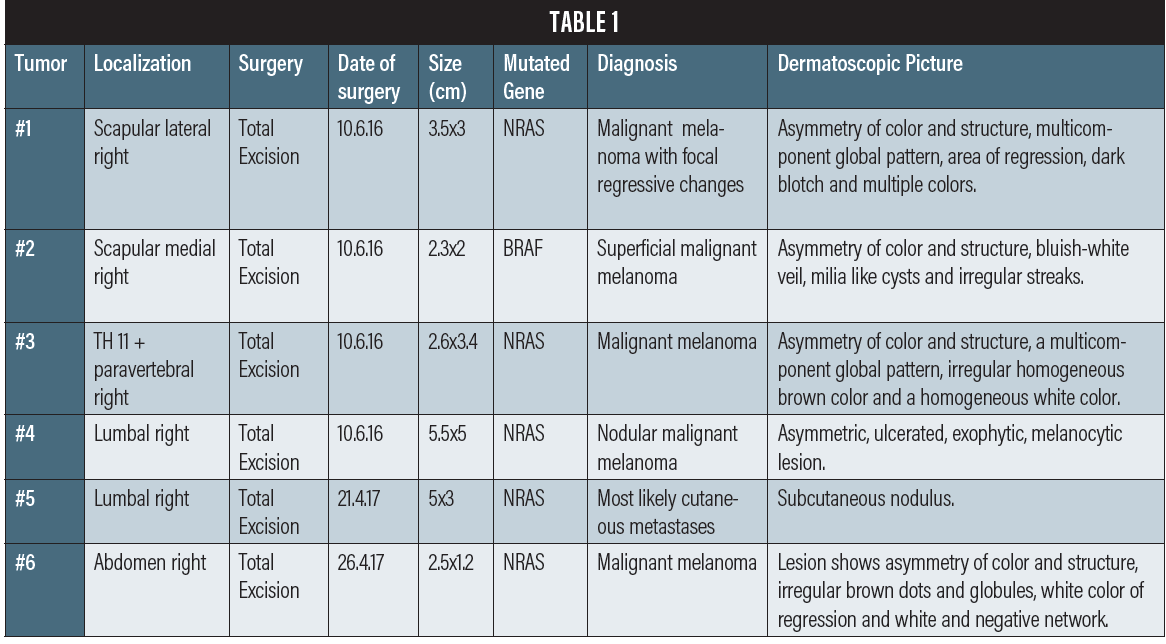 All excised malignant skin samples were correctly detected as pathogenic by the Gene Reader analysis system (QCI-A). We observed that tumors No. 1 and 4 showed a mutation in the NRAS gene on position 181C>A. Yet the two tumors presented a different clinical appearance and had a different histopathological diagnosis. Tumor No. 2, which presented a totally different clinical picture, had a different gene mutation (Figure 1). One year later, the patient developed two new lesions; one was a large local melanoma metastasis from tumor No. 4 (now referred as tumor No. 5) (Figure 2). The other tumor appeared de novo (tumor No. 6) (Table 1). 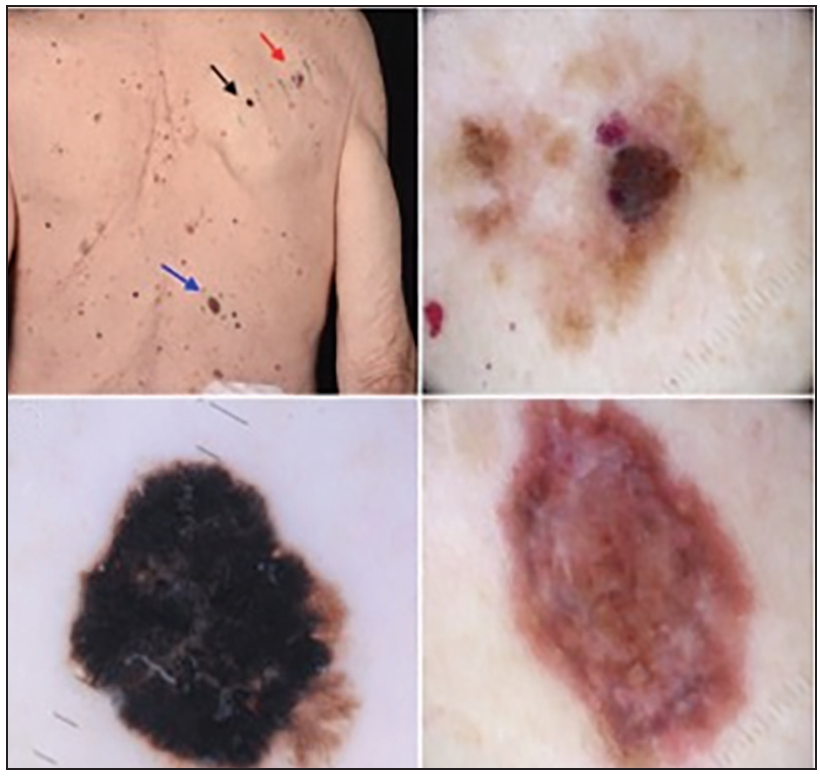 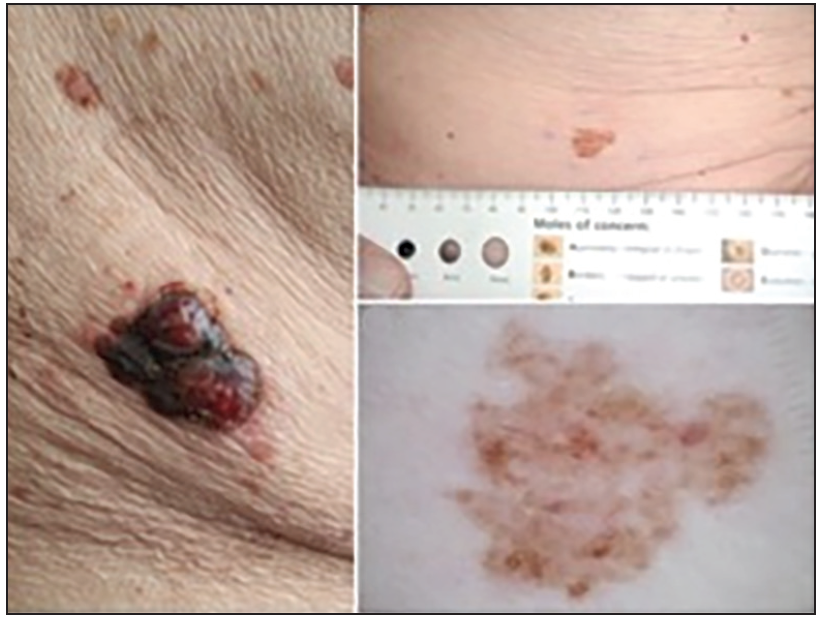 We also investigated the normal skin next to the tumor of the patient as a control sample and no pathogenic variants were detected by the NGS system. This matches with the histopathological tissue, which showed tumor-free resection margins. Also the lymph nodes were not affected at this stage. Sequencing of cfDNA did not reveal any pathogenic variants. This is in line with the fact that there were no hematogenic metastases at this point.

All tumor tissues except tumor No. 2 presented a mutation in the NRAS gene (Table 1). These results are very uncommon, given the fact that mutations in BRAF genes are much more frequent than mutations in NRAS genes in the development of melanomas.2 There was no connection notable between tumor location and certain mutations. Figure 1 shows that tumor No. 2 (the only one with a mutation in the BRAF gene) showed differences both in the clinical picture and the dermatoscopic image. It is necessary to mention that all melanomas occurred on skin that was not chronically sun damaged. Our results correlate well with the findings of a 2005 study by Curtin et al, which identified genetic alterations in melanomas at different skin areas with different levels of sun exposure. This study indicated that there are different genetic pathways in the development of melanoma and describes that melanomas with NRAS or BRAF mutations are more common in non-sun-exposed skin.3

The QCI-I (interpretation) tool also provides therapy suggestions, shown in Table 2. Table 3 shows that both the local metastasis of tumors No. 5 and No. 6 present the same gene mutation with the exactly same variant. 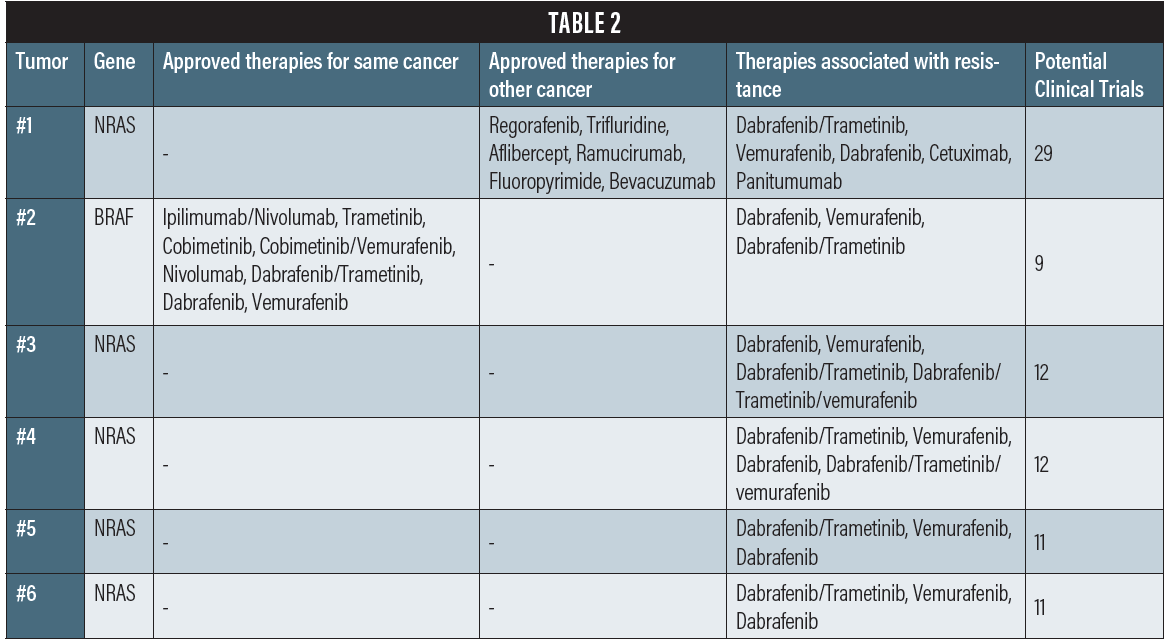 The presented case is special due to the high frequency of developed melanomas on different skin locations within only two years and no history of melanoma prior to this event.

The results of the histopathological findings were concordant with the results of the NGS system. All tumors were classified as pathogenic and the negative control test was passed. The tumors appearing one year later show the same gene mutation with the exactly same variant as tumors No. 1 and No. 4. The cfDNA analyzed prior to excision showed no highly pathogenic signs, which is in line with the fact that there were no hematogenic and lymphogenic metastases at this point of time.

New Products/New In My Practice: Sunscreen