Severe cases of pemphigus vulgaris (PV) are typically treated with high doses of systemic steroids. Rituximab, a chimeric (human/mouse) monoclonal antibody directed against CD20 of B lymphocytes, was recently approved by the FDA for the treatment of PV and has become an attractive alternative or adjunct to conventional steroid therapy to minimize side effects and improve patient outcomes. Though its side effect profile is much improved from steroids, rituximab therapy is not without complications. For instance, administration of biologic therapeutic antibodies, such as rituximab, produces an immunogenic response, resulting in immediate infusion reactions and, less commonly, delayed serum sickness.1,2 We report on a case of rituximab-induced serum sickness (RISS) in a patient 12 days following rituximab infusion that resolved within a few days with supportive management. 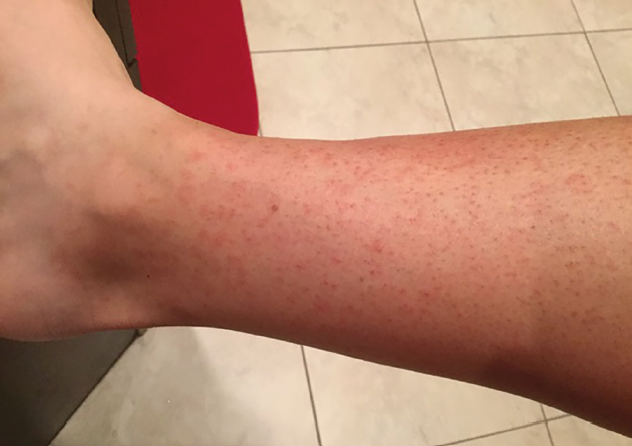 Figure 1. Erythematous and morbilliform macules and papules starting in the extremities and spreading to the trunk.

Twelve days following the first rituximab infusion, the patient noticed “bumps” on her lower legs, which coalesced as a “red rash” and spread to her upper legs, torso, back, and arms the following day.

She emailed photographs to our clinic of a rash consistent with erythematous macules and papules (Figure 1).

The lesion was accompanied by general malaise, chills, headache, paresthesia in the fingers and toes, abdominal pain, and diffuse joint pain. The patient took over-the-counter Benadryl and Zyrtec. Symptoms improved the next day and the rash receded within a few days.

The patient presented to the clinic 10 days after symptom onset. Notable laboratory findings included elevated C-reactive protein (17.7) and desmoglein 3 antibody (156, positive>20), and platelet count within the lower limit of normal (157, N 140-400 thousand/uL). Biopsy and human anti-chimeric antibody (HACA) testing were not performed due to lesion regression.

The diagnosis of RISS was made based on history and physical findings, most notably her rash, systemic symptoms, and joint pain that quickly resolved. Due to the resolution of her RISS at the time of her visit, oral steroids were not required; however, avoidance of future rituximab infusion was advised.

In addition to its FDA-approved and off-label indications in treating various other autoimmune diseases and hematologic malignancies, rituximab has become increasingly prescribed for PV, with no significant difference in outcome observed between the lymphoma (four weekly infusions 375mg/m2) and rheumatoid arthritis (two 1,000mg infusions separated by two weeks) protocols.3

While rituximab’s side effect profile is significantly improved from that of steroids, there are still notable side effects of which dermatologists should be aware. The vast majority of side effects, as expected with any immunosuppressive therapy, have an infectious etiology.1

Other less common side effects are immune-mediated. Specifically, HACA antibodies against rituximab may partially explain the high relapse rate and immunogenic side effects improved with steroids. Immediate infusion reactions, mediated by cytokine release by rituximab’s target cells, typically present with mild autonomic instability and are managed supportively. In contrast, serum sickness is a delayed type III hypersensitivity reaction observed one to two weeks after initial exposure due to the development of IgM antibodies against rituximab, resulting in widespread immune complex deposition and subsequent inflammatory response.

RISS is rare, with only 33 cases identified in a recent systemic review.5 To our knowledge, RISS has been observed in only one other PV patient.2 Diagnosis of RISS is clinical, based on the patient’s symptoms and timing relative to source exposure. Lab findings may be helpful in ambiguous cases (Table 1). Biopsy typically is not helpful; histologic findings are variable and nonspecific. Differential diagnoses include infection (i.e. viral exanthems, disseminated Neisseria, Rocky Mountain Spotted Fever, scarlet fever), Type IV hypersenstivity drug reaction, DRESS syndrome, leukocytoclastic vasclitis, and Henoch-Schonlein purpura. The disease is typically self-limited and managed supportively. If necessary, corticosteroid administration results in complete resolution within 2.15+/-1.34 days.5 Avoidance of subsequent rituximab infusion is advised.5

We report a rare case of RISS in a PV patient. While rituximab has a better side effect profile than conventional steroid therapy, its immunogenic side effects and high relapse rates are prompting research into potential alternatives. Accordingly, fully-humanized monoclonal antibodies against CD20, (such as obinutuzumab, ocaratuzumab, ocrelizumab, and veltuzumab), are an active area of research and may reduce relapse rates and immunogenic side effects. Until then, dermatologists need to be aware of RISS as the use of rituximab increases for bullous diseases.

No funding was provided for this paper. The authors have no conflicts of interest to disclose.

Have an interesting case to share?
Practical Dermatology® is seeking submissions for the 2018 Resident Resource Center. A panel of physician editors will select a best paper for the year.

The winner will be recognized in Practical Dermatology® magazine and DermWire.com and receive a reward of a $200 American Express gift card.

Angela Weatherall, MD is a dermatologist in Boca Raton, Florida.

Biologics in Psoriasis: The Next Generation