A 47-year-old woman presented with a sudden-onset, asymptomatic eruption of the face and neck during an inpatient admission for the management of septic shock secondary to pneumonia and hyperglycemia. Her hospital course was complicated by acute renal failure requiring dialysis. Apart from dyspnea, fatigue, and productive cough, she denied any other systemic symptoms, including fever and chills.

Her medical history was also notable for poorly controlled, insulin-dependent diabetes mellitus, as well as breast cancer treated with chemotherapy, radiation, and bilateral mastectomy performed several years ago. While she reported a history of acne during her teens, she denied having had any acneiform lesions on her face immediately preceding this eruption.

Physical exam was notable for several monomorphic, skin-colored to hyperpigmented papules with firm, rough spines scattered throughout the face, most pronounced overlying the forehead and cheeks (Figures 1, 2, 3). Firm, hyperpigmented papules and plaques were also appreciated on bilateral helices and at a central line insertion site (Figures 1, 2, 4). 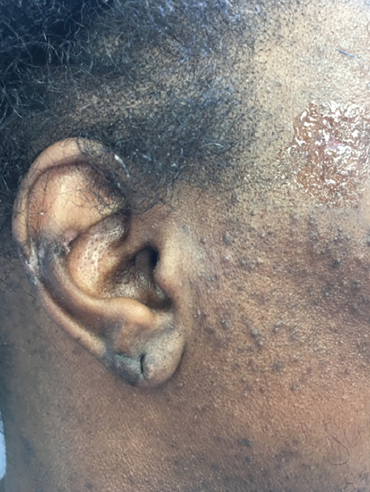 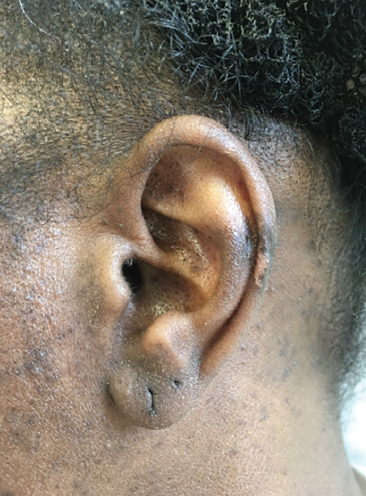 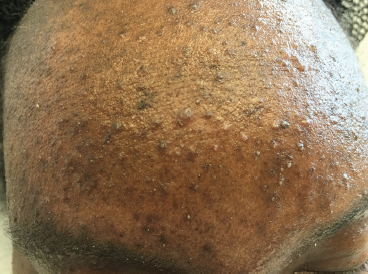 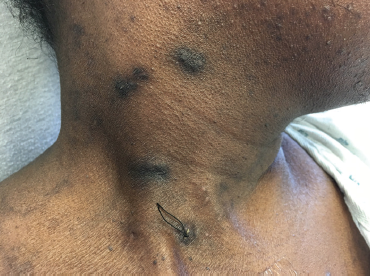 Punch biopsy of a lesion from the right temple revealed osteoma cutis (Figures 5, 6). 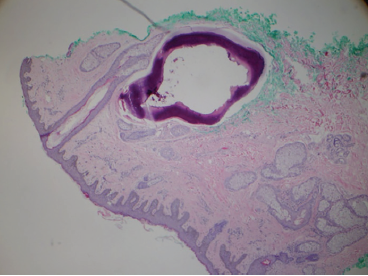 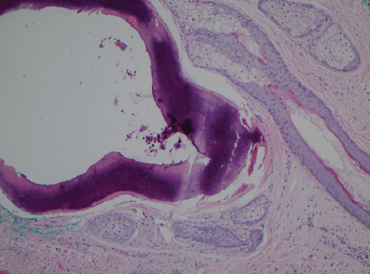 The clinical presentation and histologic findings were consistent with miliary osteoma cutis.

The primary team had initially prescribed triamcinolone ointment, which was discontinued following dermatology consultation. The patient was briefly treated with clindamycin lotion without improvement in her facial lesions. She continues to use only moisturizers. At discharge, her renal function improved, and she no longer required additional dialysis.

The lesions remained unchanged when she was seen in dermatology clinic for follow-up management. Three test spot lesions were treated with a 2940nm dual mode Er:YAG laser. The patient was scheduled for additional treatments, however she did not return to clinic and was lost to follow-up.

Miliary osteoma cutis of the face is a rare disorder typified by the presence of asymptomatic, firm papules and nodules with bony spicules on the facial skin, occurring mainly in middle-aged female patients. Lesions can also be found on the neck, chest, shoulders, upper arms, and back. Several conditions may secondarily cause miliary osteoma cutis as summarized in the table below.

Primary osteoma cutis is a diagnosis of exclusion after no secondary cause has been recognized. The majority of patients who have developed miliary osteoma cutis report a history of acne during their youth, as is the case in this patient. It has been suggested that these lesions tend to arise in prior acne scars; although in one case series, multiple patients developed lesions on the inferior aspect of their chins, where they denied having had acne scars or acne lesions during their youth.1

The pathogenesis of military osteoma cutis remains unclear. A theory offered by some authors is that chronic inflammation may trigger the differentiation of mesenchymal cells, such as fibroblasts, to differentiate into osteoblasts, with the resulting formation of ossific foci in the dermis and subcutis.2

Diagnosis can be confirmed via histologic examination of a skin biopsy specimen as well as imaging studies, specifically CT scanning.3 Interestingly, a retrospective chart review of the radiology literature asserted that small, calcified nodules are a somewhat common, age-related finding on the face, suggesting that this may be a more common disorder than previously proposed.4

This case was presented to increase awareness of a rare disorder and to discuss potential strategies in diagnosis and management. 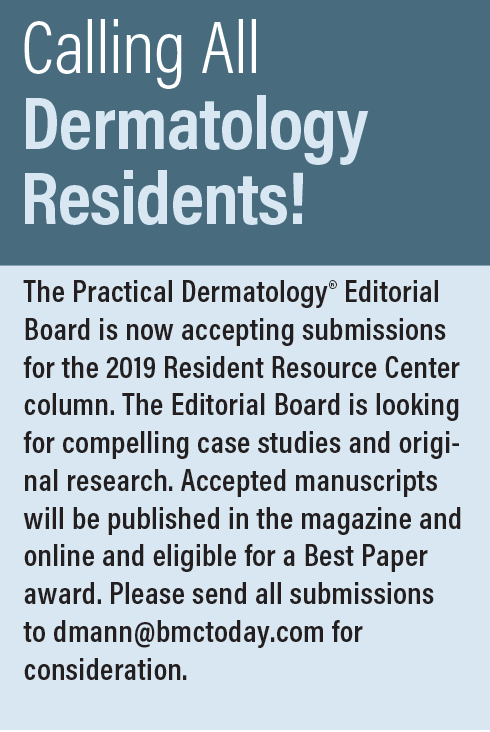 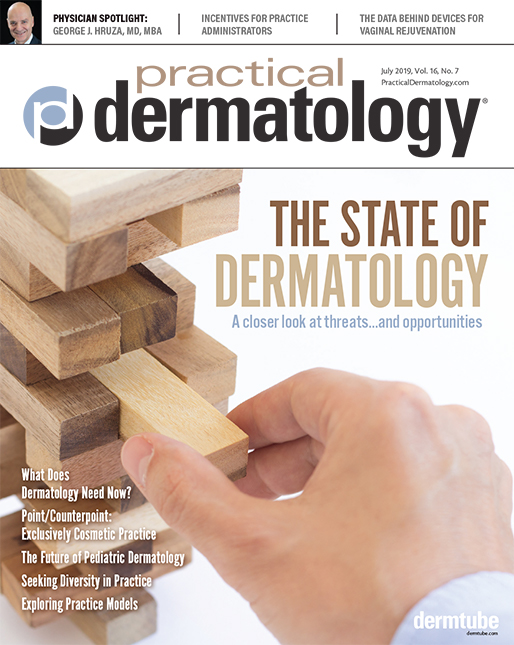