A Closer Look at Skyrizi

The newest IL-23 blocker for psoriasis may prove to be a blockbuster, according to analysts.

In a previous psoriasis Clinical Focus column (February 2019, available online at PracticalDermatology.com/issues/2019-feb), I urged readers to become more familiar with Interleukin-23 (IL-23) monoclonal antibodies. Now we will take a closer look at a newcomer to this growing class. 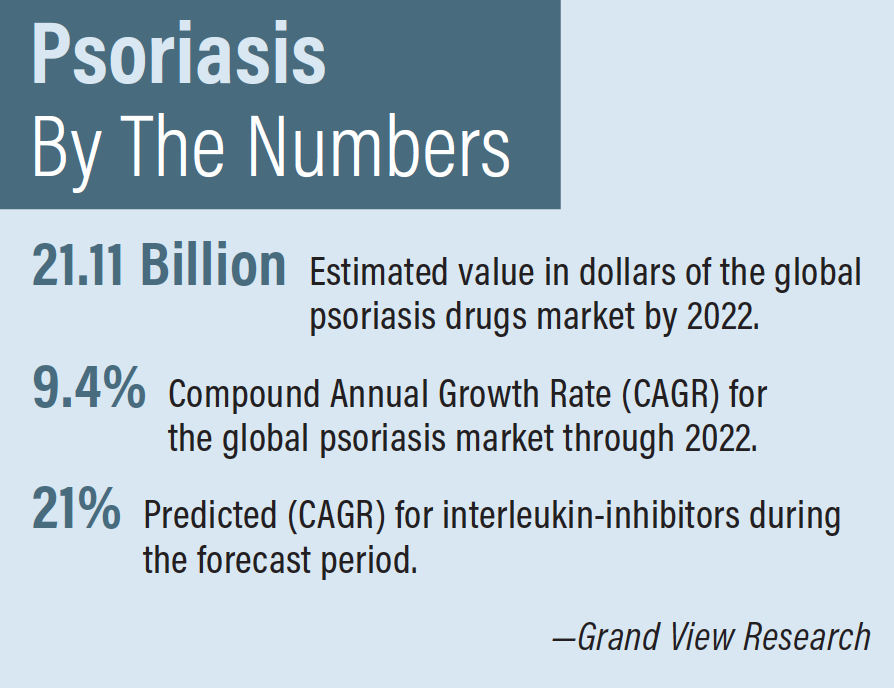 The approval of risankizumab was based on two replicate phases 3 trials—UltlMMa-1 (506 subjects) and UltlMMa-2 (491 subjects)—that compared the efficacy and safety of risankizumab against that of ustekinumab (Stelara, Janssen). Study patients were stratified by weight and previous exposure to tumor necrosis factor (TNF) inhibitors and randomly assigned (3:1:1) to receive 150mg risankizumab at weeks 0 and 4 and then every 12 weeks, 45mg or 90mg ustekinumab (weight-based per label), or placebo. The demographics of the three cohorts were similar. Patients had an average age of 47, and one quarter had a body weight above 220 lbs. Thirty percent of patients had psoriatic arthritis (PsA) and 38 percent had been on a biologic therapy in the past. The average Psoriasis Area Severity Index (PASI) was 20 when the studies began. Co-primary endpoints were proportions of patients achieving a 90 percent improvement in the PASI (PASI 90) and a static Physician’s Global Assessment (PGA) score of 0 or 1 at week 16.

Risankizumab, given at the same frequency of administration to ustekinumab, has higher efficacy and similar safety profiles. There is no variation in PASI 90 response at week 52 in risankizumab-treated groups based on age, baseline PASI, PsA diagnosis, or biologic status. There was a slight loss of response seen in patients with BMI >30.

Also last month, the European Commission (EC) approved Skyrizi (risankizumab) for the treatment of moderate to severe plaque psoriasis in adult patients who are candidates for systemic therapy. Approval allows for the marketing of Skyrizi in all member states of the European Union, as well as Iceland, Liechtenstein and Norway.

“In clinical studies, patients saw significantly higher rates of skin clearance with Skyrizi compared to current standards of care,” says Hervé Bachelez, professor at the University Paris Diderot and the Department of Dermatology of the Saint-Louis Hospital-Assistance Publique Hôpitaux de Paris, France and a principal investigator of the ultIMMa-2 study. “As many as 80 percent of patients who achieved clear skin at 16 weeks maintained completely clear skin through one year. We look forward to seeing more of the two-year data from the IMMhance study at the World Congress of Dermatology in June.”

The duration of response was also impressive. Fifty percent of subjects who obtained a PASI 90 at week 28 with the last dose given at week 16 were able to maintain PASI 90 out until week 52—nine months after their final dose. If a patient is 90 percent improved and has to stop treatment, there is 50 percent rate of maintaining response for nine months with risankizumab.

The IL-23 monoclonal antibodies are the most recent generation of psoriasis therapies. The first, guselkumab (Tremfya, Janssen) is administered at weeks 0, 4, and then every eight weeks. Tildrakizumab (Ilumya, Sun Dermatology) is administered in the same manner as risankizumab (week 0, 4 and every 12 weeks). All three have good efficacy, but risankizumab has a faster onset of action.

In addition, I have considered ustekinumab to be one of the safest biologic agents; when risankizumab went head-to-head with this drug, the adverse event profile was similar. Hence, risankizumab was twice as effective and the safety was equal.

As with all new therapies, more data will be accrued to determine both long-term safety and durability, but from the look of phase 3 data, risankizumab will clearly up the number of psoriatic patients that we can help.