A 40-year-old otherwise healthy woman presented to our dermatology clinic with a chief complaint of a “cyst.” She reported a four-year history of this non-tender lesion on her left forearm. It had rapidly enlarged within the past year, which she attributed to trauma that occurred when she slammed the lesion in a car door several months prior. The lesion occasionally bled and had foul smelling drainage. She denied weight loss, fevers, night sweats, limb weakness, or limb numbness.

Physical examination revealed a 27x21.5cm firm non-pulsatile erythematous tumor with overlying crust located on the left ulnar forearm. Radial pulses were present bilaterally with brisk capillary refill. She had intact flexion and extension at the elbow. Due to the size of the lesion, biopsy was deferred and patient was sent for imaging. CT scan demonstrated a necrotic heterogeneous soft tissue mass with superficial ulceration at the left ulnar forearm. MRI revealed a soft tissue mass infiltrating into the muscle and in contact with ulnar periosteum. She was referred to an orthopedic surgeon who performed an incisional biopsy for pathologic analysis.

Our patient had a complicated medical course. She initially underwent surgical excision and reconstruction, however subsequently failed two free flaps secondary to thrombosis. During this time, she was also treated for osteomyelitis from Pseudomonas stutzeri. She was then found to have left-sided axillary lymphadenopathy at a follow-up appointment. Therefore, she underwent a repeat CT scan, which revealed multiple clustered left sided axillary lymph nodes, asymmetric in regards to the right axilla. However, an ultrasound guided lymph node biopsy of this area was negative for metastatic disease. Histopathological analysis revealed negative surgical margins. She completed adjuvant radiation treatment with high dose iridium-192 brachytherapy, and is currently recovering from a pedicled deep inferior epigastric perforator flap. 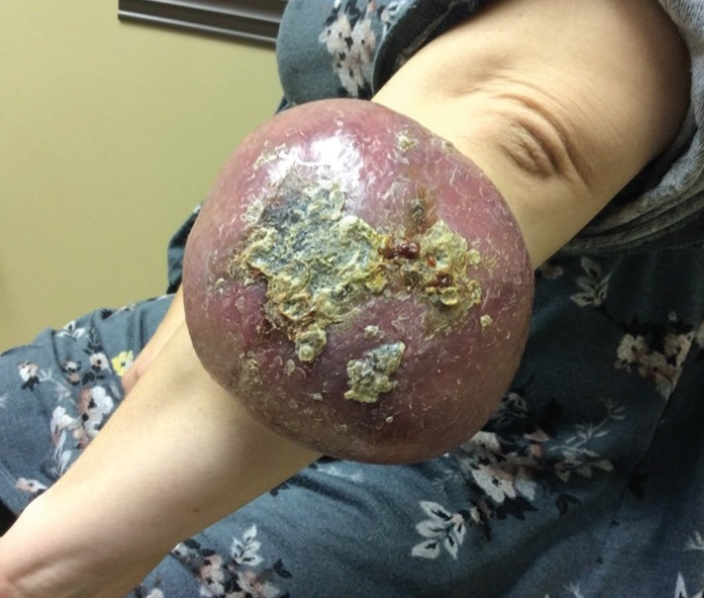 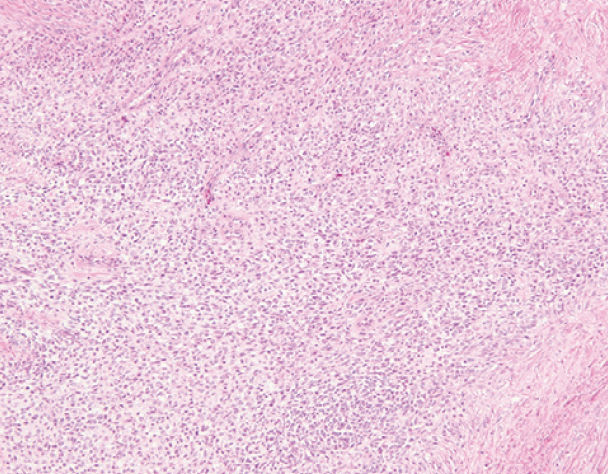 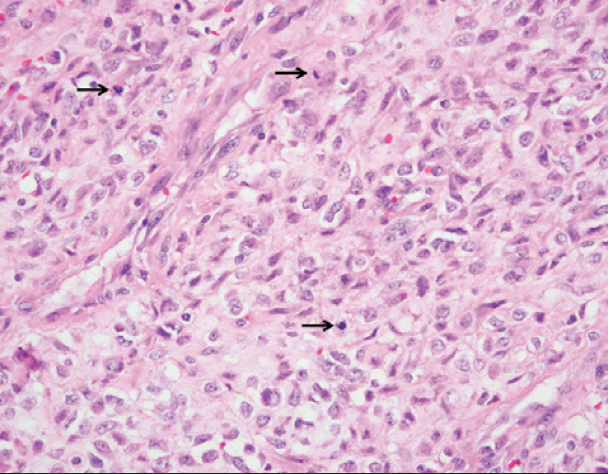 Synovial sarcomas are an aggressive type of sarcoma, constituting approximately 10 percent of all soft tissue sarcomas, though not commonly diagnosed in the dermatology office. They are most common on the extremities, and patients have a mean age of 30 years at diagnosis.2 Although synovial sarcomas are typically localized at the time of diagnosis, they metastasize more frequently to the lungs, lymph nodes, and bone than do other soft tissue sarcomas.2,3 While one-third of patients will have associated pain, rapid enlargement is the most common symptom.2 Independent predictors of metastatic disease for synovial type sarcomas are tumors that are greater than 5cm at diagnosis and tumor invasion in bone, vasculature, or neural structures, both of which were present in our patient.4 Fortunately, it is the exception that synovial sarcomas present as large in size as in our patient. Most patients present to their primary care physician or their dermatologist with only a subtle soft tissue swelling.2 Due to the aggressive nature of soft tissue sarcomas, such as the synovial type, it is important to consider this tumor as part of the differential diagnosis and ensure histopathologic analysis for any changing subcutaneous nodule or tumor.

Have an interesting case to share? Practical Dermatology® is seeking submissions for the Resident Resource Center. A panel of physician editors will select a best paper for the year.

The winner will be recognized in Practical Dermatology® magazine and PracticalDermatology.com and receive a reward of a $200 American Express gift card.

Elizabeth Veasey, MD is a third-year dermatology resident at the University of Louisville.

A Closer Look at Skyrizi

AAD Survey: Parents Get the Importance of Sunscreen for their Kids