Psoriasis and Cancer: Is There a Link?

New data adds to the evidence for a link between psoriasis and certain cancers, including skin cancer.

The association of psoriasis with several common comorbidities, including heart disease and metabolic syndrome, has now been firmly established. Less clear has been an association of psoriasis with risk for cancers, including skin cancers. One study published online in JAAD found that patients with psoriasis have an increased risk of mortality and showed that the risk is mediated, at least in part, by an increased prevalence of cardiovascular, infectious, and neoplastic disorders.1 A 2013 meta-analysis of epidemiological data identified an increased risk of squamous cell carcinoma (SCC) and basal cell carcinoma (BCC) in patients with psoriasis but did not identify increased melanoma risk.2

Earlier this year, a group of dermatologists from Australia and New Zealand addressed an increased incidence of cancers in patients with psoriasis, citing impaired immune surveillance, immune modulatory treatments, chronic inflammation and/or co-risk factors, such as obesity, as potential contributors to the risk.3 Further complicating the picture is research showing that patients with psoriasis are more likely to engage in behaviors that increase the risk for cancer, such as smoking, drinking, and being overweight. The latest data on cancer and psoriasis, from a meta-analysis of 58 studies, supports the association between psoriasis and increased risk of skin cancer.4 This appears to be the first meta-analysis of cancer risk in psoriasis that was stratified by disease severity and examined the risk of cancer mortality in this group.

Perhaps indicative of the complexity of the research, the 58 studies included in the latest analysis were selected from a total of 2,302 studies available.4 Researchers for this meta-analysis limited their review to cohort or case-control studies with at least one group of patients with psoriasis and either a comparison group of those without psoriasis or the general population.

The available data were sufficient to power a meta-analysis for 22 site-specific cancers in patients with severe psoriasis. Eight cancer sites/types were shown to have a significantly elevated risk in this group: squamous cell carcinoma, lymphoma, basal cell carcinoma, keratinocyte, esophagus, liver, pancreas, and bladder.

While there appeared to be no increased risk for cancer mortality overall among psoriasis patients, among patients with severe psoriasis there was increased mortality associated with cancers of the esophagus, liver, and pancreas.

By nature of the study as a meta-analysis, it is difficult to control for factors other than psoriasis diagnosis that may contribute to cancer risks. The researchers attempted to provide as level a field for comparison as possible through their selection of studies for inclusion. Some of the studies included in the analysis controlled for UV index, which is helpful. Other studies in the analysis, however, included patients who received PUVA treatment for psoriasis. Phototherapy has been shown to increase the risk of skin cancers. Data have shown that exposure to more than 350 PUVA treatments significantly increases the risk of SCC, although high-dose exposure to PUVA does not seem to increase BCC risk.5 Prospective studies have shown PUVA-treated patients have an increased risk of melanoma.6

When considering the apparent increase in SCC risk in psoriasis patients, the previously cited researchers from Australia and New Zealand noted that increased risk for SCC may be attributable to exposure to PUVA and/or cyclosporin. They also point out that the biologic therapies used to treat moderate to severe psoriasis are independently associated with a slightly increased risk of cancer (much lower than the risk with cyclosporine), but the risk of cancer from low-dose methotrexate appears minimal.3

Further study of the link between psoriasis and cancer are needed. As dermatologists, we may be particularly interested in the apparent increased risk for skin cancers. Results of the recent meta-analysis have at least two important implications for dermatologists currently. One, as discussion of comorbidities and a focus on overall health becomes increasingly part of our care of patients with psoriasis, it may be appropriate to address risk for cancer. Without causing patients undue alarm, it may be beneficial to alert them that the risk exists and urge them to be vigilant for any symptoms that may warrant evaluation by an appropriate physician.

As experts in the diagnosis and management of skin disease, it is also incumbent on us to urge UV safety in our psoriasis patients and to provide skin exams on at least an annual basis. We should question patients about known risk factors for skin cancer, including medications and UV exposure, and counsel them to seek immediate assessment of any suspicious lesions. The data to date do not seem to suggest that patients with psoriasis have an increased risk for mortality from skin cancers, therefore, it seems that early detection and treatment can be just as effective in this patient group as in the general population.

1. Semenov YR, Herbosa CM, Rogers AT, Huang A, Kwatra SG, Cohen B, Anadkat MJ, Silverberg JI. Psoriasis and Mortality in the US: Data from the National Health and Nutrition Examination Survey. J Am Acad Dermatol. 2019 Aug 12

4. Trafford AM, Parisi R, Kontopantelis E, Griffiths CEM, Ashcroft DM. Association of Psoriasis With the Risk of Developing or Dying of Cancer: A Systematic Review and Meta-analysis. JAMA Dermatol. 2019 Oct 16.

Blinded by the Light—and More 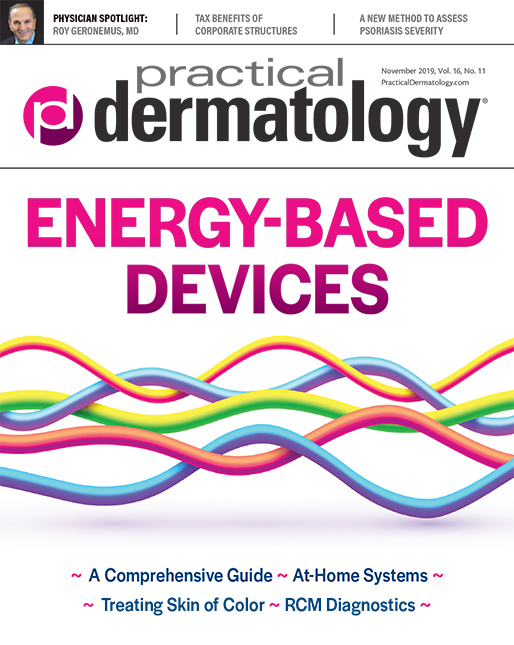