Dermatologists tend to think of the skin as the interface between the body’s internal systems and the outside world. However, the digestive tract also is an important connection between the body’s internal environment and the external environment. Beyond nutrient assimilation and elimination pathways, the digestive tract is home to a complex and diverse ecosystem: the gut microbiome. The intricate relationship of the surrounding enteric nervous system (also described as the second brain), the neuroendocrine-hypothalamic-pituitary-adrenal axis, the gut immune system (GALT), and the intestinal mucosal barrier1 ultimately connects the digestive system to many other body systems, including hair. Accordingly, the integrity of the gut microbiome is critical for optimal total-body well-being.

Threats to a healthy gut microbiome include stress, frequent antibiotic use, poor diet, and other behaviors. Antibiotic overuse, societal obsession with “germ” avoidance, and use of diet and grooming products antithetical to fostering commensal bacteria have all been cited as potential contributors to the trend for decreased microbial diversity in adults. Many studies have compared the microbial content of adults living in developed countries with that of adults living in areas with restricted access to western medicine and commercial agricultural practices.2 A dysbiotic microbiome may not efficiently perform functions vital to regulation of the hair cycle, such as supplying nutrients, synthesizing certain vitamins, and regulating aspects of the immune system.2 Alterations to the microbiome have the potential for permanence, compromising function and aiding development of myriad health problems, including potentially hair loss.3,4 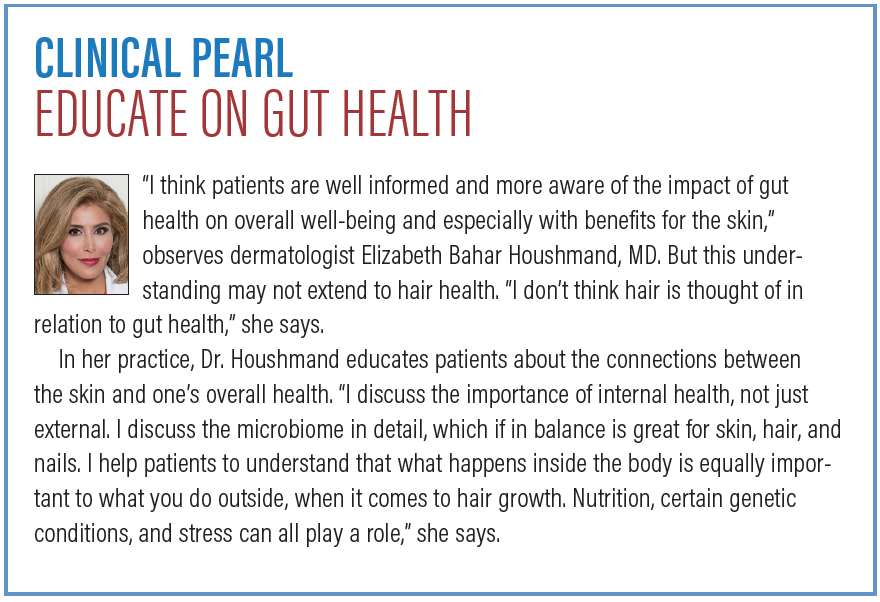 Stress can induce microbial shifts, contributing to an erratic dysbiotic state in the gut. Behavior of the microbiome was predictable amongst individuals reporting no psychological or physical stress, but for those under stress, highly variable responses were elicited.5 The relationship between gut and stress is bi-directional. Stress not only influences the microbiota directly, but sends signals to and from the nervous system through the vagus nerve, further damaging the integrity of the microbiome. Over-activation of this nerve can deplete beneficial gut bacteria.6 Dysfunction in vagal tone, partly due to chronic stress, has been shown to lead to a multitude of gastrointestinal issues, such as IBS, which we understand to have some overlapping pathways in the pathogenesis of hair thinning and loss.7

Evolving indicators suggest a connection between gut health and hair growth that remains to be proven. For example, when two refractory alopecia universalis patients underwent fecal-matter transplant (FMT) for recurrent Clostridium difficile infection (CDI), they experienced subsequent hair regrowth. This suggests gut flora composition may be associated with immune conditions and, to our interest, those conditions with hair loss.8 An assessment of both cases—including the fact that both patients had unsuccessfully tried several different treatments for hair loss—suggests a connection between the microbiome and its ability to modulate the immune system, most importantly immune mediated cytokines, shown to affect the status of hair growth.

Gut Permeability. Dysbiosis of the gut microbiome can increase intestinal permeability changes,4 including decreased expression of tight junction proteins and increased activation of immune mediated cells.9 Downstream effects of a disordered gut barrier may contribute to the multifactorial etiology of hair loss. For example, disruption to epithelial homeostasis increases permeability of lipopolysaccharides (LPS) produced from gram negative bacteria. LPS in circulation can cause low grade system-wide inflammation, a known growth cycle disrupting pathway.4 In addition to system-wide inflammation and immune dysregulation, exogenous and endogenous toxins are able to disrupt the gut flora, transverse the gut barrier, and expose the hepatic system to cellular damage and metabolic overload, which is also tied to hair loss.4 The range of disorders implicated from these etiologies clearly indicates that each system in the body may be targeted, including the microsystem of the hair follicle.10 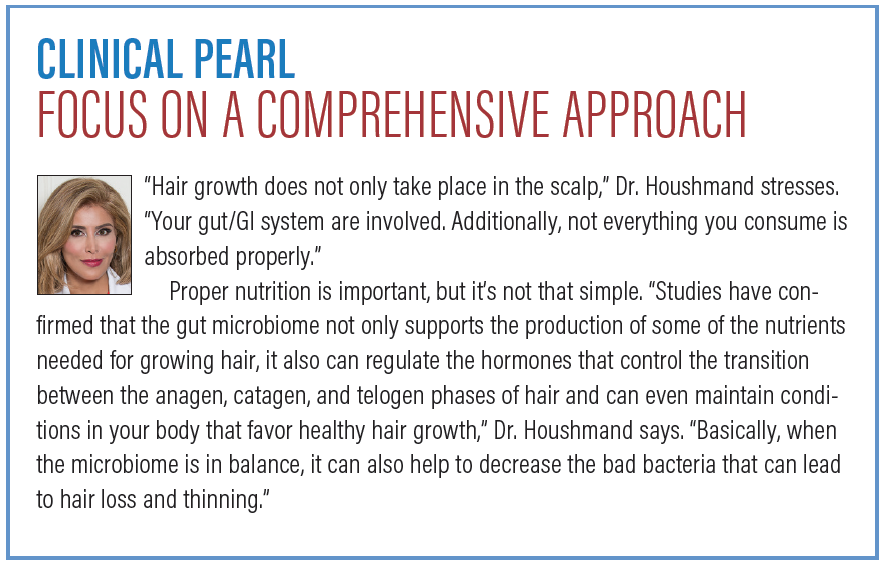 Gut Inflammation. A healthy, diverse microbiome helps regulate peripheral immune responses in the gut, preventing system-wide spread of inflammation. However, overgrowth or imbalance of commensal and pathogenic bacteria perturbs the balance between pro- and anti-inflammatory cytokines. The shift in mucosal pro-inflammatory mediators leads to disrupted epithelial integrity, disrupted neuroendocrine signaling, and over- or under-neurotransmission of the vagus nerve, a component responsible for stress responsiveness.6 High mucosal levels of IFN-γ>, TNF-α, IL-6, IL-22, and IL-17 are commonly reported in people with intestinal dysbiosis and various bowel diseases. TNF-α, specifically potentiates an inflammatory state in the gut, delaying gastric emptying and disrupting colonic transit time, leading to a variety of clinical GI symptoms.11 Simultaneously, when there is a breakdown in epithelial permeability, these pro-inflammatory mediators contribute to the cascade of inflammation elsewhere in the body—including the hair follicle. Research suggests an interconnectedness of inflammation and the destruction of hair follicle immune privilege, premature catagen induction, regression, and hair growth arrest. This supports the proposition that controlling the source of inflammation emanating from the gut can reduce the expression of inflammation in the hair follicle itself.12,13

Malabsorption. Healthy hair fiber composition is specifically reliant on amino acid metabolism, requiring proper macronutrient breakdown in the digestive tract by innate digestive proteolytic enzymes and the assistance of gut microbiota. Additionally, enterocyte-absorbed micronutrients are essential for maintenance and metabolism in the follicle and for system-wide support. Deficiencies of micronutrients (zinc, iron, selenium, biotin, niacin, copper, Vitamins A, C, D, and E,) is associated with hair structural changes and/or hair loss and are, in part, tied to gut health status.14,15 The microbiome ferments carbohydrates to short chain fatty acids (SCFAs) that serve as energy for enterocytes and also gut motility and nutrient absorption regulation via G-coupled protein receptors (GCPR).16 These G-coupled protein receptors are responsible for regulation of nutrient assimilation in the gut. For example, the microbiome of iron deficient individuals reflects reduced lactobacillus species. While absorption primarily occurs in the small intestine, there are also enterocyte transporters in the colon involved in mineral transport of iron. This transport is subject to regulation by bacteria and their byproducts. This may help explain that a disrupted microbiome is a component to the etiology of nutritional deficiency syndromes.17 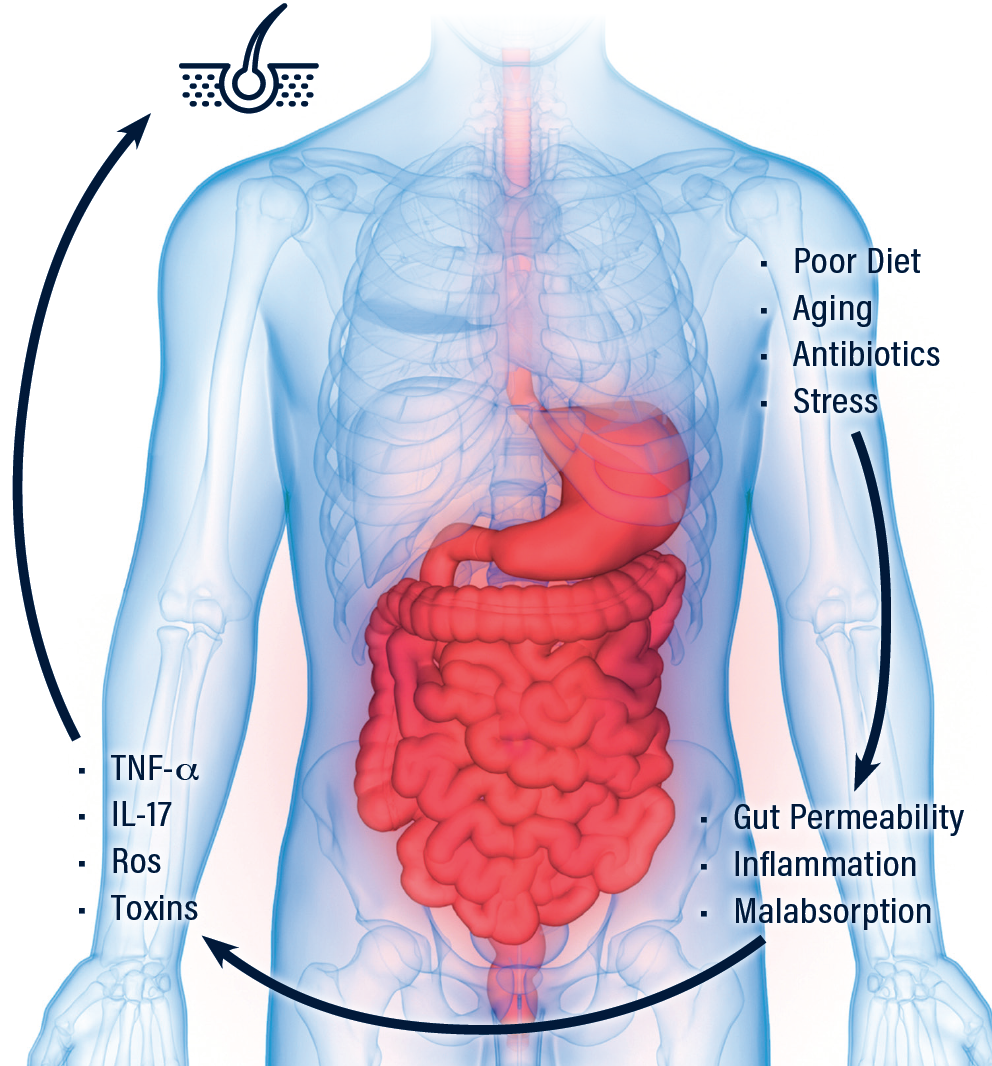 Gut function influences the overall load of inflammation, toxic exposure, and nutritional status in the body—each affecting the micro-environment and function of the hair follicle. Changes in these processes lead to perifollicular oxidative damage, negative alterations in growth cycle phases, and a lower quality functioning of dermal papilla cells.

Nutrafol®’s Hairbiotic has been formulated to optimize the gut microbiome and support the pathways proposed as the gut-hair connection. The intent is to prevent system-wide inflammatory responses caused by stress or other etiologies, strengthen gut epithelial lining, and optimize nutrient absorption in the digestive system. Hairbiotic contains 20 billion colony forming units (CFU) from seven prominent strains involved in dermatology, stress responsiveness, and immune system control.

Lactobacillus reuteri. Supp-lementation in a mouse model demonstrated improved hair quality, resulting in thick lustrous fur through interactions with IL-10 and IL-17. In humans, L. reuteri also has been shown to attenuate expression of pro-inflammatory gut cytokines decreasing TNF-α to mitigate an inflammatory cascade throughout the body.18,19 IL-17 is implicated in various inflammatory diseases through induction of chemokines that recruit neutrophils and monocytes.18-20 It is thought that an increase in IL-17 subverts scalp hair growth, and it thereby becomes a prime target of anti-inflammatory therapies.

Lactobacillus rhamnosus GG. L. rhamnosus GG have been shown to have anti-inflammatory effects system wide but plays an important role in protection of the intestinal lining. At the cellular level, it stimulates production of cytoprotective shock proteins, preventing apoptosis and promoting cell growth.21

Lactobacillus helveticus. Daily administration of L. helveticus for 30 days decreased urinary free cortisol in human subjects under daily stressful life events, thereby contributing to the balance and control of the stress hormone in the hair follicle.22

Bacteriophage Prebiotic. A patented bacteriophage (proprietary combination of viruses) acts as an unconventional and innovative prebiotic. A bacteriophage works primarily to target and destroy undesirable commensal bacteria, which release their cellular components for beneficial bacteria to consume and grow.23,24 Both in vitro and in vivo tests have demonstrated the growth promoting effects of bacteriophage technology on multiple diverse bacterial strains. In humans, bacteriophage’s were shown to affect microbial populations and to positively influence the host immune response.23-25 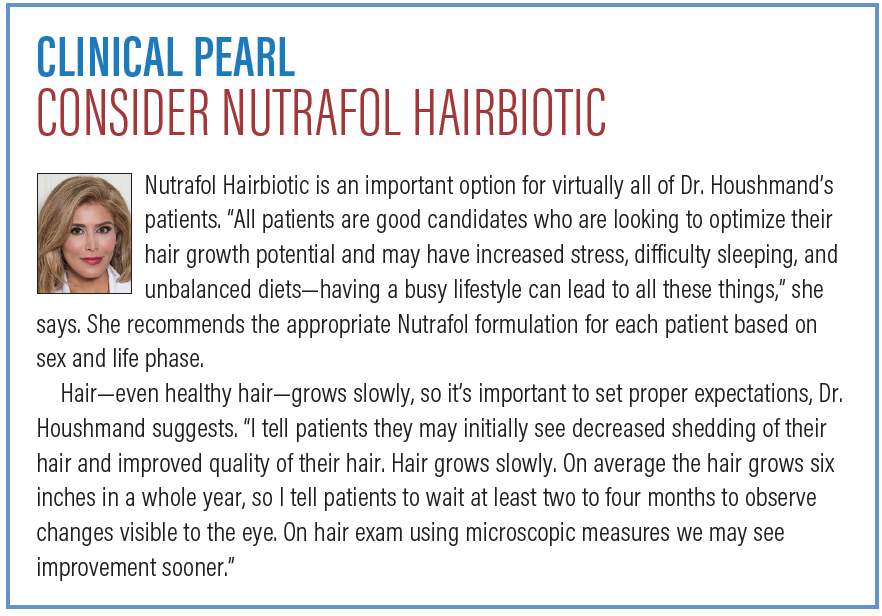 Hair loss has a multifactorial etiology, with prominence of elevated inflammatory cytokines disrupting the growth cycle and the follicles’ surrounding immune system. It is important to address inflammation and its origins—commonly associated and initiated within the digestive tract. From the functional medicine clinical perspective, much of disease starts and ends in the gut. The gut is a strong and impactful system tied to multiple chronic conditions, including hair thinning and loss. Optimizing gut health facilitates change systemwide; as such, it helps to develop necessary foundations tied to hair health. Therapeutic opportunities, in addition to pre- and probiotic support, include dietary modification, environmental intervention, and stress management.

2. Langdon A, Crook N, Dantas G. The effects of antibiotics on the microbiome throughout development and alternative approaches for therapeutic modulation. Genome Med. 2016;8(1):39. 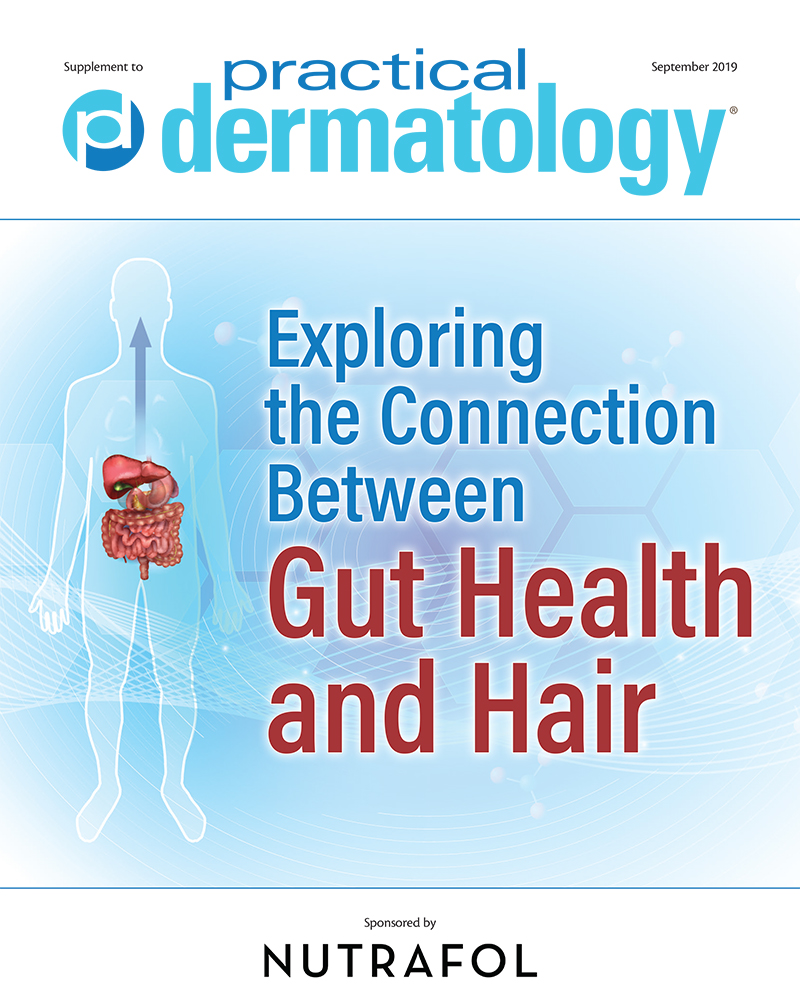