Phase 2 and 3 Trials of JAK Inhibitors For Atopic Dermatitis: A Review

A number of drugs in development show promise for one of the most challening skin diseases.

Atopic dermatitis (AD) is a chronic inflammatory skin condition that affects approximately 12 percent of children in the US and 7.2 percent of adults in the US.1 Given the large and increasing prevalence of AD, the associated public health and economic burden is significant. AD costs $5 billion annually in both direct costs (hospitalizations, prescription medications, transportation, and visits to health care providers) and indirect costs (reduced quality of life, missed days, lost productivity at work or school, and career modification).2 In an effort to reduce disease burden, researchers continue to develop new therapies, such as biologic agents, for the treatment of uncontrolled AD. 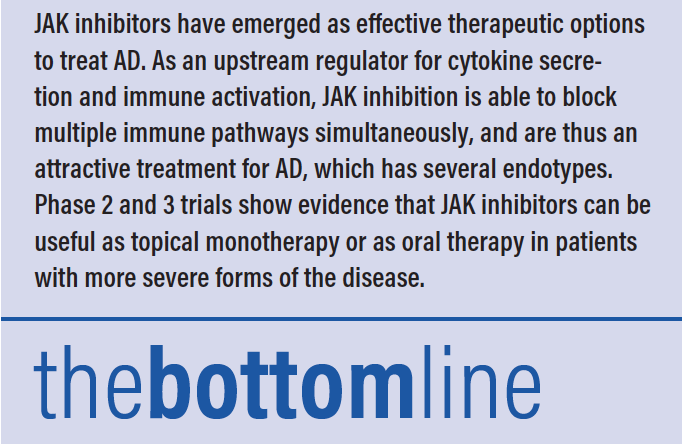 AD is a heterogeneous disease that arises through a combination of genetic, environmental, and immunological factors. Disruption of the skin barrier, often via loss-of-function mutations in filaggrin, have been shown to be the strongest genetic association to the disease, with 10 percent of Europeans having mutations in the gene.3,4 Filaggrin, serves to aggregate keratin and enhance the formation of corneocytes, eventually being broken down into amino acids that act as natural moisturizing factors in the stratum corneum.4 Other etiologic factors include a strong Th2 immune predominance, abnormal cytokine profiles, and cutaneous dysbiosis.

Janus kinase (JAK) is a family of intracellular signaling molecules that use cytokine-mediated signals via the JAK-STAT pathway. JAK-STAT signaling involves binding of a ligand to a cell surface receptor, causing the JAK molecules to phosphorylate the receptor with subsequent dimerization of the STAT molecules, which act as transcription factors that enter the nucleus and induce DNA transcription. The JAK-STAT pathway has numerous physiologic roles, and many of its ligands are cytokines, such as interferons and interleukins, allowing the pathway to act as a “central communication node” for the immune system.5 There are four JAK receptors and seven STAT proteins, with 40 different cytokines that signal through various combinations of the two families.6 Clinically, mutations in the JAK-STAT pathway often present as immunologic and hematologic disease, such as SCID, lymphoma, psoriasis, and AD. Cutaneous manifestations of JAK-STAT mutations include psoriasis, alopecia, and AD.7 Multiple immunological pathways have been implicated in the development of AD, including Th2, Th22, Th17, and sometimes Th1activation.8 Because of its ubiquitous role in the immune system, JAK inhibitors offer a single pharmacologic target for inhibition of multiple immunological communication pathways. Due to its role in the immune system and hematopoiesis, JAK inhibitors have previously been documented to cause dose-dependent anemia, thrombocytopenia, and neutropenia.

The purpose of this review is to summarize the current understanding of JAK physiology as it pertains to dermatology and review the major JAK inhibitors that are currently in trial for the treatment of atopic dermatitis.

Upadacitinib. Upadacitinib (ABT-494 or Rinvoq, Abbvie) is a second generation oral JAK inhibitor that selectively binds and inhibits the activity of JAK1. The drug was approved in 2019 to treat rheumatoid arthritis. Results from a 32-week Phase 2b randomized, placebo-controlled study in adult patients with moderate to severe AD showed that once-daily upadacitinib had a mean percent improvement from baseline Eczema Area and Severity Index (EASI) score of 48/44/69 percent for the 7.5/15/30mg doses, respectively, compared to 34 percent for patients receiving placebo.9 Notably, for patients who received placebo in Period 1 and were re-randomized to receive the upadacitinib 30mg dose in Period 2, the mean percent improvement from baseline in the EASI score was 97 percent at week 32. In addition to improvement in EASI, patients who received the higher 30mg dose reported a reduction in pruritus and improvements in sleep. During the study, two serious adverse events were noted in the placebo group that was re-randomized to receive upadacitinib 30mg (non-melanoma skin cancer and serious infection). As of August 2018, Phase 3 clinical studies are ongoing to further evaluate the safety and efficacy of upadacitinib in adults with moderate-to-severe AD, with a completion date estimated for August 2022.

Baricitinib. Baricitinib (Olumiant, Lilly) is a first generation oral JAK inhibitor with selectivity for JAK 1 and JAK 2. While considered non-selective, it has been shown to have greater inhibitory effect on JAK1/2.10 The drug was approved by the FDA in 2018 for the treatment of moderate-severe rheumatoid arthritis. In two Phase 3 clinical trials, BREEZE-AD1 and BREEZE-AD2, the safety and efficacy of baricitinib monotherapy was assessed over 16 weeks in patients with moderate to severe AD. In both investigational studies, baricitinib met the primary endpoint at week 16, defined by the Investigator’s Global Assessment (IGA) score for AD, of clear (IGA 0) or almost clear (IGA 1).11 Results from another randomized, 16-week, double-blind, placebo-controlled study assessing the efficacy and safety of combination baricitinib and adjunctive topical corticosteroid (TCS) treatment in patients with moderate to severe AD showed significant improvement in disease severity.12 At week 16, patients on baricitinib 2mg plus topical corticosteroids (TCS) or 4mg plus TCS achieved a reduction of approximately 65 percent in disease severity (based on EASI score), compared to a 46 percent reduction in the placebo plus TCS group. Patients in the active treatment group had statistically significant reductions in itch and sleep disturbance achieved by week 1 of treatment, which continued throughout treatment. During the study, patients on baricitinib used approximately 30 percent less TCS (by weight) than patients receiving placebo.

Lastly, BREEZE-AD7 is a recently completed Phase 3 study that assessed the combination of baricitinib with topical corticosteroids in adult patients with moderate to severe AD. The study found that patients had a significant improvement in symptoms (measured by IGA and EASI) at 16 weeks, compared with placebo. The incidence of treatment related adverse events was similar in the treatment and placebo groups, with no thrombotic events, major cardiovascular events or deaths reported.

Abrocitinib. Abrocitinib (PF-04965842) is a second generation oral JAK1 inhibitor that is currently in development by Pfizer. Results from a Phase 2b, randomized, double-blinded, placebo-controlled, parallel-group trial released in October 2019 concluded that once-daily oral abrocitinib was effective and well tolerated for short-term use in adults with moderate to severe AD.13 In the study, participants were randomly assigned 1:1:1:1:1 to receive abrocitinib (200mg, 100mg, 30mg, or 10mg) or placebo once daily for 12 weeks and the following endpoints were measured: the proportion of patients who achieved an IGA score of clear (0) or almost clear (1) and EASI score. The study showed that at the primary endpoint, significantly greater proportions of patients achieved IGA scores of clear or almost clear with improvement of 2 grades or more in both the 200mg and the 100mg dose groups, compared with placebo. At week 12, only the 100 and 200mg dose were able to achieve significant reductions of EASI, with the effect peaking at four to six weeks and maintaining thereafter.

In two Phase 3 trials, JADE MONO-1 and JADE MONO-2, abrocitinib was able to meet the study’s primary endpoints: an IGA score of clear (0) or almost clear (1) skin and two-point or greater improvement relative to baseline and a 75 percent or greater change from baseline in EASI score.14 The most commonly reported treatment-emergent adverse events (TEAEs) included diarrhea, nausea, viral upper respiratory tract infection, headache, and dermatitis. Among the TEAEs, only gastrointestinal disorders were reported substantially more often for patients receiving abrocitinib than those receiving placebo. There was also a dose-dependent change in platelet count in doses above 10mg, but only two of 266 patients (0.8%) in a Phase 2b trial had platelet counts less than 100×103/μL.13

Ruxolitinib. Ruxolitinib, (Jakafi, Incyte/Pfizer), is a second generation topical JAK inhibitor that is selective for JAK1 and JAK2. In September 2018, Incyte announced positive Phase 2b results in a randomized, dose-ranging, vehicle- and active trial for the ruxolitinib cream in AD patients who were candidates for topical therapy. The TRuE-AD clinical trial program includes several Phase 2b and Phase 3 trials that evaluate the safety and efficacy of ruxolitinib cream in patients with AD. The Phase 2b trial included 307 adult patients and met its primary and secondary endpoints, which were significant improvement from baseline in EASI score, and reduced itch compared to vehicle.17 At week 4, 71.6 percent of patients had significantly improved EASI score in the treatment group (1.5% in the BID group) vs. 15.5 percent improvement in the non-active vehicle with a P<0.0001.The medication also showed superiority against active control at week four (71.6 percent vs. 59.8 percent improvement), a secondary endpoint. Additionally, reductions in itch numerical rating scale (NRS) score were observed as early as within two days of the initiation of therapy (ruxolitinib cream 1.5% BID vs. vehicle, -1.8 vs. -0.2; P<0.0001), with a greater reduction in itch with ruxolitinib cream 1.5% BID and QD than with triamcinolone cream 0.1% BID. In December 2018, Pfizer announced that they had enrolled their first patient in a series of Phase 3 trials for ruxolitinib, which are estimated to be completed in 2020. Ruxolitinib cream was and was not associated with clinically significant application site reactions. 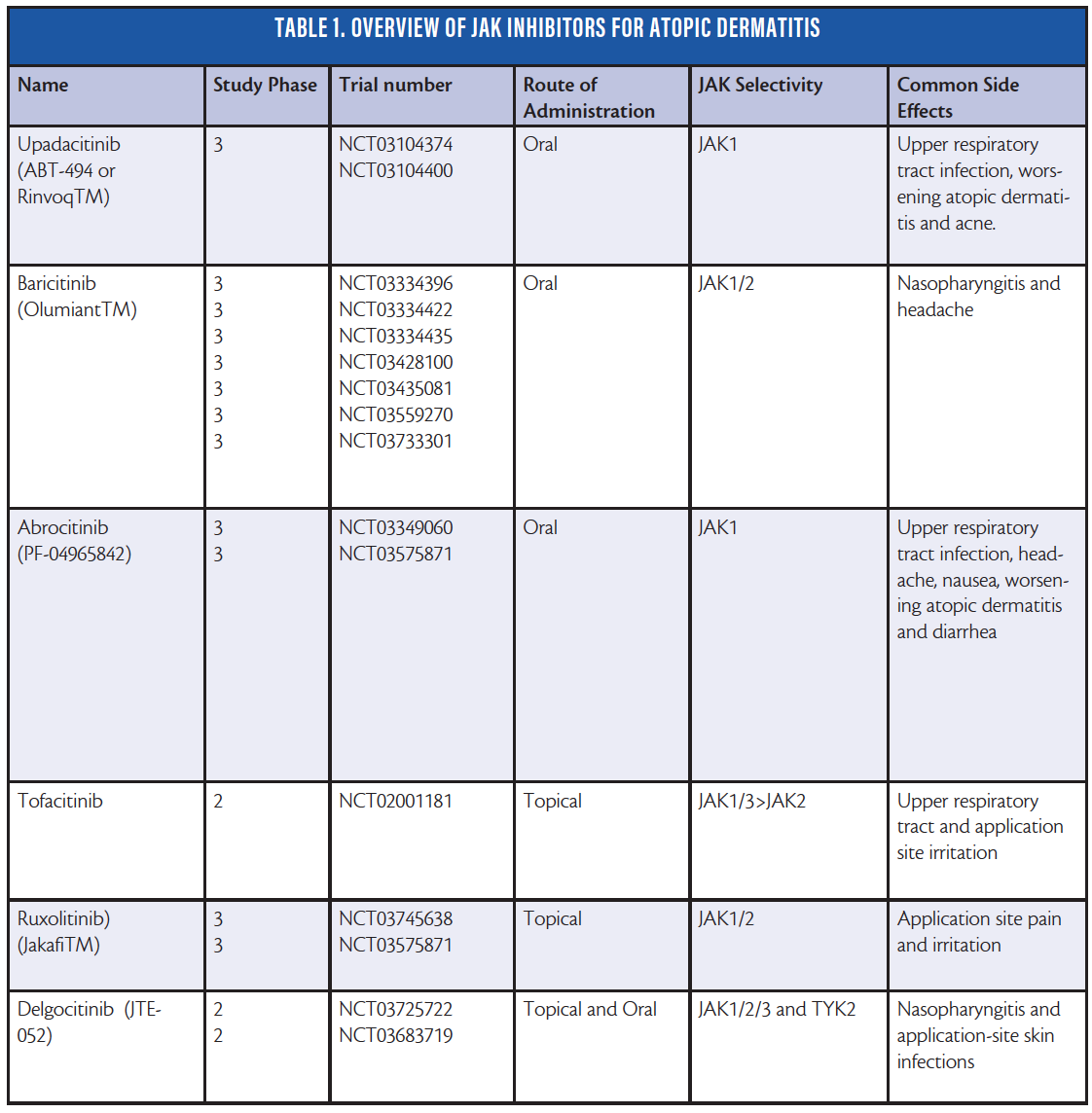 Delgocitinib. Delgocitinib (JTE-052) is a novel pan-JAK inhibitor that inhibits JAK1,2,3 and TYK2. The drug is currently in trials in both Japan and the United States for the treatment of AD. In March 2019, drug manufacturer Torri and Japan tobacco announced preliminary results from a phase 3 trial of the medication. This randomized, double-blind, vehicle-controlled study compared the safety and efficacy of topical 0.5% delgocitinib ointment to vehicle in patients with moderate-to-severe AD. Patients receiving delgocitinib had a significant effect improvement in their baseline modified Eczema Area and Severity Index (mEASI) compared to patients receiving only vehicle (-44.3 percent vs 1.75 percent). Another randomized, double-blind, parallel group, vehicle-controlled Phase 2a study assessed the efficacy of delgocitinib in pediatric patients with AD. The study randomized patients in a 1:1:1 ratio to receive 0.25% or 0.5% topical delgocitinib ointment or vehicle ointment twice daily for four weeks. Results showed that both active treatment groups were superior to placebo, with improvement seen in mEASI score (-54 vs -62 vs -4.8) in the 0.25%, 0.50%, and placebo treated groups, respectively. Reported side effects were mild and most commonly involved treatment site irritation/infection or upper respiratory infection (nasopharyngitis).

JAK inhibitors have emerged as effective therapeutic options to treat AD. As an upstream regulator for cytokine secretion and immune activation, JAK inhibitors are able to inhibit multiple immune pathways simultaneously, and are thus an attractive treatment for AD, which has several endotypes.18 For patients that are candidates, Phase 2 and 3 trials show evidence that JAK inhibitors can be useful as topical monotherapy or as oral therapy in patients with more severe forms of the disease. In particular, the four medications reviewed in this article have demonstrated that the ability to significantly reduce both objective disease measures (EASI and IGA), and subjective symptoms such as itch. The most commonly reported TRAEs were nasopharyngitis, nausea, headache, and nausea. Dose-dependent neutropenia and thrombocytopenia are also possible due the role of the JAK-STAT pathway in hematopoiesis.

To learn more, consider attending the inaugural 2020 San Diego Dermatology Symposium from September 11-13, 2020 at the InterContinental San Diego where Dr. Wu will discuss this more in depth. sddermsymposium.org

17. Incyte. Incyte Announces Positive Data from Phase 2b Trial of Ruxolitinib Cream in Patients with Atopic Dermatitis. In. BUSINESS WIRE2018.

Facing Challenges: Adapting Practice in the Face of COVID-19 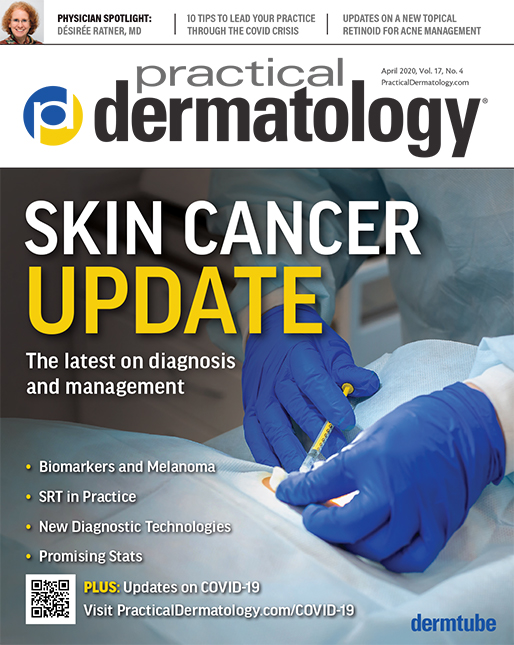 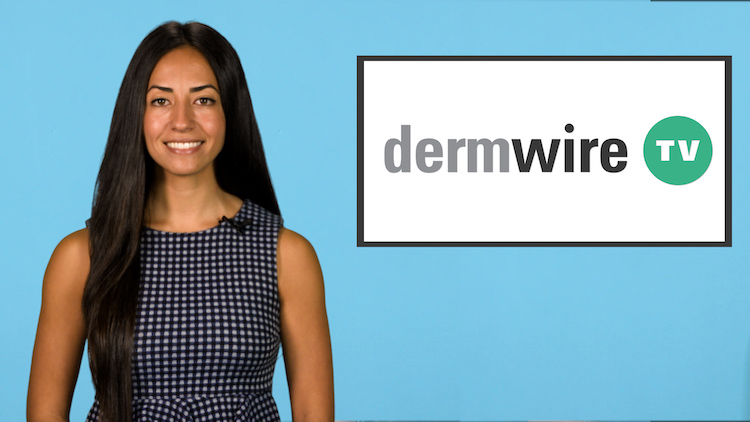