Psoriasis is a chronic immune-mediated inflammatory disease that can significantly affect a person’s quality of life and may be associated with serious comorbidities. Affecting more than 8 million Americans, psoriasis is characterized by erythematous papules and plaques covered with silvery scales. Multiple factors contribute to its etiology and pathogenesis, including genetics. It has been hypothesized that the disease starts with the activation of T cells by an unknown antigen, which leads to secretion of an array of cytokines, inflammatory cells, and keratinocytes.

Current treatment options include topical therapy, prescription phototherapy, systemic agents including biologic drugs. Patient compliance may be the largest barrier to successful treatment with topical therapies, especially when a large body surface area (BSA) is affected. Systemic agents including biologic drugs work by suppressing patient immune system thus during the treatment course patients may be more likely to get infections or certain diseases. Some groups of patients are not well suited for systemic drugs for this reason. High cost is also an important factor, especially for biologics. Phototherapy has been proven over years to work well for mild to moderate to psoriasis and it does not incur the side effects of systemic medications. Still, traditional methods of light box treatment including PUVA (photochemotherapy) treat the entire skin, so there may be an increased risk of skin cancer. Because of its efficacy and the fact that just psoriatic plaques are treated, the 308nm excimer laser is considered first-line phototherapy for topical plaque psoriasis. The efficacy and safety of this laser has been extensively evaluated for the treatment of psoriasis.

A recent clinical study demonstrated that Aerolase’s Neo® Elite 650microsecond 1064nm Laser offers equal efficacy vs. 308nm excimer laser in the treatment of mild to moderate psoriasis vulgaris. The study was completed at the Center for Clinical and Cosmetic Research in Aventura. The randomized, investigator-blinded, parallel-group study included 20 subjects with mild to moderate psoriasis vulgaris. All subjects were randomized to receive the 650microsecond, 1064nm YAG laser (LightPod Neo® Elite, Aerolase Corp.) and the 308nm excimer laser (XTRAC Velocity 400®, PhotoMedex, Inc.) treatments on psoriatic plaques located on either the right or left side of the sagittal axis of the body.

Based on these findings, Aerolase’s Neo Elite provides a highly effective treatment option. It targets the vasculature under the psoriatic plaque and this has shown to be efficacious in hard-to-treat areas. In addition, the Neo Elite can be used with other therapies for even greater efficacy.

Psoriasis treatment changed with the advent of the excimer laser because, for the first time, dermatologists were able to target specific areas of involved skin with narrow ultraviolet B light (UVB), allowing for considerably higher doses of UVB compared with traditional phototherapy. It also conferred a safety edge as the light dose of 308nm is emitted directly at the psoriasis plaques, reducing the risk of UV exposure.

Aerolase’s Neo Elite addresses inflammation and coagulates the blood vessels that feed the psoriatic plaques. This energy is highly attracted to hemoglobin, which is why it has the capability to deliver such powerful energy to these vessels. In addition, the laser light suppresses the inflammation.

The energy is delivered in a unique 650microsecond pulse duration for a highly tolerable treatment, even with multiple passes of laser energy across the affected area. This treatment breaks down the hyperactive microvasculature and cuts some of the blood supply to the psoriatic lesions. Neo Elite’s energy travels much deeper into the skin tissue than pulsed-dye lasers which were tried for treatment of psoriasis. As a result, it affects both superficial and deep plaque vasculature, yet is gentler to the skin with a substantially reduced risk of bruising as compared to pulsed-dye lasers.

As proven in the recent study, the Neo Elite and excimer lasers are equivalent in terms of efficacy. When we compared the efficacy and clearance of the Neo Elite with a 308nm excimer laser in the treatment of psoriatic plaques on trunks/limbs of subjects with mild to moderate psoriasis vulgaris, both treatments were also equally effective. In our study, patients underwent a maximum of 15 treatments or until full clearance was observed. Treatment visits occurred twice per week +/- 2 days (excluding weekends) for a maximum of eight weeks.

No adverse events (AEs) and serious adverse events (SAEs) were reported throughout the length of the study. Subjects’ discomfort sensation during treatment with the 650microsecond laser was slightly higher but did not appear to be clinically significant. Differences between the 650microsecond and excimer lasers were not significant for redness, thickness, scaliness, overall mPASI scores (arms and legs), and mPASI scores.

These findings are highly significant as no other laser has been shown to be as effective as the excimer until now. With that as the background, an advantage of Neo Elite is that this is not a UV laser. Its infrared 1064nm laser energy is clinically proven to be safe on skin tissue and is not associated with increased risks of skin aging and skin cancer linked to UV light.

The Neo Elite handpiece also does not contact the skin. This makes it a very sanitary treatment that is both easier and more convenient for the practitioner.

Separate from the clinical study, we have found that the Neo Elite is allowing for quick clearance on thicker skin areas. We were able to achieve significant clearance, even on recalcitrant cases of the hands and feet, in sometimes as few as two treatments.

The Neo Elite can be used with or without other psoriasis therapies to improve efficacy and time to clear. In a study, 34 patients with severe plaque psoriasis all received ustekinumab (Stelara) at weeks 0, 4, 16 and 28. After week 28, patients underwent eight laser treatments with the Neo Elite at 1-week intervals using energy of 25-28 J/cm2 with 3-4 passes. After six months of biological therapy alone, the average values of the indices were: PASI 75, BSA 8. After completion of laser therapy, the average value of the indices was: PASI 90-100, BSA 2-0, the study showed.

Before (left) and after treatment with the Neo.

The tolerability of treatment was high in this study. No side effects were observed. The authors concluded that the 650 Microsecond 1064nm laser therapy improved PASI and BSA scores after biologic therapy.

Reimbursement and Other Indications

The Neo Elite used for psoriasis can be reimbursed using the psoriasis laser codes 96920–96922. The codes are used depending on the BSA treated per individual treatment. Other clinical conditions for which Neo performs particularly well include: active acne and acne scars, melasma, rosacea and spider veins, rejuvenation, LHR and onychomycosis. Another important advantage of the Neo Elite laser is that it is safe for all skin types. Aerolase’s Neo Elite uniquely provides a safe, effective and tolerable treatment for psoriasis patients of all ages and skin types. 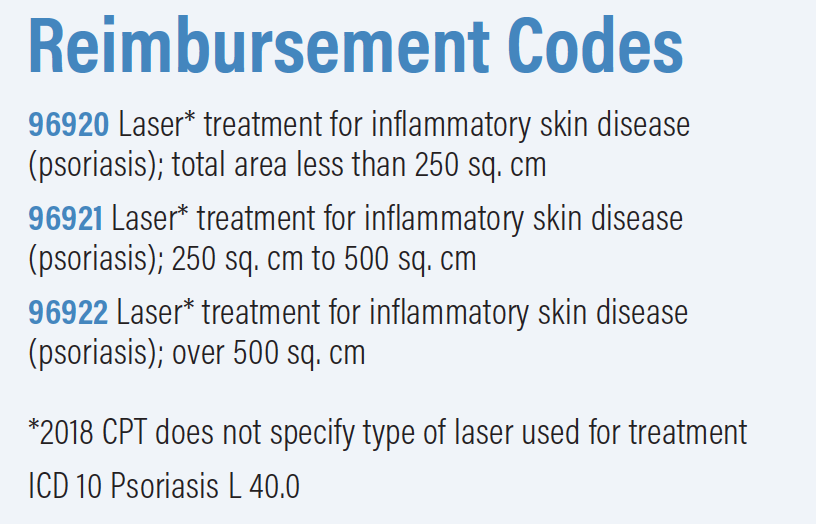 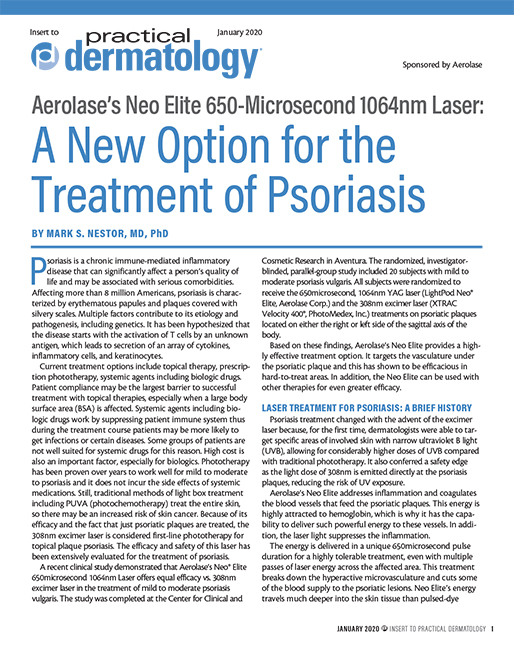