Although biologic medications have proven to be highly effective in the treatment of psoriasis, there remains a need for oral medications that offer similar success rates. Here’s a look in the pipeline.

Psoriasis is a chronic and relapsing systemic inflammatory disease that classically manifests as erythematous, well-demarcated plaques on the skin with overlying silver scale. The disease has a strong genetic basis, which displays a polygenic inheritance pattern.1 One study investigating inheritance patterns in psoriasis used genetic data from more than 39,000 patients and found that the disease was associated with 63 different susceptibility loci in European patients.2 Because there are multiple pathways involved in the pathogenesis of psoriasis, there is a wide array of potential therapeutic targets for the disease. 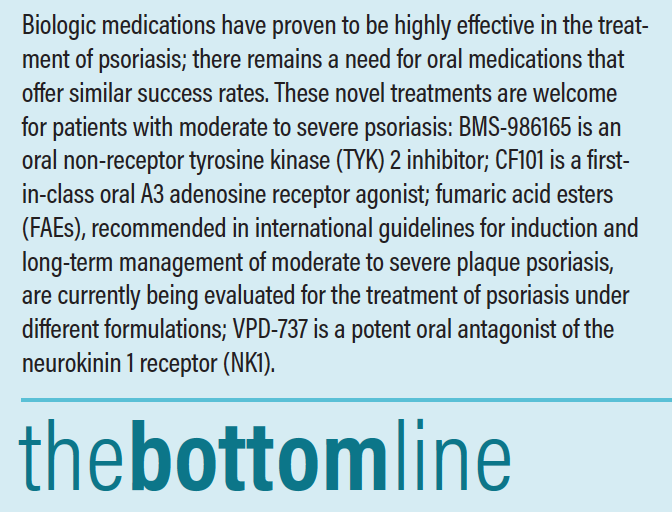 Phototherapy and topical medications have been shown to be effective in treating mild to moderate psoriasis for many patients, and recent advances have highlighted the role of targeted biologic treatments, particularly in cases of moderate to severe disease.3,4 TNF-α inhibitors, IL-12/23, IL-17, and IL-23 inhibitors have all proven to be highly effective in the treatment of psoriasis. However, biologic medication can be expensive, inconvenient (due to time and training to administer), and could expose the patient to small risks for infection and malignancy.4 Currently, safe and effective oral treatment options for psoriasis are limited. The development of novel oral medications with limited side effects is, therefore, critical and of the utmost importance for patients with moderate to severe disease.

BMS-986165. BMS-986165 is an oral non-receptor tyrosine kinase (TYK) 2 inhibitor currently in development by Bristol-Myers Squibb for the treatment of moderate to severe plaque psoriasis.5 TYK2 is a member of the Janus Kinase (JAK) family of intracellular signaling molecules. It acts as a signal transducer that transmits extracellular signals from membrane-bound ligands to intracellular ligands and activates intracellular STAT signaling molecules through phosphorylation and dimerization. Activation of STAT dimers leads to their nuclear translocation, where the dimers function as nuclear transcription factors. The JAK-STAT pathway is an integral pathway for the initiation, maintenance, and propagation of immune surveillance through the secretion of interleukins and cytokines.

Results from a Phase 2, double-blind trial of BMS-986165 in 267 adults with moderate to severe psoriasis showed at doses of 3mg daily and higher there was greater clearing of psoriasis than placebo over a period of 12 weeks. Patients were randomly assigned to receive the drug orally at a dose of 3mg every other day, 3mg daily, 3mg twice daily, 6mg twice daily, or 12mg daily or to receive placebo. The percentages of patients in whom at least PASI 50 was achieved by week 12 were 31 percent, 43 percent, 68 percent, 91 percent, 78 percent, and 89 percent, respectively. Patients receiving dosages of 3mg twice daily and higher attained normal or almost-normal quality of life as measured by DLQI. In this particular trial, response rates were similar to biologics, including ustekinumab (IL-23) and adalimumab (TNF-a). Treatment-related adverse events (TRAEs) were slightly higher in the treatment group than placebo and were most commonly nasopharyngitis, headache, diarrhea, nausea, and upper respiratory tract infection. One case of melanoma in situ was reported in the active treatment group (stage 0).

CF101. CF101 (Piclidenoson) is a first-in-class oral A3 adenosine receptor agonist currently in development by Can-Fite BioPharma for the treatment of patients with moderate to severe plaque psoriasis. The adenosine A3 receptor (A3 AR) is highly expressed in the immune system with evidence showing that it has a key role in regulation of neutrophil behavior, specifically inhibiting neutrophilic chemotaxis and oxidative burst.6 Overexpression of the A3 AR has previously been observed in auto-immune conditions, such as rheumatoid arthritis, Crohn’s disease, and psoriasis.7

In a Phase 2, multicenter, randomized, double-blind, placebo-controlled study, the drug was able to demonstrate significant benefit in controlling psoriasis symtoms.8 Seventy-five patients with moderate to severe plaque-type psoriasis were randomized to treatment with CF101 (1mg, 2mg, or 4mg) or placebo administered orally twice daily for 12 weeks. Interestingly, only the 2mg treatment group showed statistically significant benefit over placebo, with 35.5 percent of patients achieving a PASI ≥ 50, compared to 15.5 percent of patients in the placebo group. The 4mg treatment arm displayed less of a benefit than 2mg, and there was no benefit seen in patients receiving 1mg.

Results from this study are consistent with those of another Phase 2/3 multicenter, randomized, controlled trial assessing the efficacy of CF101 in patients with moderate to severe plaque psoriasis.9 In this study, 293 patients were randomized to receive either placebo or CF101(1mg or 2mg). The 1mg treatment group was discontinued due to non-response. The study did not meet the primary endpoint of PASI 75 at week 12 (2mg: 8.5 percent vs. placebo: 6.9 percent). However, at week 32, PASI mean percent improvement with CF101 2mg was 57 percent (P<0.001) compared to baseline, with linear improvement in PASI 50 (63.5 percent), PASI 75 (35.5 percent), PASI 90 (24.7 percent), and PASI 100 (10.6 percent). Thus, 2mg CF101 demonstrated efficacy and was well tolerated for moderate to severe psoriasis. The most commonly reported TRAEs in both trials were pruritus, unspecified infection, and gastrointestinal events.

LAS41008. Fumaric acid esters (FAEs), recommended in international guidelines for induction and long-term management of moderate to severe plaque psoriasis, are currently being evaluated for the treatment of psoriasis under different formulations. LAS41008 (dimethyl fumarate; DMF) is a medication currently in development by Almirall for the treatment of moderate to severe plaque psoriasis. Fumaderm is a proprietary blend of fumaric acid esters available on the market in Germany.

FAEs work via immunomodulatory and anti-inflammatory mechanisms, shifting the Th1/Th17 immune response toward a Th2 balance, acting to reduce pro-inflammatory cytokines.10,11 A 16-week, double-blind study accessing the safety and efficacy of the medication looked at coprimary endpoints of clinical response by Physician’s Global Assessment (PGA) and Psoriasis Area and Severity Index (PASI75), with a secondary endpoint of Life Quality Index (DLQI).12 Patients were randomized to either LAS41008 (DMF), LASW1835 (DMF and ethyl hydrogen fumarate salts; Fumaderm) or placebo in a 2:2:1 ratio, followed by a 52-week off-treatment period. At week 16, a greater proportion of patients treated with LAS41008 had clear/almost clear PGA scores compared to placebo (33.0 percent vs 13.0 percent, respectively, P <.0001) and significantly better DLQI scores.

In another Phase 3 randomized, open-label study, the safety and efficacy of secukinumab was assessed and compared to FAEs over a 24-week period.13 Results from the study showed that the IL-17 inhibitor had superior efficacy over Fumaderm. Key secondary endpoints included the percentage of patients achieving PASI-90 and a DLQI score of 0 or 1. At week 24, significantly more secukinumab-treated patients achieved PASI-75 compared to FAE-treated patients (89.5 percent vs. 33.7 percent). A greater number of adverse events was seen in the fumaric acid group (40 percent) than in those who received secukinumab (two percent). The most commonly reported AE in the fumaric acid ester group was gastrointestinal upset (15 percent) and lymphopenia (11.5 percent).

VPD-737. VPD-737 (Serlopitant) is a medication currently in development by Menlo Therapeutics, Inc (in a merger with Foamix Pharmaceuticals) for the treatment of pruritis in individuals with psoriasis. The small molecule drug is a potent oral antagonist of the neurokinin 1 receptor (NK1).The preferred ligand for the NK1 receptor is substance P, a molecule that is synthesized in both the central and peripheral nervous system.14 Substance P is a neuropeptide that functions as an early cellular responder to noxious stimuli, causing vasodilation and activating neurogenic inflammatory cascades.15 The molecule is important in activation of pain receptors and is thought to be involved in the initiation and propagation of nociception and itch, in-part through mast cell activation.16 Overexpression of gene transcripts of substance P and NK-1 have been observed within pruritic lesions in patients with atopic dermatitis and psoriasis.17

In a Phase 2, double-blind, randomized, placebo-controlled study assessing the efficacy of serlopitant for the treatment of pruritus associated with mild-moderate psoriasis, a once daily 5mg dose of the drug provided significant reduction in pruritus compared to placebo.18 Additionally, 33 percent of patients in the active treatment group showed a 4-point improvement in the Worst Itch Numeric Rating Scale (WI-NRS) at week 8, compared to 21.1 percent in patients receiving placebo.18 There were no significant differences in reported TRAEs between the two groups, and there were no serious adverse events (SAEs) in the treatment group

In another randomized, double-blind, placebo-controlled Phase 2 clinical trial, the safety and efficacy of serlopitant was assessed in patients with severe chronic pruritus of mixed etiology (including psoriasis and atopic dermatitis) for more than six weeks that was refractory to previous antipruritic therapies (topical corticosteroids and/or oral antihistamines).18 Patients were randomized to receive either 0.25mg, 1mg, or 5mg serlopitant, or placebo once daily for six weeks as monotherapy or with midpotency steroids and emollients. There was a dose-dependent decrease in pruritus with serlopitant treatment. At week 6, 43 percent, 38 percent, and 53 percent of patients in the 0.25mg, 1mg, and 5mg serlopitant groups, respectively, reported a 4cm decrease in average VAS pruritus score compared to 26 percent of placebo-treated patients, with a statistically significant improvement in itch symptoms being seen above placebo in both the 1mg and 5mg active treatment group, but not in the 0.25mg group. serlopitant was well tolerated and there were no serious TRAEs noted.

As our insight into the immunologic and molecular pathophysiology of psoriasis continues to develop, there are new opportunities for the development of medications that can benefit patients with the disease. While biologic medications have proven to be highly effective in the treatment of psoriasis, there remains a need for oral medications that offer similar success rate.

These novel treatments offer a welcome addition to the armamentarium of drugs for patients with moderate-severe psoriasis.

To learn more about this topic, consider attending the inaugural 2020 San Diego Dermatology Symposium from September 11-13, 2020 at the InterContinental San Diego (https://www.sddermsymposium.org/).

3. Elmets CA, Lim HW, Stoff B, et al. Joint AAD-NPF guidelines of care for the management and treatment of psoriasis with phototherapy. J Am Acad Dermatol. 2019.

CBD in the Holistic Practice of Dermatology