Verrucous Carcinoma of the Foot

Sara Andrews, and Brooke Walls, DO

Verrucous carcinoma is a rare, well-differentiated variant of squamous cell carcinoma that commonly arises on the feet.1 First-line treatment is complete surgical excision or Mohs micrographic surgery (MMS),2 although amputation is often performed due to local tissue destruction and late intervention.3 Following tumor resection, the wound is closed via primary intention or grafting.4 The last reported case of plantar verrucous carcinoma resection with wound healing by secondary intention was over a decade ago.5 We present the case of a 62-year-old male with plantar verrucous carcinoma treated by MMS with appropriate wound healing by secondary intention.

A 62-year-old Caucasian male presented for MMS of a 5.5 x 6cm biopsy-proven verrucous carcinoma located on the plantar surface and the right fourth and fifth interdigital space (Figure 1). The lesion began six months previously, and within two months rapidly increased in size. He reported difficulties walking due to the pain and the bulky nature of the lesion. Originally treated as a wart by his primary care physician, it continued to grow rapidly; he was referred to dermatology. Biopsy of the lesion demonstrated atypical squamous proliferation, concerning for well differentiated squamous cell carcinoma. 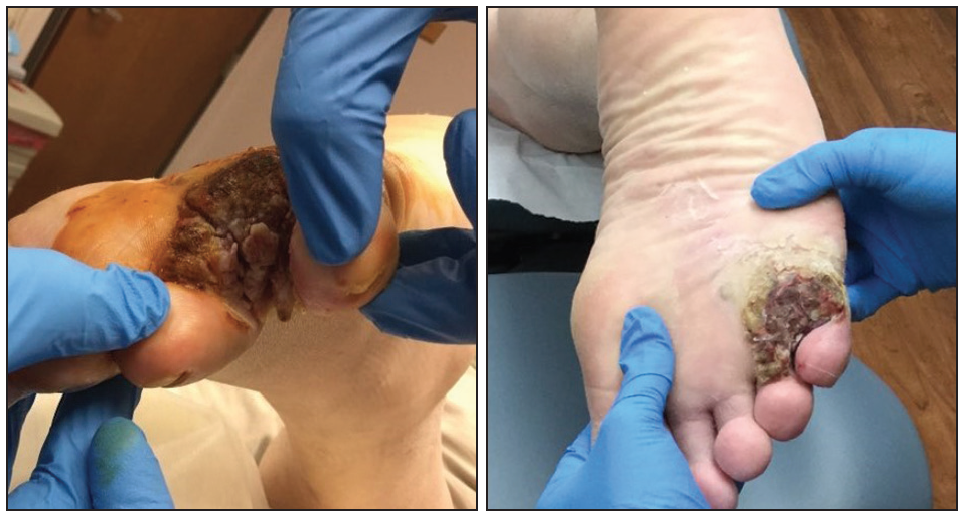 Further histopathologic review of the tumor revealed sections with extensive squamous proliferation with low-grade cytological atypia (Figure 2). There were irregularly shaped squamous nests in the stroma and increased cytological atypicia including aberrant keratinization focally. There were increased mitotic figures seen in the lower portion of the hyperplastic epidermis. Special stains for fungal microorganisms and acid fast mycobacteria were negative. Based on clinicopathological correlation, a diagnosis of verrucous carcinoma was made. As only a portion of the tumor was biopsied, there was concern for osseous involvement, but an MRI of the lesion demonstrated a 3.8cm mass in the right lateral forefoot with extension into the fourth and fifth interdigital soft tissues and abutment of the flexor tendons of the right fifth metacarpal. There was no evidence of osseous involvement. 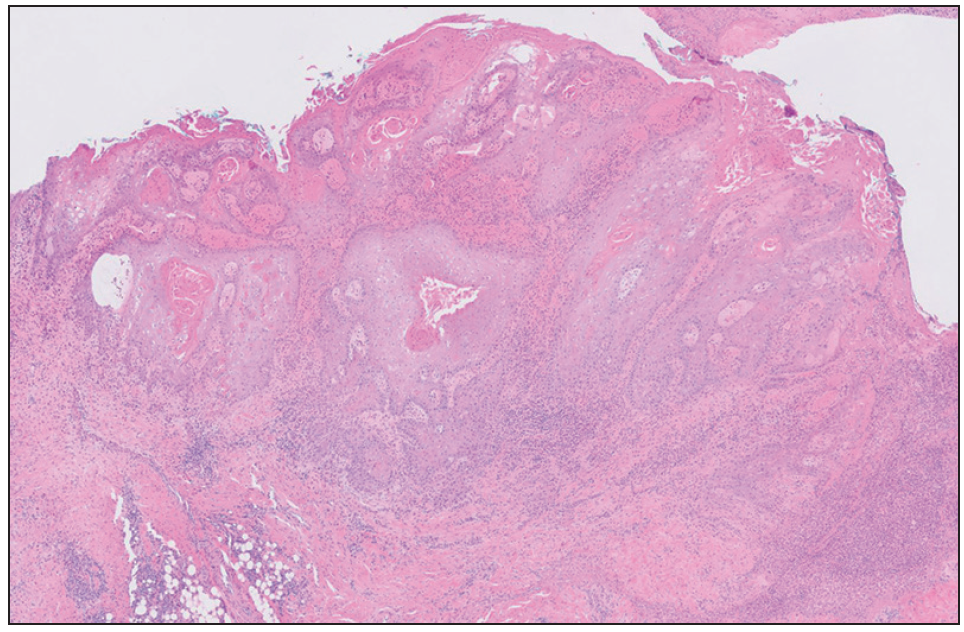 Complicating patient care is the remote location of our clinic and lack of specialty services. The patient and our clinic were being treated in Fairbanks, AK. The nearest in-network orthopedic surgeon was in Seattle. After discussion with the patient’s primary dermatologist, the patient was referred to our clinic for MMS. The main goal of MMS was to debulk the tumor and gain a more definitive idea of margin involvement. Five stages of MMS were necessary to obtain 98 pecent margin control. The tumor extended into the subcutaneous tissue abutting the fascial tendon, where there remained one focal point of a positive margin. At this point, maximum lidocaine dosage was reached and he was continually having intense pain; the primary dermatologic surgeon felt uncomfortable continuing further. Hemostasis was obtained by extensive electrocautery and a pressure bandage. The wound remained open since clear margins were not reached (Figure 3). 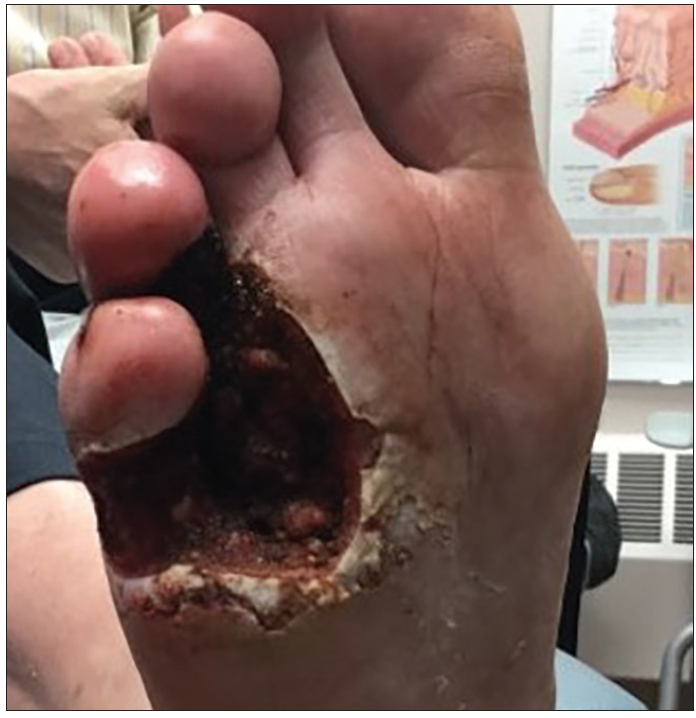 After discussion with leaders in the cutaneous oncology field, it was suggested that an orthopedic consult was necessary in order to discuss further treatment options, as we were unable to obtain 100 percent margin control during MMS. The referring orthopedic surgeon evaluated and presented the case at their tumor board. Due to lack of familiarity with this diagnosis, an aggressive approach was proposed to obtain 100 percent margin control. The final recommendation was complete amputation of the fourth and fifth metatarsals to ensure complete tumor removal. This recommendation was considered and eventually determined by the patient and his dermatologist to be too aggressive; the patient was healing well, in no pain, and quite satisfied with the outcome. The patient is young, healthy, and active. He was not ready for amputation and opted for careful observation. After much discussion of the case, it was decided since the patient was doing well clinically, the most appropriate plan of action was to perform a repeat MRI and maintain close clinical observation for the next five years. A repeat MRI was scheduled every three months for the first year, and then every six months for the next year. The patient’s wound was left open to heal by secondary intention.

At three-months post-op, the patient’s wound was healing well (Figure 4A), he reported little to no pain, and he appeared very happy. However, repeat MRI was not as reassuring and raised the concern for recurrent disease versus osteomyelitis. Because the patient was pain free and healing appropriately at this time, he was instructed to undergo a repeat MRI in two months, with plan to amputate if the MRI showed progression of disease. 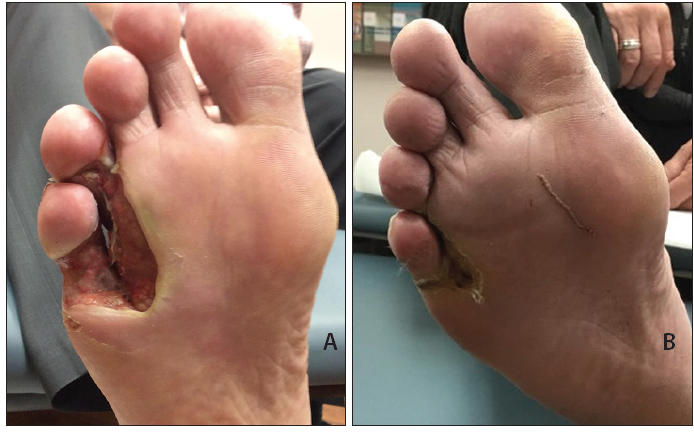 At 18-month follow-up appointment, all repeat MRI results were negative for disease recurrence and osteomyelitis. Clinically, healing by secondary intention resulted in a maximally recovered wound with a cosmetically acceptable appearance (Figure 4). In order to assess for disease recurrence, the patient was instructed to undergo repeat MRI screenings every three months, which have all been negative to date.

Verrucous carcinoma is a slowly growing, low grade variant of squamous cell carcinoma that has little potential for metastasis.1 This uncommon tumor affects males more often than females, and usually presents in the sixth and seventh decades of life.6,7 Many cases are associated with HPV-6 and HPV-11.1 The most common sites are the feet, oropharynx, and genitalia.8 Clinically, lesions appear white with exophytic papillomatosis or warty broad based proliferations.1 Although they have a negligible incidence of metastasis, they tend to be locally destructive, commonly invading soft tissue and bone.1 Histologically, the epithelium is characteristically hyperkeratotic and acanthotic with well-differentiated, minimally atypical cells.1 The surface may appear papillary or verrucous with parakeratotic invaginations.1

Obtaining tumor-free margins is necessary, as verrucous carcinoma tends to recur.3 MMS is preferred, as it is superior to other interventions in ensuring clear margins, reaching cure rates up to 99 percent.3 Other interventions include cryotherapy, laser therapy, topical chemotherapy and electrocautery, although the recurrence rates are higher.3 Radiotherapy is generally avoided, due to the potential for malignant transformation into squamous cell carcinoma.3

While it is clear that the current mainstay of treatment of verrucous carcinoma is surgical excision, preferably by MMS to ensure clear margins,3 guidelines for proper wound care post resection are not as straightforward. For minimally invasive tumors, wound care commonly includes closure by primary intention or grafting.4 Tumors that invade tendons and osseous structures often require amputation.4 The last documented case of wound healing by secondary intention post-surgical excision was published in 2006,5 and prior to that, in the 1980’s.9-14 Just as in the case of our patient, these published cases outlined that wound healing by secondary intention resulted in cosmetically acceptable and fully functioning feet. The wounds recovered appropriately; patients were able to ambulate timely and had no evidence of disease recurrence.

This case report serves as a reminder of the usefulness of wound healing by secondary intention after surgical resection of plantar verrucous carcinoma. This method of wound care, with close monitoring, negates the need for surgical reconstruction. If, however, there is presence of osseous invasion, surgical intervention may be indicated.

Disclosures: The views expressed in this article are those of the authors and do not reflect the official policy or position of the Department of the Navy, Department of Defense, Department of Veterans Affairs, or the US government.

Sara Andrews is a medical student in the School of Medicine at Rocky Vista University College of Osteopathic Medicine in Parker, CO.

Brooke Walls, DO, is a dermatologist at the Aspen Center for Cosmetic Medicine and Dermatology in Aspen, CO.

The Role of Hypnosis in Dermatology: More than Mere Suggestion

New In My Practice: Rx 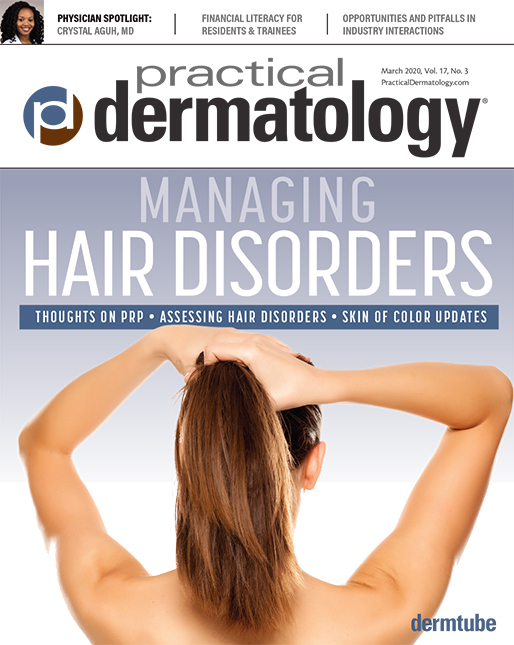