The results of this study support the use of pembrolizumab for the treatment of advanced melanoma regardless of BRAF V600E/K mutation status or prior BRAF inhibitor, with or without MEK inhibitor therapy. 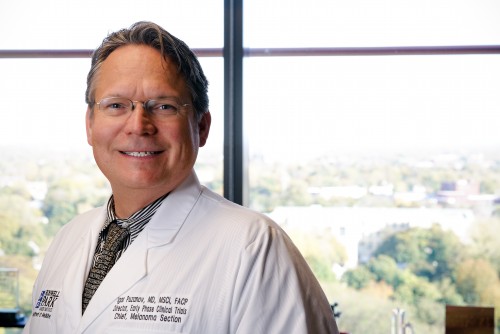 This retrospective analysis of three randomized clinical trials (KEYNOTE-001, KEYNOTE-002 and KEYNOTE-006), which appears in JAMA Oncology, involved 1,558 patients with advanced melanoma and known BRAF tumor status (BRAF wild-type or BRAF V600E/K-mutant melanoma) who had all been treated with pembrolizumab, some of whom had undergone prior treatment with BRAF inhibitors with or without MEK inhibitors.

The results of this study support the use of pembrolizumab for the treatment of advanced melanoma regardless of BRAF V600E/K mutation status or prior BRAF inhibitor, with or without MEK inhibitor therapy.

“Our findings confirmed the long-term, lasting benefits of pembrolizumab for patients with unresectable advanced melanoma and show that the effect is seen regardless of BRAF mutation status — and regardless of earlier treatment with a BRAF-targeting therapy,” says lead study author Igor Puzanov, MD, MSci, FACP, Director of Early Phase Clinical Trials and Chief of Melanoma at Roswell Park Comprehensive Cancer Center in Buffalo, NY.

“Coupled with what we know from separate studies about nivolumab, we see a clear picture of the benefits immune checkpoint inhibitors have had for thousands of people with advanced melanoma over the last decade.”

Some 40 percent of patients with metastatic melanoma have BRAF mutations. Of that group, 90 percent have an activating BRAF mutation.

“Our long-term view provides evidence to support giving immunotherapy early in a patient’s treatment, before turning to targeted therapies. This course of treatment is now the standard of care, but this is an important affirmation for this approach, which was not standard at the time these patients were treated,” Dr. Puzanov notes.

These study findings may help explain the striking decline in deaths from melanoma reported by the American Cancer Society (ACS) a few months ago. A January 2020 report from the ACS documented a 7 percent-per-year decline in the overall melanoma death rate between 2013 and 2017 in people ages 20 to 64.

“The study reinforces the fact that immunotherapy can significantly extend the life of patients with melanoma and even lead to cures,” Dr. Puzanov says. “But importantly, we also still see a role for targeted therapies. Having both of these treatment options at our disposal has helped to drive incredible progress against in a cancer type that was almost universally fatal a decade ago.”

The authors note that ongoing randomized controlled trials should support clearer and more specific conclusions about the optimal sequencing of these treatments.