Tuberous Xanthomas in the Setting of Mild Dyslipidemia

Allyson B. Brahs, BS, and Cynthia Lazzaro, DO

A 41-year-old Asian male presented with multiple, painless, yellowish-pink papules and nodules on the extensor surfaces of his elbows that were first noticed two years prior (Figure 1). Physical exam revealed smooth, dome-shaped, mobile lesions with firm-rubbery consistency at various stages of growth. The patient’s past medical history included hypertension, for which he took amlodipine and losartan-hydrochlorothiazide (HCTZ), initiated prior to the onset of the lesions. Family history was significant for cardiovascular disease with triple bypass in his father and a cerebrovascular attack in his grandfather. 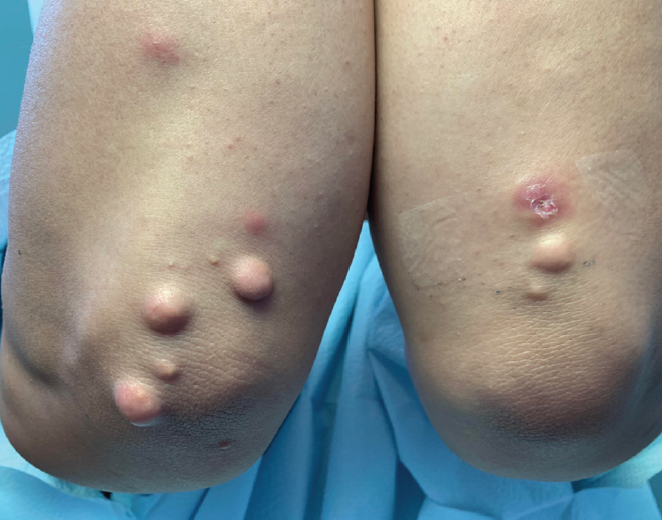 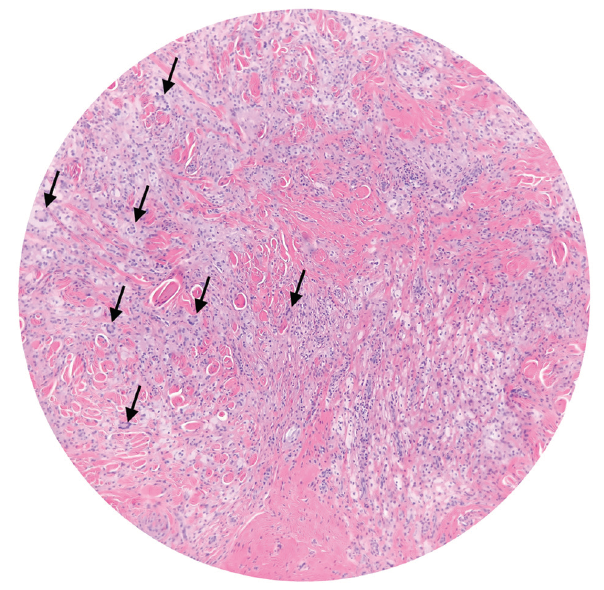 Tuberous xanthomas are localized collections of lipids, especially in dermal histiocytes, and are typically distributed along extensor surfaces. They are important signs of underlying hypercholesterolemia, a well-known risk factor for cardiovascular disease.1 Known causes of tuberous xanthomas include Fredrickson type IIa familial hypercholesterolemia (FH), type III familial dysbetalipoproteinemia, cerebrotendinous xanthomatosis, ß-sitosterolemia, and hyperlipidemia secondary to other disorders or medications.2 The familial hyperlipoproteinemias, FH and familial dysbetalipoproteinemia, both produce a total cholesterol value well over 300mg/dL,1,3-4 which exceeds the total cholesterol level in the present case.

Dermatology ranks in the top 10 for specialties with the highest average annual compensation, according to Doximity in its third annual Physician Compensation Report. However, data from the largest professional medical network show that after years of steady pay increases, national physician wages have plateaued for the first time since 2016.

Dermatology ranks sixth among specialties with an average salary for $455,000.

The report is based on the responses of nearly 90,000 licensed US doctors across six years, making it the largest repository of data available on physician compensation, Doximity says.

“Compensation transparency is a powerful force. As more data becomes available to us, exposing the pay gap between men and women, we see more movements to rectify this issue,” says Christopher Whaley, PhD, in a statement. He is lead author of the study and adjunct assistant professor at the University of California, Berkeley School of Public Health.

The 2019 Main Residency Match is the largest in National Resident Matching Program® (NRMP) history. A record 38,376 applicants submitted program choices for 35,185 positions, the most ever offered in the Match.

Cerebrotendinous xanthomatosis and ß-sitosterolemia, rare genetic defects that cause various sterols to accumulate, were unlikely because the patient lacked the neurologic symptoms and cataracts of cerebrotendinous xanthomatosis and lacked the arthralgia and childhood-onset of ß-sitosterolemia.2,5 Comorbidities, such as diabetes mellitus, nephrotic syndrome, hypothyroidism, paraproteinemia, and biliary obstruction, or drugs like ß-adrenoreceptor blockers, thiazide diuretics, steroids, retinoic-acid derivatives, and ritonavir can produce hyperlipidemic states that could lead to tuberous xanthoma formation2-3—though few studies have shown a direct correlation of these secondary causes of hyperlipidemia with tuberous xanthomas. With his elevated fasting glucose, elevated triglycerides, and reduced HDL, the patient fulfilled the criteria for metabolic syndrome,6 which has yet to be described as a potential etiology of tuberous xanthomas. Additionally, he showed evidence of slight hepatic impairment and was taking HCTZ. Secondary factors such as these and polygenic vulnerability cannot be excluded as contributing factors to his dyslipidemia and resultant tuberous xanthomas.

According to the National Cholesterol Education Program Expert Panel (NCEP) and Adult Treatment Panel III (ATP III) criteria that define lipid abnormalities, the patient’s cholesterol and LDL levels were classified as borderline high.6 This case is unusual because tuberous xanthomas are predominantly associated with significant hypercholesterolemia;1 however, this patient shows that even mild dyslipidemia can be sufficient to manifest tuberous xanthomas. The pathogenesis of this lesion resembles early atheroma formation.1-2 Therefore, since lipids can deposit in the dermis in such a mildly dyslipidemic state, it is possible that a similar cholesterol deposition could concomitantly occur in the arteries. Further research regarding additional factors that may be responsible for lipid deposition in the setting of mild dyslipidemia can elucidate insight on atherogenesis. In conclusion, this case demonstrates that tuberous xanthomas can form in mild dyslipidemia in the absence of familiar etiologies. We also hope this serves as a reminder for physicians to have a keen eye for such lesions as timely recognition can prevent morbidity and mortality associated with cardiovascular disease.

Have an interesting case to share? Practical Dermatology® is seeking submissions for the Resident Resource Center. A panel of physician editors will select a best paper for the year.

The winner will be recognized in Practical Dermatology® magazine and DermWire.com and receive a reward of a $200 American Express gift card.

Allyson B. Brahs, BS is a medical student at the College of Osteopathic Medicine of the Pacific, OMS III, Western University of Health Sciences in Pomona, CA.

Efficacy and Safety of Newly Approved Oral Sarecycline for Acne