CBD in the Holistic Practice of Dermatology

A growing body evidence suggests CBD may help with common symptoms of dermatologic diseases. Here’s what we know so far.

When an online survey was given to over 500 dermatologists in October 2019, more than 50 percent of respondents described patient-initiated cannabis discussion. However, 81 percent of dermatologists were uncomfortable with their knowledge of cannabinoid biology. Older dermatologists were more willing to prescribe cannabinoids.1 The visible (inflammation, redness, and sun damage) and invisible (pain, itch, sleep, and anxiety/depression) impacts of dermatologic diseases are common reasons patients inquire about CBD, as there are many sources (both reliable and unreliable) endorsing the effectiveness of cannabidiol for these maladies. This paper serves to bridge the gap between dermatologists’ knowledge and patients’ curiosity. 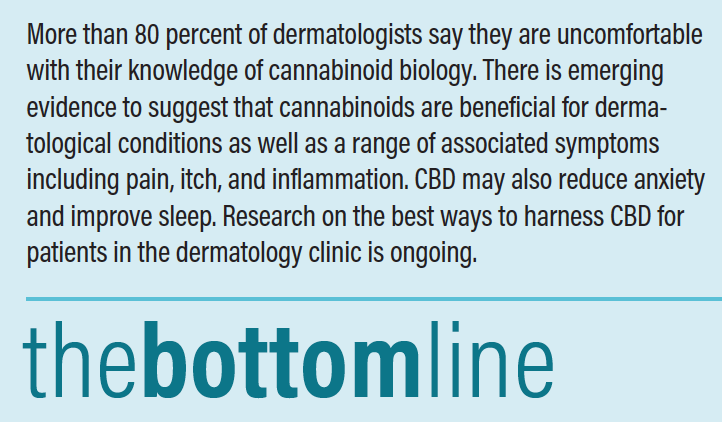 A Brief History of Cannabis

Cannabis has been used for medicinal purposes for centuries. Briefly, Cannabis sativa has two different strains of plants. One strain, marijuana, is high in tetrahydrocannabinol (THC), the psychoactive phytocannabinoid. THC is the chemical in marijuana that is intoxicating—colloquially known as the “high.” The other strain, hemp, is high in cannabidiol (CBD), a biologically active anti-inflammatory antioxidant phytocannabinoid. Hemp has less than 0.03% THC, and therefore is not intoxicating and has low abuse potential.

As of April 2020, 11 states have legalized the use of marijuana for recreational use, whereas 33 states allow the legal use of marijuana with a doctor’s recommendation. The Farm Bill, which passed in 2018, made hemp and its derivative products legal on a federal level in the United States; however, individual states, such as Idaho, Nebraska, and South Dakota, have made hemp-sourced CBD illegal with very rare exceptions.

Three systemic cannabinoids have been approved by the FDA since 1985. Nabilone (Cesamet, Meda Pharmaceuticals) was approved in 1985 for adults with chemo-induced nausea and vomiting. Dronabinol (Marinol, AbbVie) was approved in 1986 for adults with human immunodeficiency virus associated anorexia as well as chemotherapy-induced nausea and vomiting. Each of these are THC products, and their indications and actions are limited. THC related cannabinoids are not the focus of this paper.

Epidiolex (Greenwich Biosciences) is a pure pharmaceutical grade CBD that was approved by the FDA in 2018 for the treatment of rare forms of pediatric seizure disorders in ages two and up. It is the only CBD based cannabinoid approved in the US; however, in Canada and Europe, Sativex, a combination of delta-9-THC and CBD, is approved as an oral buccal spray for spasticity and neuropathic pain. Aside from Epidiolex, the medical use of CBD is in uncharted territory. Many unregulated products are being formulated, orally and topically, with claims marketed toward consumers for a variety of clinical and cosmetic applications with little data regarding efficacy or safety.2 Dispensaries advertising over-the-counter CBD products make unsubstantiated claims regarding CBD effectiveness for rejuvenation, itching, pain, sleep disorders, anxiety, and depression.3 The concentration of CBD in over the counter formulations is usually incorrect—50 percent have overstated the concentration and 30 percent have understated the concentration and that, coupled with batch-to-batch and manufacturer variability, may result in inconsistent results.4

A number of excellent reviews about cannabinoids in dermatology provide an overview of the endocannabinoid system (ECS).5,6 The ECS is comprised of cannabinoids, the proteins that regulate their metabolism, and cannabinoid receptors.7 Skin cells and immune cells have cannabinoid receptors on them. The two most prevalent cannabinoid receptors are CB1 and CB2. CB1 is distributed mainly in the central nervous system. THC binds with high affinity to CB1, which results in its intoxicating actions. CB2 is found in high concentration in immune cells and cutaneous nerves. Both CB1 and CB2 receptors are in synovial tissue.8 These receptors can be bound by endogenous or exogenous (e.g., THC) cannabinoids. The two most common endogenous cannabinoids are anandamide and 2-arachidonoyl glycerol, which are on-demand neurotransmitters that are released after nerve depolarization from post-synaptic cells and serve to regulate neurotransmission. The ECS is just beginning to be explored and targeted. CBD does not appear to exert effects through the binding of CB1 or CB2 receptors. Instead, CBD appears to affect the metabolism and reuptake of endogenous cannabinoids enhancing their effects. In addition, direct and indirect effects are caused by binding a variety of receptors including transient receptor potential vanilloid type 1 (TRPV1),9 G protein-coupled receptor 55 (GPR55),10 and 5-hydroxytryptamine receptor subtype 1A (5-HT1A).11

In the March 2020 issue of Practical Dermatology, Matthew Zirwas, MD addressed the growing interest among patients about cannabidiol (CBD)12 despite a scarcity of data involving CBD for human dermatological conditions. Many studies investigating CBD for medical conditions fail the required standards of quality. CBD may have a positive impact on acne, the most common skin disease. CBD applied to cultured human sebocytes exerted an anti-inflammatory, anti-proliferative, and sebostatic effect. Taken together, these characteristics are all promising findings for a novel anti-acne therapy.13

A three case observational study of patients with epidermolysis bullosa (EBS) treated with topical CBD found that patients reported improvement in pain and blistering as well as faster wound healing.14 In addition, a small open label study involving patients with psoriasis (n=5), atopic dermatitis (n=5), and scars (n=10) who applied a topical cannabidiol to lesions twice a day showed skin evaluation improvements at three months with no adverse events.15 Recently, topical application of CBD in an in vivo mouse model demonstrated an increase in the cytoprotective heme oxygenase 1 (HMOX1) enzyme, which has antioxidant, anti-inflammatory, and anti-apoptotic properties. Additionally, CBD increased keratinocyte proliferation, specifically keratin 16 and 17, which are associated with wound repair and may be in part why we see a therapeutic effect in EBS.16 Interestingly, this same HMOX1 enzyme, which is upregulated by CBD, has been reported to have a protective role against UV-induced oxidative stress.17 Additional basic science research demonstrated the cytoprotective activity of CBD in cultured fibroblasts against ultraviolet radiation.18 Further studies may elucidate the role of CBD in photoprotection in humans.

Despite the lack of studies investigating the effect of CBD on specific dermatological conditions, there is some evidence that CBD can affect prominent symptoms of several common dermatologic conditions: pain and itch. There have been studies in non-dermatological conditions suggesting that CBD can help pain. Animal studies on rats provided researchers with initial evidence of cannabidiol’s effectiveness for arthritis pain.19,20 In the animal model for rheumatoid arthritis, collagen-induced arthritis (CIA), CBD given either orally 25mg/kg/d or intraperitoneally 5mg/kg/d suppressed the progression of CIA and there was a reduction in collagen-specific CD4+ T cell proliferation, gamma interferon, and TNF-a.21 Despite these promising animal results, there is a paucity of studies researching joint pain in humans.

CBD may help both itch and pain, since those stimuli are detected peripherally by small diameter nociceptive neurons in the dorsal root ganglion and they express TRPV1. Additionally, central nervous system itching involves serotonergic neurons, which can potentiate itch by activating 5-HTR1a receptors.22 One small placebo-controlled trial involving patients with peripheral neuropathy of the lower extremities revealed that application of a topical oil containing 250mg of CBD per three fluid ounces was statistically superior to placebo in reducing intense pain, sharp pain, cold and itchy sensations, with no safety signals reported over four weeks.23 In an animal model, paclitaxel-induced neuropathy was diminished by CBD and 5-HT1a receptors were involved in the neuroprotective effect.24 Currently there are nine trials investigating CBD for pain listed on clinicaltrials.gov.

In rats, intraperitoneal CBD injections resulted in an increase in total percentage of sleep in the CBD group compared with placebo.32 However, most studies in humans that have investigated the effect of CBD on sleep have only looked at sleep as a secondary measure. In a 2016 study, Shannon and colleagues examined a cohort of 72 adults with anxiety and sleep complaints treated with oral CBD at a dose ranging from 25mg to 175mg per day. Objective measures of anxiety and sleep showed improvement at one-month follow up, but the sleep data fluctuated over the later course of the 12-week study.33 Thus it was unclear if the benefits in sleep were due to the reduction of anxiety or due to a primary effect of CBD.

Anxiety: An international multicenter prospective study analyzed the association of anxiety and depression in patients attending an outpatient dermatology clinic for various skin disorders via a questionnaire and clinical exam (n=3635). Patients with atopic dermatitis, psoriasis, hand eczema, and leg ulcers had the association of anxiety and depression.34 A 2018 meta-analysis examined the association of atopic dermatitis with depression, anxiety, and suicidal ideation in children and adults and they found a significant association between atopic dermatitis and both depression and anxiety.35 In 2017, a large review of observational studies and clinical trials sought to quantify the prevalence of anxiety in patients suffering from psoriasis. They found a prevalence of anxiety in patients with psoriasis that ranged between seven and 48 percent, which was significantly higher than controls in two of three studies. Additionally, several other studies showed improvement in anxiety when psoriasis was treated.36 Finally, patients with acne and pigmentary disorders frequently have comorbid anxiety.37-40

There is a current lack of evidence that CBD is effective for the treatment of anxiety. However, one small study of 24 individuals with Social Anxiety Disorder (SAD) (compared with 12 control patients) was conducted where participants were treated with CBD (versus placebo in the control group) prior to a simulated public speaking task.41 The CBD treatment group performed better than controls with significant decrease in anxiety, cognitive impairment, and hyper-alertness. Pretreatment with CBD reduced the anxiety level in the patients with social anxiety to near that of healthy controls during the simulated public speaking task. In addition, there is a single case report of a 10-year-old child with post traumatic stress disorder who was refractory to traditional psychiatric medications and was treated with 25mg of CBD orally at night to help with sleep as well as 6-12mg of CBD orally during the day for her intermittent anxiety with dramatic symptom reduction.42

Many common dermatologic conditions have associated subjective complaints that need to be addressed for comprehensive care of patients. There is emerging evidence to suggest that cannabinoids are beneficial for dermatological conditions as well as a range of associated conditions including pain, itch, and inflammation. The transformation of cannabinoids from an herbal supplement into a highly regulated prescription drug is progressing rapidly. Future alternative methods of administration (transdermal, intranasal, etc.) will likely improve bioavailability. Additional data on the effects of CBD for sleep and anxiety may be relevant to a more holistic therapeutic approach to dermatologic disorders.

1. Murphy EC RE, Friedman AJ. Knowledge, Perceptions and Attitudes of Cannabinoids in the Dermatology Community. Journal of the American Academy of Dermatology. 2019;81(4):abs 86.

Dr. Cather is a board-certified dermatologist in private practice at Mindful Dermatology and Modern Research Associates in Dallas.

In the Pipeline: What to Know About Tapinarof 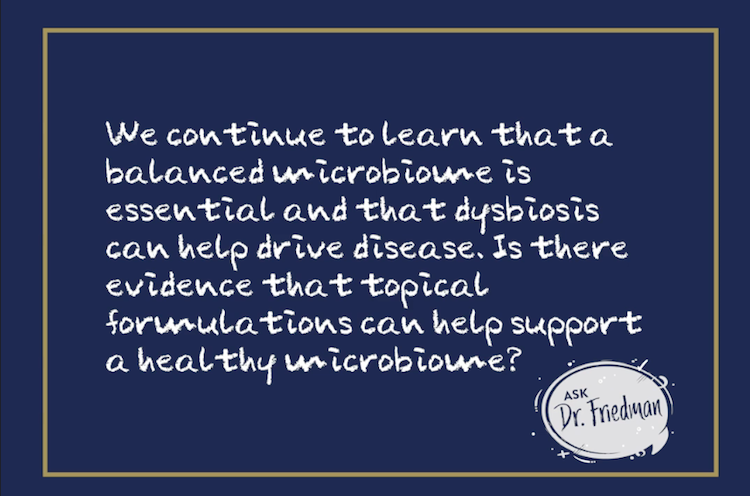