Facing the Impact of Rosacea

Results from several recent surveys shed additional light on the experience of patients living with rosacea. Findings from the latest National Rosacea Society (NRS) survey indicate that most rosacea patients are satisfied with the oral and topical prescription therapies they are using. Of note, however, is a trend among older patients to use older treatments, rather than newer, potentially more effective treatments. In fact, 54 percent of rosacea patients age 60 or older are still using the first therapy approved for rosacea, compared to 41 percent of those under age 60.

The survey of 1,714 rosacea patients also found that 42 percent of respondents 60 and older have never changed their treatment regimen, compared to only 19 percent of younger patients.

Respondents younger than 60 were more than twice as likely to use topical ivermectin than those 60 and older (20.7 percent vs. 9.1 percent) and five times more likely to be using topical oxymetazoline (6.9 percent vs. 1.4 percent). Prescription azelaic acid foam was a frequent choice among both age ranges, with 15.1 percent of those younger than 60 and 13 percent of those 60 or older using the treatment. About 22 percent of respondents said they used an over-the-counter product to manage rosacea.

Topical metronidazole was the treatment most frequently cited as an abandoned element of patients’ regimens; 56 percent of respondents say they used it in the past. About 40 percent had used either prescription doxycycline tablets or extended release capsules, and 22 percent had used prescription azelaic acid foam.

Earlier this year, Beyond the Visible: Rosacea and Psoriasis of the Face, an expert report supported by Galderma Laboratories, revealed the extent of the hidden burden that rosacea and psoriasis of the face can place on affected patients. Among key findings, the study showed that approximately half of all those surveyed reported at least moderate depression.

Dermatologist Julie Harper, MD noted that the issue of depression warrants clinical consideration by dermatologists. She stresses the importance of educating patients and trying to understand their needs and treatment desires—something that may not be accomplished in the first office visit.

“I do think we also need to be asking, ‘What bothers you about this. Does this have symptoms? Does it burn? Does it itch? Does it sting? How does this limit you? Does this limit you socially? Are there things that you don’t do because of this? And I’m not just being nosy. Number one, I want to know how this is impacting you, because that’s going to help me to develop a plan and maybe even an outcome measure down the line,’” she says.

Asking the right questions helps the physician to assess each case and also sets the course for additional follow-up or referral, as needed.

“It gives us an opportunity when we ask all of these questions to then follow up on those. And I think we’re not going to know about depression and anxiety unless we ask about those things. But then once we do, making appropriate referrals when we need to,” Dr. Harper suggests. “That’s an area that I can improve. And I would say that probably most dermatologists can.”

Impact of Rosacea and Facial Psoriasis

— Beyond the Visible: Rosacea and Psoriasis of the Face

New in My Practice: Rx 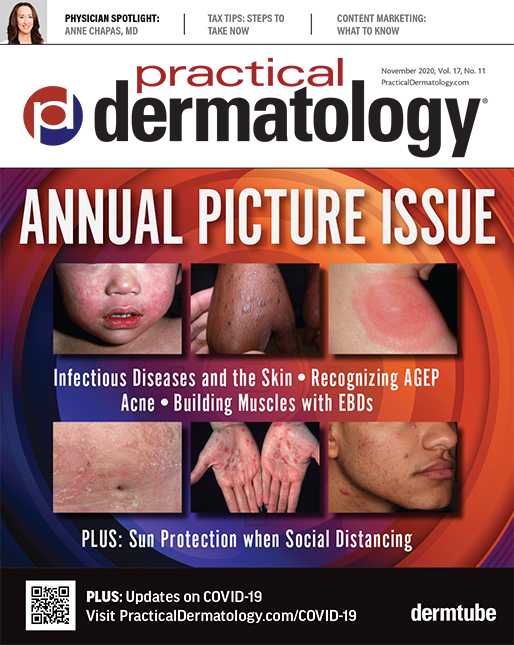